Over the last day or so I've spent a good while squelching those pompous knights and gutting samurai in the For Honor closed beta. The good news is that we don't have another Ubisoft optimisation mess on our hands. For Honor is a pretty tip-top game in terms of performance, as you can see in our For Honor Radeon R9 380 benchmarks.

For our benchmarks we played the For Honor closed beta with MSI's Radeon R 380 2GB, equipped with 2GB video memory. It’s backed up by 16GB DDR4 memory and an Intel Core i7-5820K CPU. For the test we took an average frame rate when playing through a length Free Battle. 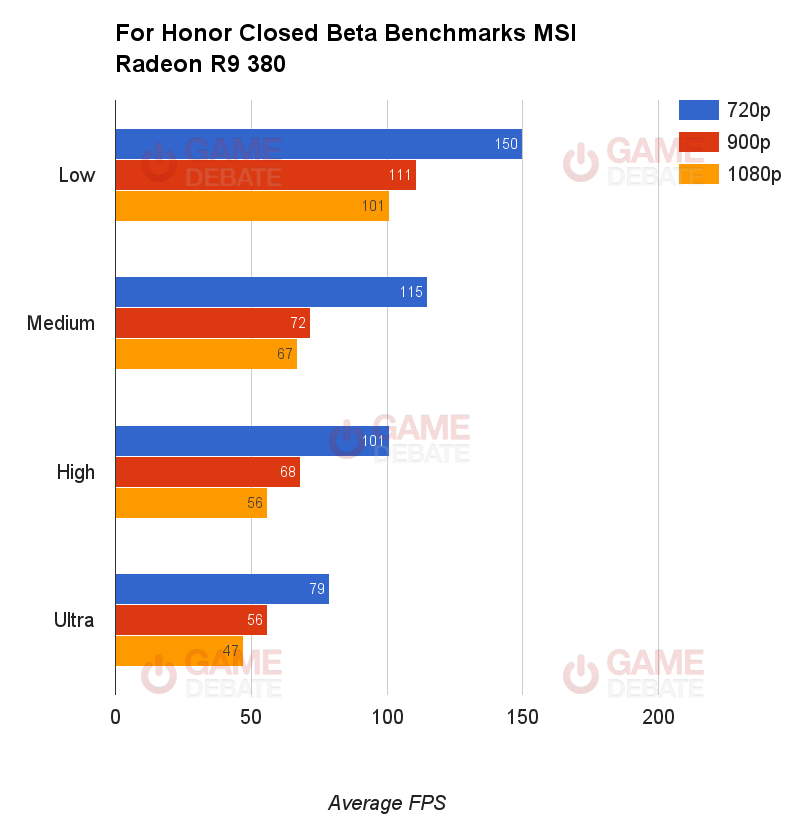 It has to be said, For Honor and looks and plays like a dream, even on a mid-range graphics card like the Radeon R9 380. Playable frame rates are achieved on every setting. Unlike a few other tests we've done recently as well, that 47 FPS on Ultra 1080p was smooth and stutter-free.

In terms of image quality I found there was a huge difference between the resolutions. Everything looks noticeably washed out even when just dropping down to 900p, and very blurry at 720p. If you can you're going to want to aim for 1080p and drop down the graphics settings rather than the other way around. I found the ideal level of performance could be found at 1080p / High. At an average of 56 frames per second this was the perfect balance between visual quality and resolution in For Honor.

When you set For Honor to the Extreme (Ultra) graphics preset the in-game tool says the maximum VRAM usage is 1944MB. This means the R9 380 was only just capable of playing at Ultra. Provided you have at least 2GB video memory on your graphics card then you should be fine playing For Honor on Ultra though.

The only graphics settings which wasn't altered by the Quality Preset was supersampling anti-aliasing. This is an incredibly demanding form of anti-aliasing and I do not recommend you turn it on. For point of reference my frame rate in For Honor on Ultra dropped from 47 fps down to 8 fps when SSAA was enabled.

For more on For Honor see our info on graphics presets and the For Honor Low vs Ultra graphics comparison sliders.

thanks for the reply :)

Yep, just tested out the beta and this games runs pretty good so far. I hope I can still say the same at launch.

Yeah runs even better now vs the technical test. I turn off dynamic reflections, set AA TO SMAA, and shadows to high and I get almost a locked 60fps.

Guys,I've been thinking about this game for a while now. Should I go and buy for my PC but I am not sure if it will run on my current laptop with the gtx970m or should I go for ps4 version?

Will run flawless on the 970m. Just tweak a few settings to get 60fps (the 380 is only be slightly faster).

people have no honor in for honor.

yea sadly, no team play as well everyone run for kills and score

i was thinking about that also :P

Still not interested in this game, Not my type, you can also blame the always online requirement.

But at least the optimization is (near) flawless.

I thought i would be and its actually quite fun, i registered in the BETA just for the hell of it to see if i could get in and i did. i invited one of my friends and he LOVES the game so kinda glad i got in and invited him. Otherwise if they fix the controls i see it being quite fun, a bit easier to play on controller it seems but the game is very beautiful.

i play 1on1 only (i dont have many friends in uplay) now gave 2 invites. I like the 1on1 it's awesome. If ubi add some ranking it would be better. But i noticed when i'm changing up some gear my game crashes. I hope they'll fix it in the final game.

Can confirm, runs like a dream, running at max settings with a constant 60+, looks great.

Ubisoft have been knocking it outta the park with regards to optimization of their recent titles. Very excited about Ghost Recon: Wildlands as well given that they're starting to give PC gamers proper respect.

Optimization maybe, but server and everything else is HORRID. I got into the closed beta and its quite fun, controls DEFINITELY need fine tuning as they are awful, the servers are still garbage and the game crashes quite often, that and errors all the time for invites (and yes i know its still in BETA but with a 2week release thats piss poor). Also steep/forhonor have some serious issues with bitdefender (anti cheat exe needs to be added to exclusions)

My setup is at extreme (ultra) @ 1080p without SSAA and stays above 60 FPS and is usually in the 70s sometimes 80s. Lowest I've seen it go was 54 FPS in the benchmark at one specific spot. I was honestly not expecting to play it fully at ultra but it surprised me at how well it's optimized. If only all games could be this optimized.

Well, resolution can hit FPS, but you should be higher than me still. xD

you should probably buy a new cpu sometime soon if you dont want your gpu to be bottlenecked, just sayin