Now here’s a little something to blow your mind. Grand Theft Auto 5 managed to sell more copies in 2016 than it did in 2015. Take Two and Rockstar’s behemoth really is the cash cow that never ends.

The latest sales report shows that GTA 5 has now reached a major new milestone. Take Two’s powerhouse has now sold through more than 75 million copies, making it the fourth bestselling game of all time behind Wii Sports (a pack in - 107.86 million), Minecraft (107.86 million) and Tetris (495 million). Good luck catching Tetris Rockstar. In total the GTA franchise has now sold through 255 million units.

Where things get even more interesting however is when you notice Grand Theft Auto V actually managed to sell more units in 2016 than it did a year earlier in 2015. Despite sitting at the top of bestseller lists for over three years, the number of copies being sold is actually increasing. 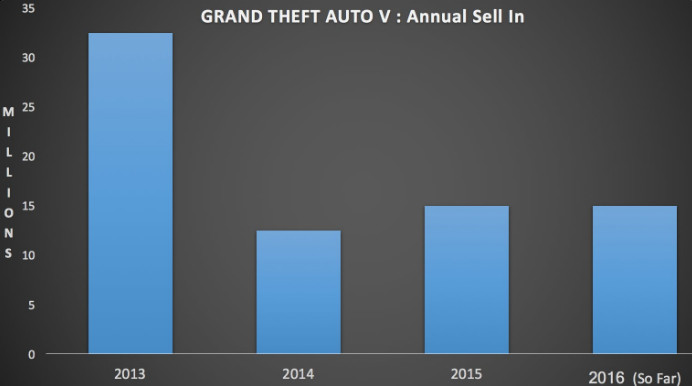 A lot of this is going to come down to the 50% price cuts but it’s still an impressive achievement. Every time you look at the . For point of reference - around 3 million more copies of GTA 5 were sold in 2016 than in 2014, the year of the PS4 and Xbox One remaster.

It’s kind of mind-blowing and it shows that Rockstar’s slow and steady approach pays dividends. Take Call of Duty as an example. The best selling title in the series is Modern Warfare 3, at 26.5 million. Rockstar has effectively sold through three times as many copies as the bestselling COD ever.

It's amazing to think there's still of audience of millions out there still getting ready to buy GTA 5, anyone on GD still waiting on a steeper discount? How have you taken to GTA Online? Let us know!

GTA V is a game where the gameplay Story and everything else is well made and creative so this comes as no surprise.Also there's no denuvo here :D

If there is quality content, people will surely pay.

If there are steam sales, people will surely buy it :)

Haha, I'd like to know that as well :P

40/60? I remember when I was a kid and my friends always got the new cod at their birthday :D

And does it use Denuvo ? Nope, the publishers should learn from this..

Really is a testament to their release model and the post-release treatment.
Yep, still play Online everyday with my mates. A lot of fun :)

I'm not surprised it sold well on consoles, since Rockstar essentially rolled out the red carpet for console players, PC players got crapped all over though. For one, the game took more than a year to release after it had released on PS3/XB360. Then when they roll out online, PC players getting banned without reason.

As a PC gamer, Rockstar and their hostility towards PC gaming has not earned my money. I still do not own this game, and don't intend to buy it.

and still, you can't insure your car in single player

Could GTA games be considered AAAA titles? They have huge budgets...

No, I believe COD should be Number 2, as in toilet talk

i believe it's due to all those mod menu users being banned and having to keep re-buying the game. Not to mention those who make money dropping in game cash. Also having to buy the game over and over again if you play on different systems. I Bought GTV 3 times for my son (PC, PS4, Xbox One).

i have no idea why are u down voted that much but man why did u need 5 copies ? And i understand if u have 2 PCs but 2 XBOXes damn ( no hate just wondering )

Upvote for our rich guy over here haha. Your son is clearly the winner here

Quality over quantity. It is not rocket science devs.

Yeah, it ain't music theory either