An interesting email from Nvidia plopped into my inbox overnight. Team Green is going to be hosting its own Nvidia GeForce GTX event on the very same evening as AMD’s Capsaicin and Cream livestream.

The Nvidia GeForce GTX PC Gaming celebration will kick off at 6:30pm PST on February 28th in San Francisco, promising an “evening of awesome”. GeForce fans are all invited to attend the event (full address still to be revealed), however it is first come, first served, so if you’re in the California area you’ll have to get down there early to guarantee a spot.

The event itself runs from 6:30pm through to 11:30pm and will be an “evening of awesome PC gaming, hardware, tournaments and of course free food, drinks and a few other amazing surprises.” 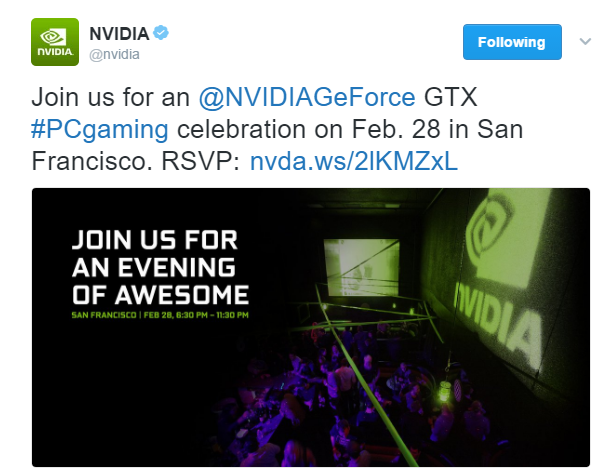 If I were a betting man I’d hazard a guess that, along with being a fan-oriented event, this will also play host to the reveal of the GeForce GTX 1080 Ti flagship graphics card. Nvidia has evidently got wind of a Vega 10 reveal the very same day so it’s getting its own enthusiast option out there even earlier.

The event is tied in with GDC (Game Developers Conference) 2017, which runs during the same week. Nvidia has a history of revealing GeForce graphics cards at this time. Taking the wraps off the GTX Titan X in 2015, for example, so it’s looking likely we’re going to hear something about the GTX 1080 Ti or potentially even the mooted Pascal refresh.

You can read full details of Nvidia's event here.

Any US GD’ers going to have a go at getting over to this event? What do you think Nvidia plans to show? Let us know!

And the price will sky rocket. Unlike the performance differences.

Hope this doesnt turns out to be another CES kind of announcement. I´m earger to get that son of a virgin TI already.

Knowing nVidia, the price is going to be so ridiculous that 0.01% of gamers are willing to buy it. It's not a question of affording it anymore, it's a question about whether you truly need that 30% or so additional juice when compared to 1080. I'm hoping Vega is competitive enough to make nVidia lower their prices, even a little bit, but that remains to be seen. In terms of price per performance, AMD usually wins so I'm most likely going to buy Vega anyways...

You are most lucky man

Yes its price is the biggest thing

I think not so much in terms of price :/

We can all dream