Kingpin’s legendary overclocking skills regularly border on the ridiculous, but his efforts with an Nvidia GeForce GTX 1080 Ti Founders Edition graphics card are just totally obscene. He’s managed to break the previous world record speed of 2.5 GHz (his own record), ramping a GTX 1080 Ti all the way up to a frighteningly fast 3 GHz. That’s more than double the standard base clock speed of 1480 MHz.

Naturally Kingpin did just crank up the voltage and hope for the best. He used liquid nitrogen to keep the GTX 1080 Ti Pascal GPU ice cold, but even that wasn’t enough. In order to jump the additional 0.5 GHz he had to modified the graphics card’s PCB in order to bypass the voltage locks. In short - don’t do this at home.

All his efforts were undoubtedly worth it though. He squeezed it up to a peak of 3024 MHz, reaching a pixel fillrate of 229.3 Gigapixels/s and 583.7 Gigatexels/s. 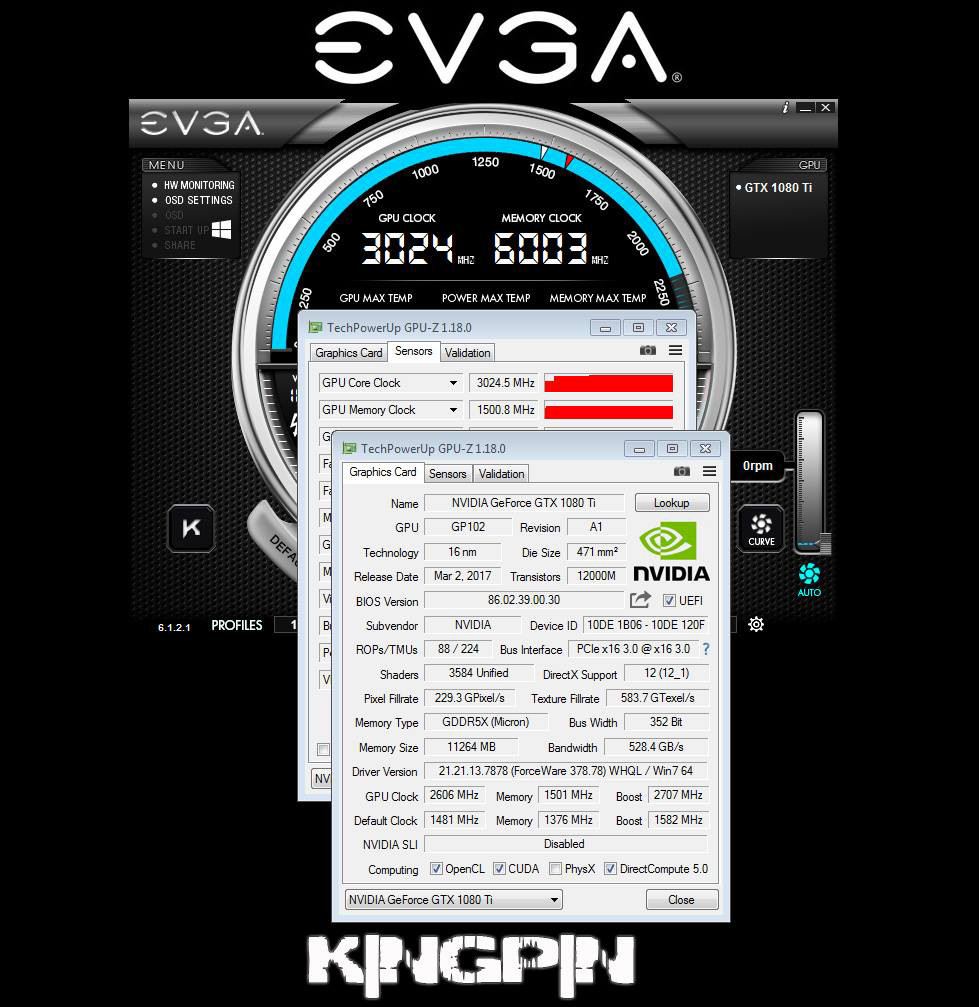 That not only marks the fastest speed a GeForce GTX 1080 Ti Founders Edition has ever been clocked at, but it also takes the crown as the fastest Pascal chip of all time.

We know already that the GeForce GTX 1080 Ti is a great overclocker right out of the box, but this is on another level. For the standard user like you or I, 2 GHz is a much more reasonable target with air cooling, and slightly higher if you want to go the whole hog and get some liquid cooling installed.

As an owner of two 1080FE and two 1080Ti FE I've noticed that the Ti cards overclock better and keep cooler (and quieter) than the 1080s do. Really weird!

Dunno man, my 1080s are hotter at the same clocks than my Tis and that's with 40% less CUDA in them. I didn't necessarily mean clock-for-clock, but in my case the Tis are cooler, quieter and ramp up higher with less help. Though my 1080s did reach 2100.

Lmao :D There's one problem though. No matter how much water u have there, if u can't conduct all the thermal output to all of that water instantly, you're still gonna fry the GPU.

then we need absolute zero -273C

I'm waiting for Volta as I may not be able to upgrade my rig until early 2018 and I'm also keeping an eye on AMD's Vega.

Not much to brag about anymore :)

What's up with this insane negativity?

Actually... in my experience the 1080Ti overclocks better and keeps cooler than the regular 1080 (I should know - I have two of each in my rig). I know, it's weird, but the Ti cards are something else!

Unless you are playing on Neptune, what exactly is the point of such overclocks?

LOL I had a mouth full of coffee when I read that ...now I have to go and clean my monitor thanks...+1 on rep for making me laugh!

I would have said Pluto myself lol

i will sit quite about giving u an opinion cuz some overclockers "freaks" will down vote me. But overall some people overclock the vid card for speed. Some are overclocking i think 4 fun like them. I never overclocked a video card so i dunno. Like your increasing your car HP from 500 to 530

You're right. OCing is also a hobby. I have been doing it since my 3dfx days!

this card will it hit thermal threshold at stock in venus

Holy crap that is so fcking awesome WTF