I think last week’s Destiny 2 leak may have caught Bungie and Activision on the back foot. Destiny 2 has now been officially announced via Destiny’s official Twitter account, which posted an image of the game’s logo. No trailer, no screenshots, no nothing. That’s just about the dampest of squibs you could ever think of, suggesting Bungie has been forced to get out there and confirm Destiny 2 before it was good and ready to. 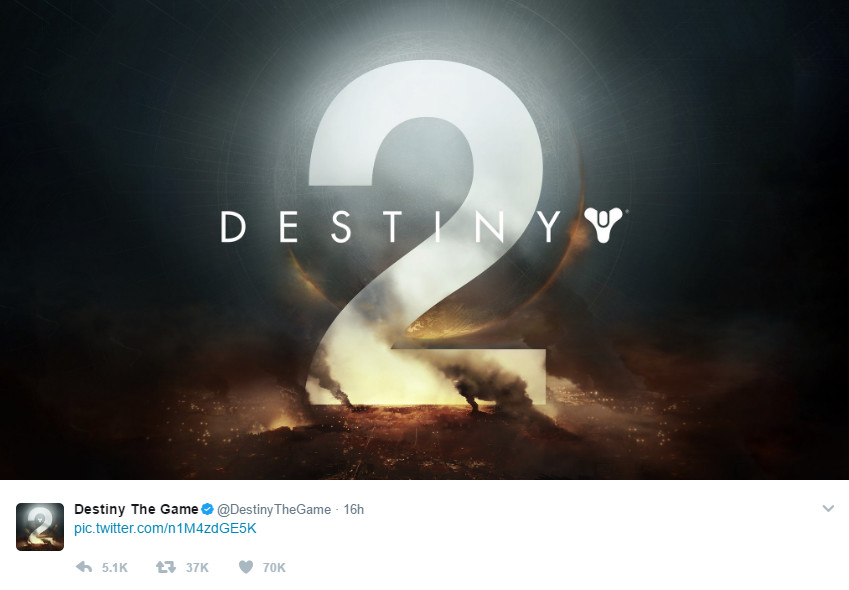 The logo itself looks bang on with the leak, essentially confirming the info on the poster - Destiny 2 will launch on September 8th worldwide and will have a PS4-exclusive beta test event in June, presumably kicking off after Sony’s E3 2017 press conference.

Delving a little deeper into the teaser image, it appears as if The Last City, the final remaining city on Earth which was protected by the Traveler, has been razed to the ground. There’s the suggestion here that perhaps the Traveler has turned against Earth.

It would be fair to say the concept behind Destiny’s lore was neat but the delivery was beyond awful. The main campaign made practically no sense unless you unlocked the lore and accessed it via the official Destiny website, which was just a pain in the arse. It all got a bit too convoluted by the end and destroy The Last City would be a decent method of wiping the slate clean and inviting in new players.

Aside from the image we've basically got nothing, not even the available platforms. All the rumours so far have pointed at a PC release also so we've got our fingers crossed in anticipation of that. Surely Bungie can't skip PC again?

It's a really big potential title, they could take the spot this year, hopefully

If it comes to PC, I will insta-buy it when it comes out and it doesn't suck.