AMD went in big on streaming game service LiquidSky during its Capsaicin and Cream live event last month. This cloud streaming services picks up the broken pieces of OnLive and looks to deliver a true Netflix for games, all supported by AMD Radeon Vega hardware, naturally. Up until now you could sign up and register your interest for the LiquidSky closed beta. I didn’t get picked sadly, but fortune favours the patient because LiquidSky has just announced it’s now in open beta and available for all. Or is it? Let’s find out.

OK, so first of all you can now download the LiquidSky application directly from their official site. The minimum requirements are pretty low-end as well, asking for Windows 7, 2GB RAM, integrated graphics and 250MB free hard drive space. Not a problem.

Click download and you’re given a straight up executable, no installation really required. The only thing I had to do was give LiquidSky permission to “create a firewall exception”. Sure, poke all the security holes in my firewall that you want, I just want them sweet games. 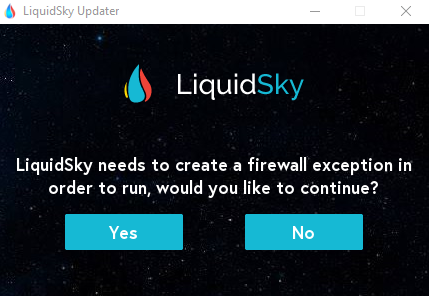 Once it loads up, the whole thing is looking decidedly slick. My memories of the clunky OnLive experience seem so distant. The first thing that’s being asked of me is to log-in, migrate an account, or create a new account. Obviously my first instinct was to login using the same account I’d user to register my interest for the Closed Beta. It wasn’t recognised, so I forged ahead and made a new one.

The account creation process was pretty straightforward and care free. I just provided an email address, gave my date of birth and chose a password. Then LiquidSky pings all of its data centers around the globe and finds the fastest one for you. It’s recommended you’re within 1500km, which seems a fair distance.

Success! London is the best data centre for me. A ping of 11, not bad! 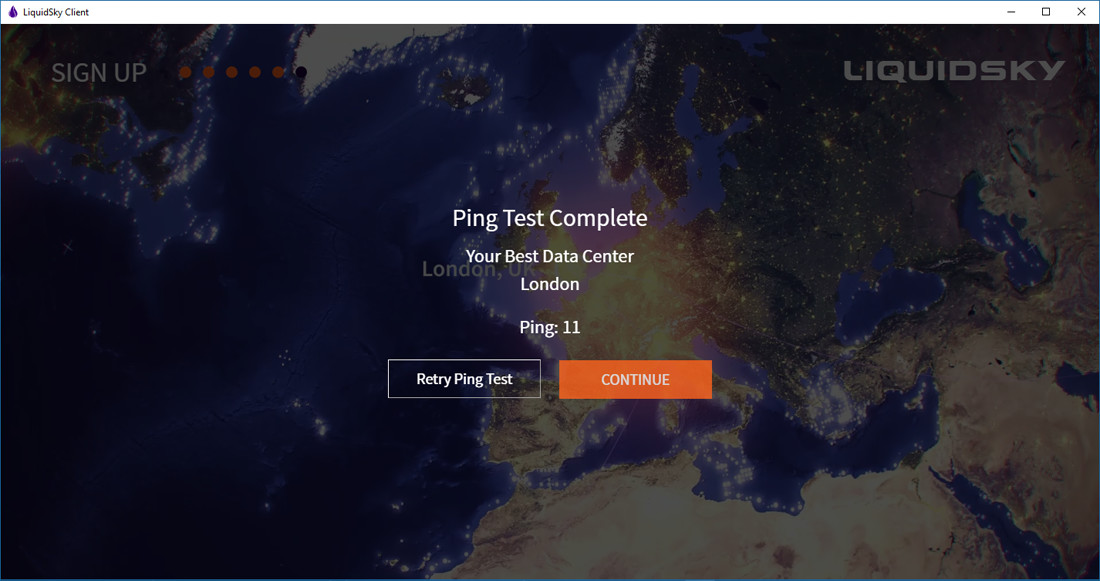 Now it was just time to verify my email account and test out my login credentials. Voila, username ‘farmmydata’ is logged in and ready to rock.

Oh wait. No I’m not. My beta status is currently “Your Boarding Group is LD21-01. Your boarding group will be called in the near future. Skip the line and purchase instant access to your SkyComputer now.” Umm, no chance, I’m not paying to access a beta test.

But what’s this? ‘Earn SkyCredits Now’. For those after a free ride it turns out you can watch a bunch of 30 second adverts in order to accrue SkyCredits, which can in turn be spent on gaming time. Each advert is worth 40 SkyCredits, with a maximum of 180 free SkyCredits per day. Which means watching 2.5 minutes of adverts a day, and you’re only getting half the credits for the final advert. 720 SkyCredits will get you a maximum of 12 hours of gaming, which isn’t too bad. You can earn that amount in 4 days, so you’re getting three hours per day.

OK, so I may have to put a bit of work in, but it is possible I can use the LiquidSky open beta for free. I eagerly click ‘Earn SkyCredits Now’. An notification pops up -  “Currently no opportunities to earn skycredits”.

I glumly close the window. Right now the LiquidSky open beta isn’t quite as open as it would have you believe. So be warned, you’re creating an account on the promise of an Open Beta which you’re still going to have to wait in line for. Not the best start to be honest, and I feel a bit duped into downloading the LiquidSky client and creating an account.

I’ll bring you more in the LiquidSky saga just as soon as I can actually get into the damn thing. I’m itching to find out what the streaming performance is like.

Fellow GD'er Shaheryar has also been busy trying to get LiquidSky running 4,000 miles around the globe, and he hasn't had a great deal of luck either. Quite the opposite in fact:

"Liquid Sky is probably the most interesting product in the Cloud market which is primarily aimed for consumers in the entertainment segment. Theoretically you go out travelling with your phone and/or a laptop, and with Liquid Sky your games travel everywhere you do. That's a cool idea.

You know these startups come around and they linger in the market for sometime, creating a big bang. For instance Liquid Sky already has 1 million users, it was the highlight at AMD's Vega Conference and more. Yet they can't seem to handle the huge interest from the gaming community.

I registered around the time when it first appeared in the news. Around 4 to 5 months back I think, it was in closed Beta. Now it's in Open Beta 2.0 and for some awesome reason, their system says my account doesn't exist. Tried migrating; no luck.

So my rating for this entire startup is - Awesome idea, disappointing execution. I mean, what was the point of signing me up so far back then, just to have my account on the mailing list? Seriously.

Their interaction with the new user is really unprofessional in this regard because the basic idea of startups is to attract users and only then can they make some profit. But what if a user can't even experience the product?

So the thing is: Liquid Sky is the awesome ice cream cake which you can see in the bakery window, but door's closed and customers aren't welcome."

Anyone else had any luck with LiquidSky?

zzzzzzzzzz just release vega. I want to see it potential

LiquidSky seems like a too-good-to-be-true-scam kind of thing. It's like a Netflix for games if you can't justify buying a decent gaming PC. But you better hope their servers are online, they give you admin rights on the VM, and that your internet connection is fast enough so they don't have to send you a compressed laggy stream. I guess it would take about 5 years of use to equal a $600 computer, but you give up way too much compared to a physical computer.

I don't think visual quality is a concern, but input lag certainly is.

I ran out of space, but after searching LiquidSky forum, the people who can use it say the servers are still using Nvidia GRID M60's, not Vega. Also, nobody can access the higher level hardware configurations due to an "authentication bug" even though they are paying the $10 a month. I can't find the thread, but somebody compared their LiquidSky firestrike benchmark to a 1060 paired with an athlon, it actually had a lower score than my pc.

Hmm, seems to be a number of issues then. I guess this is what a beta test is for, but I think charging for it is a bit of a scam.

So, how about the game? and do we need to buy 1 per game title to too?