The pressure has been mounting for Arkane Austin this week. Bethesda studios' talent for putting their foot in it knows no bounds, and in recent weeks Arkane has assured us of fantastic PC performance for Prey, as well as controversially saying Steam refunds can just take the place of a demo. It's all poised perfectly for Arkane to take a fall, but have they proven the doubters wrong? Is Prey 2017 well optimized on PC? Let's find out.

First of all, let's take a look at the graphics options available in Prey. Aside from the usual resolution and V-sync options, there aren't actually a huge number of options should you want to tweak your performance. Just seven in fact, which is usually enough to set alarm bells ringing on a PC version. We'll hold fire for now though and see just how Prey performs in benchmarks.

For our benchmarks, we put Prey to the sword with MSI's GeForce GTX 1060 Gaming X 6G, equipped with 6GB video memory. It’s backed up by 16GB DDR4 memory and an Intel Core i7-5820K CPU. For the test, we took an average frame rate while running through a fairly high intensity action sequence about 25 minutes in. We then reloaded and repeated the test multiple times, as well as at varying graphics presets (Low, Medium, High, Very High) and resolutions (1080p, 1440p, 4K). 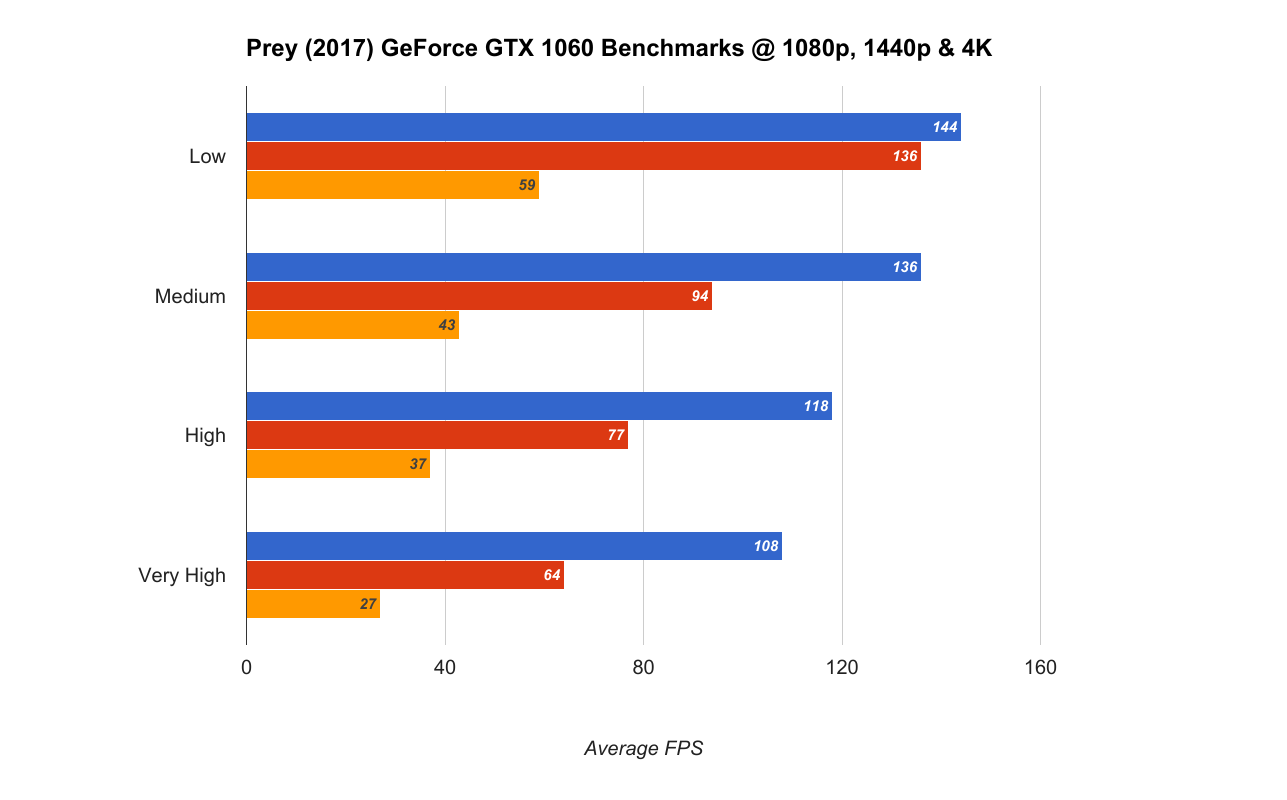 OK, so it's worth bearing in mind that Prey has been built in CryEngine, a totally different engine to the Void engine used for Dishonored 2. It's also been developed by a totally different studio, Arkane Austin vs Arkane Lyon. However, Dishonored 2's poor PC performance at launch was always going to result in the two games being linked, heaping the pressure on Arkane Austin to deliver a PC version with solid performance.

The good news is that they have. Prey runs great, aside from a few glitches and the occasional technical hiccups. Frame rates are decent, frame pacing is even, and all in all there are no major stumbling blocks. We were worried when Arkane opted to skip a PC demo (controversially, in favour of Steam refunds), however, our worst fears haven't been realised.

The GeForce GTX 1060 6GB is an excellent 1080p performer and a good 1440p graphics card, and these are reflected in the Prey benchmark results. Both resolutions stay consistently above 60 FPS, no matter what you throw at them. Performance of both Prey and the MSI GTX 1060 does no disappoint.

Try to run it on a 4K monitor and you're moving a little outside of comfortable territory for the GTX 1060. This is where it begins to struggle, however, the frame rates are still triple Dishonored 2 running at the same resolution. If you're willing to sacrifice some graphical details (be warned, Low has some major drawbacks) then you can get a playable 4K frame rate in Prey.

We'll have plenty more on what these different presets will mean to you, but suffice to say the Low preset has some serious issues with pop-in and level of detail that can prove detrimental to gameplay. Overall Prey has slightly disappointing visuals; a little bit box-y and 2012.

Despite the below par visuals however, Prey 2017 isn't the unoptimised mess we feared it may be, and Arkane has achieved plenty to prove the doubters wrong. Later on we'll be taking a look at the impact of various graphics options, as well as Low vs Ultra and a look at just how Nvidia's latest driver improved performance on day one.

Does anyone know how well it runs on a GTX 970?

Finally, a game that runs good when it's released!

What about amd cards?