Sega has just outlined its roadmap to 2020, revealing plans for a revival of some its older major IPs. The Road to 2020 business presentation reveals a combined strategy of “expanding existing IPs and obtaining new IPs for North American and European PC games”, as well as the “Revival of major IPs.”

The Japanese publisher obviously has a long and storied history, although since the demise of the Dreamcast a number of these have fallen by the wayside. Sonic is the only franchise from the Mega Drive days which continues any sort of love from Sega, yet its roster of franchises includes Altered Beast, After Burner, Alex Kidd, Ecco the Dolphin, Chu Chu Rocket, Crazy Taxi, Golden Axe, Skies of Arcadia, House of the Dead, Metropolis Street Racer, Nights, Out Run, Panzer Dragoon, Phantasy Star and more. There’s plenty there which would be incredible to see given a 2017 makeover and help Sega put its first-party output back on the map. 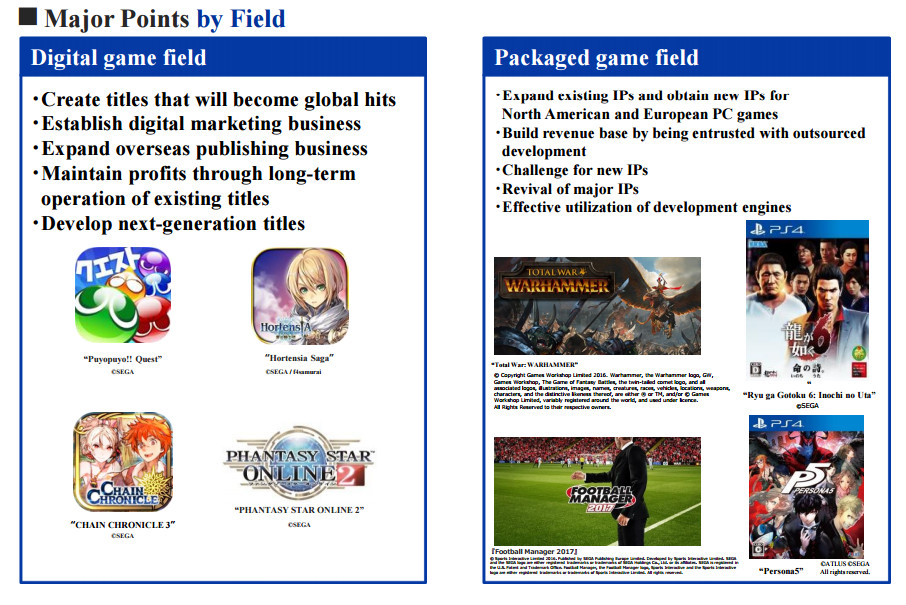 On a personal level, I would absolutely adore it if Toy Commanders was brought back from the dead. This really was an underrated gem on the Dreamcast, packed with dozens of controllable toys and vehicles and unique tasks taking place in household areas. For example, you use a toy car to cook breakfast, shunting eggs from the shelf and into a frying pan, or using a fighter jet armed with pencil missiles to take down a platoon of green soldiers.

Elsewhere, Sega laid out plans to “create titles that will become global hits”, which is obviously a lot easier said than done. Part of this to pursue the games-as-service route, keeping titles active long-term rather than a once and done sales. Think Overwatch, Destiny, Rainbow Six: Siege, etc.

The last year has been pretty decent for Sega financially as well, profiting big time off its successes with both Persona 5 and its in-roads into PC gaming. Persona 5 and Total War: Warhammer have sold a combined total of 10.28 million units, while Sega estimates total unit sales of 11.6 million for the strategy trio of Warhammer 40: Dawn of War 3, Endless Space 2 and Total War: Warhammer 2.

Sega's steady break into PC gaming has been very encouraging to see, and they're now one of the biggest Japanese publishers in the PC sphere. Between Dawn of War, Endless, Company of Heroes and Total War, they effectively own a huge chunk of the strategy market.

With classic franchise revivals on the cards, which series from Sega's back catalogue would you like to see reinvented in 2017?

Expand existing IP and new IP for PC!! I really looking forward to that!!

A new Streets of Rage please, with a 4 player mode.

A new Shining Force would be amazing.

I want to thank you for this article, because of you I now know the name of my childhood long lost video game. Toy Commanders. I was too young at the time to know how to read lol, but I recall watching my older cousins play it and I loved every moment! I remember it being out of this world for me. I too hope they bring that back!

Also, Phantasy Star is an awesome game, they should really bring that back!

I loved Toy Commanders! Nothing else has been made quite like it... :(

I need me some phantasy star online 2

Revive Jet Set Radio Future. Please Sega, I'm begging you. And hopefully the outline they have for existing IPs will bring Persona to PC.

That's a great shout on Jet Set. And why Persona isn't on PC I'll never know, same with the Yakuza series.