The wizards at id Software have been on a bit of a roll lately. Last year they brought DOOM back from the dead in style, and in 2017 it's the turn of the arena shooter king - Quake. The Quake Champions Beta is available to download and play now, offering up hyper-kinetic FPS action with plenty of giblety chunks. Interestingly, it doesn't run on the same idTech 6 game engine which powers DOOM. Instead id Software has opted to use a hybrid engine composed of id Tech and Saber Tech (Halo Online, TimeShift, NBA Playgrounds). This means no native Vulkan or VR support. Was it the right move? Let's find out.

For our benchmarks, we pitted Quake Champions in a duel with MSI's GeForce GTX 1060 Gaming X 6G, equipped with 6GB video memory. It’s backed up by 16GB DDR4 memory and an Intel Core i7-5820K CPU. For the test, replicating scenarios proved difficult. We there took an average frame rate obtained through a five-minute sequence of gameplay. This was done at several different graphics presets (Low, Medium, High, Very High) and resolutions (1080p, 1440p, 4K). 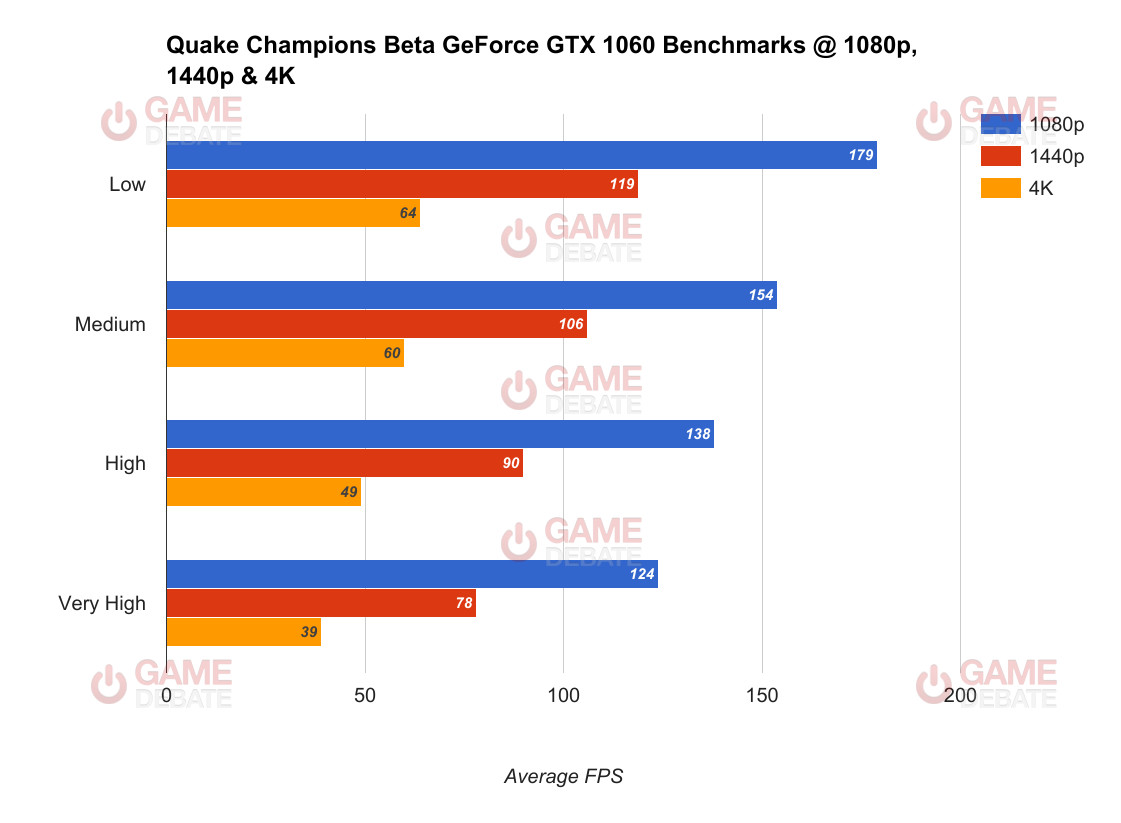 Id Software have proven themselves the performance masters time and time and time again, and so it proves with Quake Champions. This really is the everyman's shooter. it's going to run at decent frame rates even on low-end graphics cards (a GeForce GTX 650 should be more than capable) and it still looks very decent even at a Low graphics preset. What I found particularly impressive was there was very little

What I found particularly impressive was there was very little fluctuation in frame rate. Frame times felt even, there was no stuttering, and it delivered a great gameplay experience, even at 4K / Ultra with an average FPS of 39. Id Software has made a pretty big deal of Quake Champions' 144Hz capabilities, so you've got a 144Hz GSync or FreeSync monitor you should be able to get some ultra-slick frame rates with even a mid-range GPU.

What's particularly impressive is that id Software has gone and achieved this in a completely different engine to last year's DOOM. Average frame rates at 1080p are actually higher in Quake Champions, despite the lack of Vulkan. The jury's still out on whether Quake Champions will actually be worth your time and/or hard-earned cash, but even in this beta state there's no doubt it's an incredibly optimised game.

Okay, these are insane benchmarks at 4k for a 1060. Not that my monitor goes above 60 hertz, but a hundred fps on a 1080 at 4k seems possible. This looks gooood.

Those results are really good!
Oh, and what's with the Unreal Tournament 3 thumbnail?

I remember it well, playing Quake 3 Arena and then the massive upgrade that was Quake Live. I will gladly pwn n00bs once again.