E3 2017 was the undisputed year of sequels. Familiar IPs as far as the eye could see. By and large, they looked absolutely fantastic, but our E3 2017 game of the show brought a little extra to the party. An all new game from an all new studio, this was the title that stole the show for us at E3 2017. 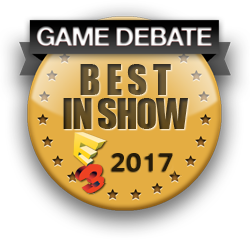 A Way Out is quite an unusual one to scoop our Best in Show Award at E3 2017 this year. We’re used to AAA behemoths and blockbuster shooters gaining all the limelight, but this year we were ultimately most impressed by Hazelight Studios’ A Way Out.

Obviously this is a game with big publisher backing in EA, but A Way Out is an indie game at heart. The second game to be directed by Josef Fares after the sublime Brothers: A Tale of Two Sons, A Way Out is a wholly unique experience that is playable exclusively in split-screen mode, whether online or offline.

According to Fares, this is absolutely vital in order to be able to solve the puzzles or work through gameplay sequences. In essence, you need to be able to screen stare at what your buddy is doing in order to bust your way out of prison. Both players will be playing simultaneously at all times - even while one watches a cut-scene, the other will be able to control their character in the background and affect the unfolding events.

One of the biggest focus points with A Way Out is that players will never be asked to do the same thing twice. Each location, each puzzle, will demand some new form of cooperation between the escapees, such as distracting a guard while the other pickpockets its keys, or one driving a getaway car while the other interrogates a hostage in the back.

A few people are up in arms that A Way Out must be played in co-op at all times, but it’s a necessity for the game to even work. Not all games are made for everyone, and it’s a rare treat for gamers to get a dedicated co-op game like this.

There’s a lot we still don’t know about A Way Out, but if this is the future for games sitting below the usual AAA tier, then we definitely want a part of it.

It probably won't come to steam along side with Anthem but is there any hope or confirmation?
Me and my brother are really interested in these two games especially A way out cos we loved Brothers A tale of two sons

I would guess it's Origin only.