Semiconductor manufacturer Micron has been forced to temporarily close one of its two Taiwanese manufacturing plants due to a malfunctioning nitrogen gas dispensing system. The fault has contaminated both the wafers and the manufacturing equipment itself, forcing its Inotera Fab-2 plant to shut down.

Inotera Fab 2 is responsible for approximately 5.5% of the global production of DRAM, equivalent to approximately 60,000 wafers every month. Those keeping an eye on memory prices will be painfully aware they’ve been creeping upwards over the past year due to incredible demand from the mobile industry. This closure will put an even bigger strain on DRAM production, and will likely result in further price rises for those looking to buy system memory.

While the DRAM manufactured at the Inotera plant is used in a wide variety of devices, the fabrication plant is “mainly responsible for manufacturing Micron’s LPDDR4 products that go into Apple’s supply chain for iPhone". This could lead to a delay in launching the upcoming iPhone 8 or, perhaps more likely, Apple may be forced to hijack alternate production plants in order to hit its targets.

As for when Inotera Fab-2 will be up and running again, Micron says "the restoration of production capacity will be a time-consuming challenge". Fortunately, Micron has said it has a large network of manufacturing plants and any incidents at one can be alleviated by the other plants. With any luck, it shouldn’t be long until production is back in full swing.

However, in the short term at least, expect a price bump in the cost of RAM. TrendForce indicates this is already coming into play with DRAM Contract Prices. 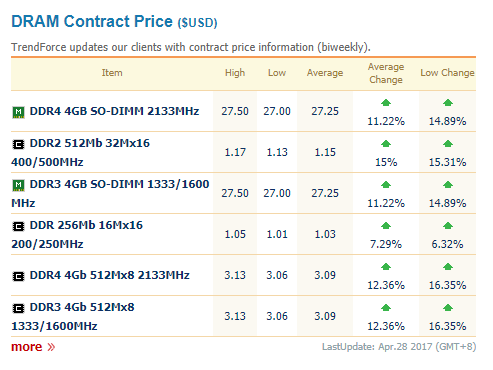 LPDDR4 is not used in computers, so if they rise prices, they're c?nts :P

Lucky I advised my sister to get 32GB of RAM just in time. Since she purchased her kit (4 months ago) the price has risen by 15%, outrageous. Can't bode well for future GPUs either, with the mining craze still ongoing the midrange GPU prices in Australia has doubled. An RX 580 4GB costs as much as the cheapest 1080, double outrage!

Anyone else thinks these periodic "issues" with DRAM factories are perfectly timed to rise the price continuously? Just saying...

Only if things weren't bad enough already. May the force be with us! :D

As if RAM prices were NOT high enough due to the mobile and laptop market... :/

nitrogen gas so toxic and dangerous it's only 78.1% of the atmosphere :P
definitely gonna take a looong time for the manufacturing plants to start working again! lol

inhaling too much nitrogen without a proportionate amount of atmospheric gases like oxygen could cause asphyxation which can be VERY fatal. furthermore, nitrogen can displace oxygen in closed spaces which increases the risk.

Time for AMD, Nvidia, and Intel to just start designing their own ram then

as if they hadn't got expensive enough yet..

After video cards for mining here goes the ram with high prices, not so good time for building a new PC.

probably worst time since cryptocurrency mining with r9 290 3 years ago..