Ever since its launch, For Honor’s peer-to-peer (P2P) networking has been the proverbial pain in the arse. Any time a player rage quits a session, the action is paused while the P2P connections are reconfigured. Not ideal in a timing-based fighting game. At long last Ubisoft has decided to nip this problem in the bug though, with dedicated servers coming to For Honor shortly.

The dedicated server infrastructure should provide greater connection stability with fewer drop-outs. That’s an absolute must if Ubisoft wants For Honor to be taken seriously as a competitive game.

In addition to the dedicated servers, Ubisoft also outlined a roadmap for the coming months. Two new seasons of content are set to arrive for For Honor, each containing two new heroes and two new maps.

For Honor Season 4 kicks off in November, adding a new 4v4 PvP game mode with Ranked, a new Training Arena mode, new tutorial, weapons and armour variations, and all the usual balancing updates. It’s a hefty slate of content  that matches the Rainbow Six Siege approach, providing players with plenty of invitations to keep plugging away at For Honor. 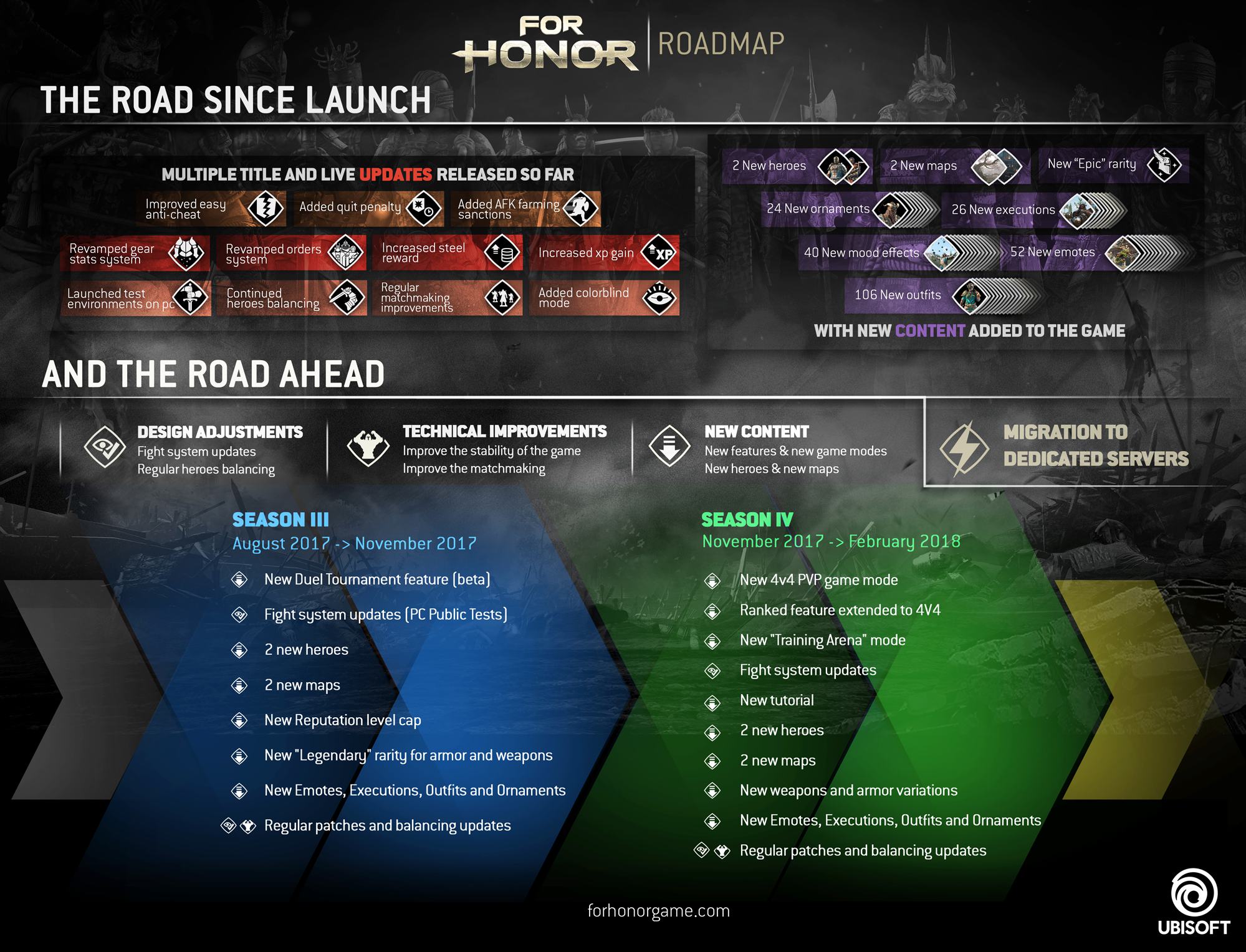 “Since launch, our team has worked diligently to identify and correct issues that were not apparent with our testing and live phases,” said Roman Campos-Oriola, creative director of For Honor. “The For Honor roadmap is how we plan to build a stronger game through elements like dedicated servers. We are committed to our players and look to offer long-term support for the game.”

I haven’t actually played For Honor a great deal since launch, but I’m admittedly tempted to give it another shot with all these changes going in. For those playing regularly, how does it hold up after six months? Can you see For Honor having the same long legs as Siege? Let us know!

It took them too long. I was waiting to buy until these server issues got fixed but that didn't happen so I just gave up on it. Seems I'm not the only one.

Too little, too late. Battleborn 2.0.

I mean this is great news for those who still play this game, the game has lost a lot of its player base since launch, it peaks at around 1500-2000 players within 24hours Source , I mean props for Ubisoft for not just completely abandoning it, and best of luck to them to try and regain the lost player base, the game is definitely interesting, but I feel like they have waited too long for a push like this.

They need that microtransaction money :D

That will be nice, if the game survives that long.