With the G433 headset, Logitech bravely set out to solve that age-old conundrum: How to create headphones for a PC gamer who might occasionally want to do something other than play PC games?

This has never really been a problem for me, of course, as I never really want to do anything other than play PC games. But I can imagine the type of person who does. Maybe they might listen to music on their mobile phones, perhaps. Or even play console games. Or DJ hugely successful house parties for their millions of adoring friends and admirers. Yes, I can certainly imagine such a person, and how it might be a little awkward if they'd spent all their money on big, clunky PC headphones with huge plasticy boom mikes that make them look like air traffic controllers while they're listening to music on the bus.

Not to mention the connectors! USB is, of course, a high point in human endeavour, providing a single connector that just about everything on your PC uses. But headphones that only have a USB jack are little use if you want to line the things into a DJ controller or a phone. Or even certain consoles, for that matter. Yes, in the world of audio outside of the PC, the old classic 3.5 jack is where it's at.

The G433 wants to be all things to all people. In a range of colours ranging from classic black to eye-gougingly painful red, I was rather pleased that the ones I had to test were a blue that seems designed to go well with jeans. The PC-connecting cable is braided for strength and has a built-in media control, and there are a couple of other connectors in the box (with the 3.5 jack!) so you can run it into anything else that makes noise. There are two different pairs of earphone cover - one pair is microfibre and the others are 'sports mesh', which I suppose makes you feel sporty while you're sat at the computer. I certainly did! There is a carrying case included as standard as well, because the intention is that you can take them and go live your life. 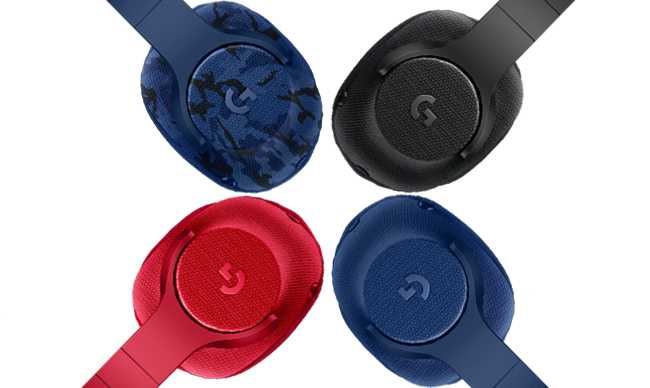 I love how Logitech's earcups just sort of swivel to plop naturally speaker-down when you cast them carelessly onto a table. This is a feature I really liked in the G430 and I still love now. In fact, there is much about the G430 that you'll find similar about the G433. The over-ear cups are a little tighter than the G430s out of the box, but with time they can be trained to relax a little. The 40mm drivers put out the same kind of sound quality as the G430 but with marginally more volume at the top end. I can say with certainty that the 7.1 binaural sound system makes the voices in your head while playing Hellblade: Senua's Sacrifice 28.6% more alarming and 14.7% more ominous compared to traditional stereo speakers. The combination of the USB DAC and the Logitech G software lends itself to some pretty convincing surround sound on PC - although obviously less so on console or mobile gaming. Bass is huge and shaky, which works well for 'splosions and the like, while higher end sound is ably handled on PC as well, though fractionally less convincingly once the 7.1 is swapped out for stereo for other formats.

Heres some Logitech Headset G433 datalumps for you to crunch

What you get in the Logitech G433 box

The sound quality is good, great even for the price point, but the real selling point for the G433 is the versatility provided by the accessories and design. The boom mic is removable in case you'd rather look like a music lover than a helicopter pilot, and the choice of cables for PC or console/music system allows for simplistic hot-swappability (which is too a real word). Sound quality dips a little when you're using the regular 3.5 connector though, although these finer points could well be lost on casual users as the sound quality is by and large very good.

On PC, the EQ is mostly handled through the Logitech G software, which has been through enough iterations now that they've got it pretty well sewn up now. The 100-dollar / 110-pound price point makes it one of those sweet and rare tech items that is cheaper in the UK than the US at time of writing, and while it's not exactly cheap, it is still a pretty good deal for gamers - a brilliant deal for gamers looking to buy PC gaming headphones and audio headphones at the same time.

If you have 100 dollars and want a good gaming headset, this may not be the unit you necessarily settle on as there are some fine options at the same or cheaper price point, and the same could be said with picking up some mid-range audio headphones. But if you're looking to combine these purchases in one versatile unit that can hold its own in both arenas, the G433 is in a class of its own. And for that it earns our Recommended Hardware Award. 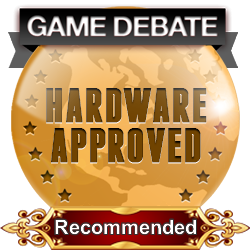 hmmmm........
My speaker, Logitech. K/B & touchpad, Logitech. Contoller, Logitech. but headset? non Logitech.
Should I go for a Logitech headset? will be on spotify most of the time.

I love my Logitech G430 and this G433 is basically the same thing. Great sound quality, and comfortable.

This is basically a refresh of the G430 that I have right now. However this G433 does have a few extra features like the detachable microphone boom. That is nice. As an owner of a G430 I can speak up for the quality of Logitech's use of 7.1 surround sound in these headsets. They are very good and super immersive with excellent thumpy bass levels. The Logitech G software has an excellent control scheme for the 7.1 surround and a great user friendly EQ.

Kudos to the work, that you put into the review Thomas.

"The 100-dollar / 110-pound price point makes it one of those sweet and rare tech items that is cheaper in the UK than the US..."
I really don't get this, is 110 pound less somehow than 100 USD? Or they selling with swapped currency?

Depends on where you live, not just by country. Say in town 1, 100$ might go a lot longer than in town 2. So it doesn't only depend in which country you are, but in which part of the country you live.