DOTA 2 Player Base Shrinks to Lowest Since 2014, PUBG Continues to Grow

Always seemingly impervious to change, the DOTA 2 player base is finally showing its first signs of dwindling. This week DOTA 2 hit its lowest number of active players since 2014, dropping as low as 214,155. Still, a hugely impressive figure, no doubt, and DOTA 2 remains the second most popular game on Steam behind PlayerUnknown’s Battlegrounds.

It’s the impact of PUBG that is probably having the largest effect on DOTA 2’s active player base, its meteoric rise has to be caused by a displacement from other games. Over five of the last seven months, since PUBG launched, the average DOTA 2 player count has dipped, taking its deepest tumble yet on Tuesday evening to just north of 214K.

The numbers tell their own tale, but it’s hard to ascertain whether this is a larger problem for DOTA 2’s waning popularity, or whether this is just a minor blip as players try out the next big thing.

DOTA 2 really peaked in March 2016, amassing its highest ever concurrent player counter of 1.29 million, averaging 672,000 players online at any point. Since then it’s been a gradual decline, although it’s still firmly one of the most popular games in the world right now, particularly from an eSports perspective - the DOTA 2 Invitational continues to grow in both spectacle and prize funds, year in, year out. 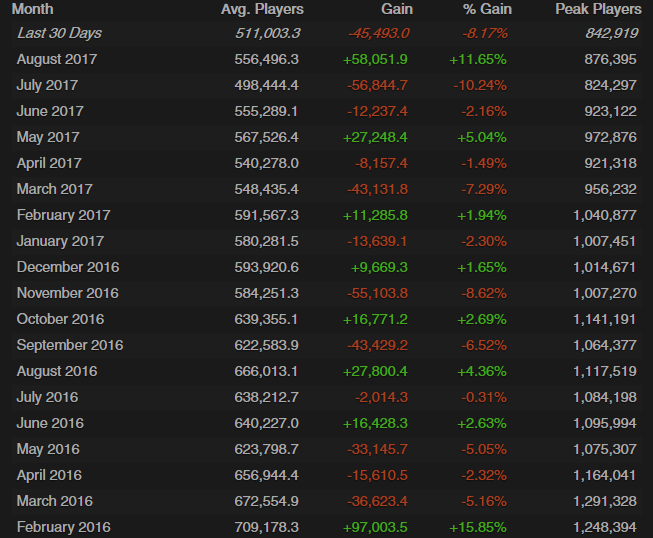 What are your thoughts on the recent dip in DOTA 2’s popularity? Do you think gamers are growing bored with the MOBA, or is this just a temporary decline caused by PUBG’s incredible success? Let us know your thoughts!

If a new patch comes out, people will flock back to play DoTA2 for some time again.

Big deal, PUBG is a game that people will get sick of, no matter how much innovation it brings; DOTA is considered a sport - no matter how sick people get of it, they will always return for some quick matches

The average game of Dota lasts 40 minutes and requires you to cooperate with some of the rudest and most mean-spirited people in the world. Except for the fact that it's free, the game has nothing to offer to the casual player.

What you have to also consider is that PUBG is not a free game like Dota 2, yet it is still smashing the charts. If it was free, people would be like Dota who

Every game has its time... its normal :)

Not dota. Dota is the most timeless game I have ever played. I rarely do so in recent years but thats because I dont have the time and energy anymore. I only play on long periods of relaxation but those keep getting more and more rare as I grow older xD

You are right. Thats why they were at top for a looong time. They had the right formula for sure but.... still :) Dota is really to start and understand for a new player so if you keep losing player even though its slooooowly but getting more new people much more slowly, this happens.

I see what you mean. Yeah maybe with the abundance of games flowing around these days less and less people have the patience to give dota the time it needs to get into it and they just move on to the next. Who knows. I will keep an eye on those numbers though for the time that PUBG starts to slow down ;)

Is it wrong to hate every multiplayer game that becomes popular..? They are everywhere and I'm sick of looking at them... :/

If a new patch comes out, people will flock back to play DoTA2 for some time again.

yea. Lets have this graph after the new patch releases

Big deal, PUBG is a game that people will get sick of, no matter how much innovation it brings; DOTA is considered a sport - no matter how sick people get of it, they will always return for some quick matches

there are a lot of competitive games nowadays that it is harder for dota 2 to cone out on top again. When valve release artifact i think 1/3 of player base will switch to artifact or so. Still this is the most competitve game ever made. And still PUBG is new game. Lets see the graph after 7 years again

i don't really think so it's not even the same type of games it wouldn't be wise to think that this many players would left Dota 2 for a card game!

People also had doubts about heartstone.

Or maybe Half Life 3 lol

If they did that, every game will try to copy Half Life 3 XD

Yeah I was talking about Valve's next game. which is a dota card game lol. HL3 will never get released even the writer leaked the story online.