The early impressions are that TW:W2 is fantastic (unsurprisingly). Before you delve in though, we've got a complete performance breakdown for Total War: Warhammer 2, including GTX 1070 and Radeon R7 370 benchmarks, system requirements, a look at the graphics settings, and how well optimised is Total Warhammer 2? 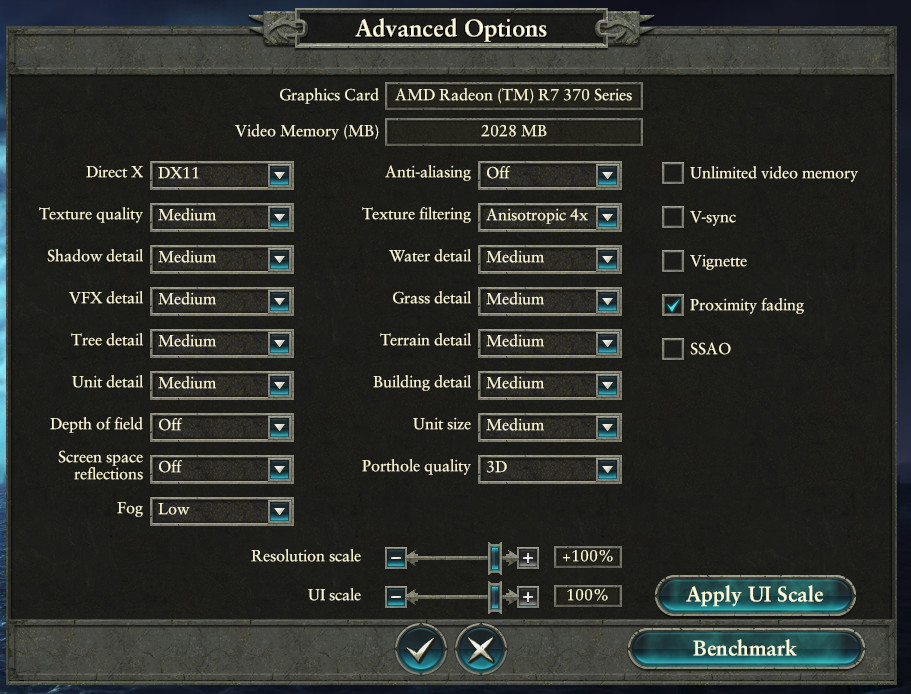 You probably don't need it spelling out for you, but lowering Total War: Warhammer II's graphics settings results in a huge decrease in graphical quality. The difference is night and day, affecting everything from the NPC count to animations, texture quality, shadows and more. On Ultra, Total Warhammer 2's battles look epic, featuring hundreds, possibly thousands of units onscreen at any one time. Dial the settings to Low and it takes a drastic hit, reducing the size of the battles down to dozens of units. This doesn't affect TW2's gameplay though, the smaller troop sizes still take the same amount of time to battle one another.

These minimum Warhammer 2 requirements will deliver 25-35 frames per second on low graphics settings when in a 20 unit versus 20 unit battle or on the campaign map. This will be on a 1280x720 screen resolution.

These recommended Warhammer 2 requirements will deliver 45-55 FPS on high graphics settings when in a 20 unit versus 20 unit battle or on the games campaign map. This will be on a 1920x1080 screen resolution.

These ultra Warhammer 2 requirements will deliver 60 FPS on ultra graphics settings when in a 20 unit versus 20 unit battle or on the games campaign map. This will be on a 1920x1080 screen resolution.

All of the races from Total War: Warhammer and its DLC are only playable in TW:W2 if you bought the previous game and the appropriate DLC. This includes the Vampire Counts, Greenskins, Empire and the Dwarfs.

Total War: Warhammer II comes with its own benchmarking tool. Found in the video settings, TW2's benchmarking utility features two separate tests - one for a large battle sequence, the other stress-testing performance on the campaign map. We ran through these benchmarks on Total War: Warhammer 2's Ultra graphics preset, taking the average frame rate at both 1080p and 1440p resolutions.

For this Total Warhammer 2 benchmark, we used a GeForce GTX 1070 equipped with 8GB video memory. It’s backed up by 16GB DDR4 memory and an Intel Core i7-5820K CPU. 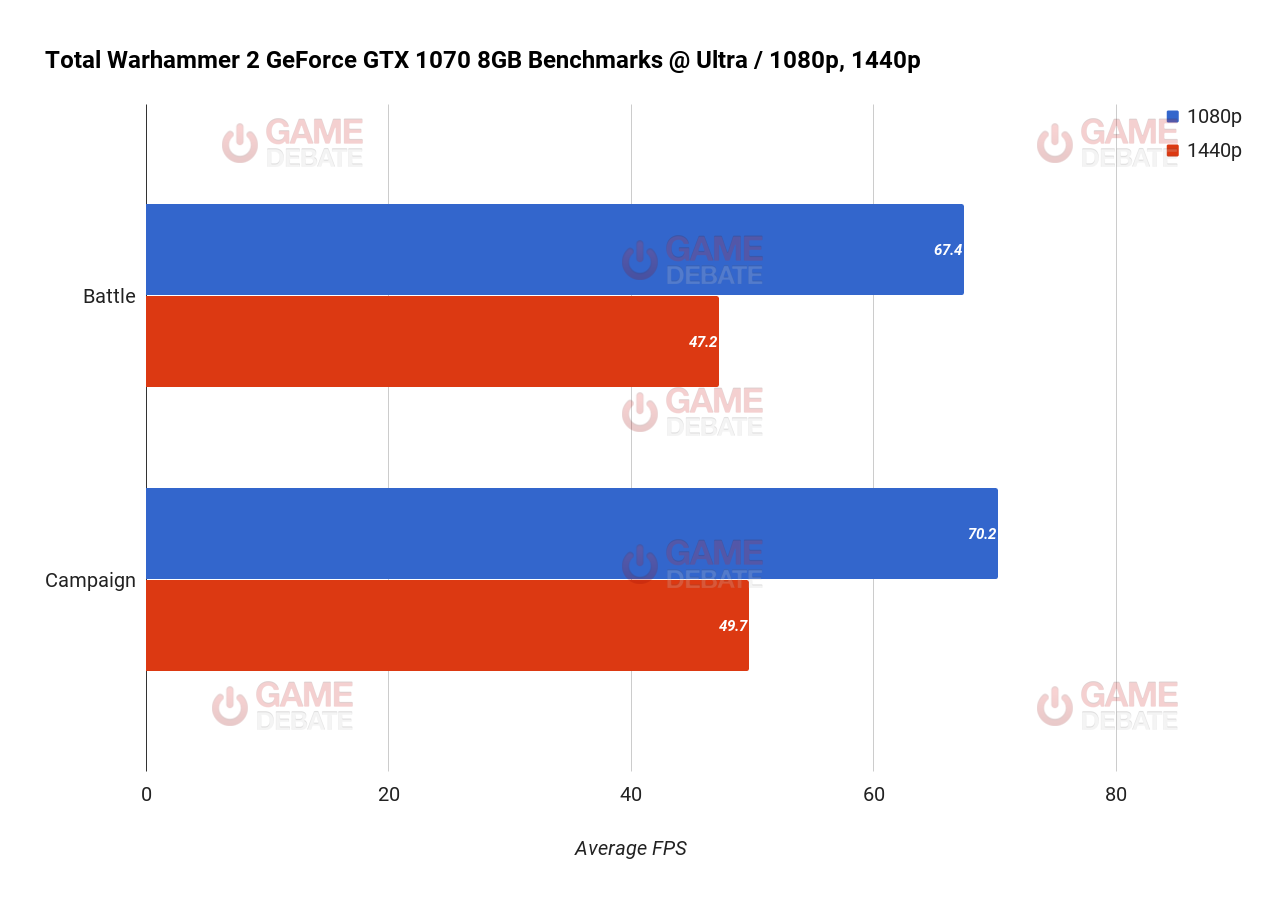 It's very hard to pull a like-for-like comparison out of the two Total Warhammer titles, but the results here are actually considerably lower than what we'd expect from the original. Whether the benchmarks are just tougher or Creative Assembly has done some sneaky visual upgrades, we can't say with any certainty. Suffice to say though, in Total War: Warhammer a GeForce GTX 1060 Founders Edition could pull in 66fps at 1080p / Ultra, pretty much on par with this GeForce GTX 1070 in TW2.

In the end, the GeForce GTX 1070 can actually begin to struggle at 1440p, a resolution at which it's designed to excel. Of course, this is at the Ultra preset, but what's a £400 graphics card for if you're not going to crank everything up? Fortunately, the battle sequences provide the most stable frame rate in Total War: Warhammer 2, despite a lower average FPS overall. This at least means that Total Warhammer 2 remains very playable on the GeForce GT 1070 at 1440p.

In TW2's Campaign benchmark the frame rate lurches all over the place, hitting a low of 40 and a high of 65. This is far from ideal, yet it doesn't truly represent Total Warhammer 2's campaign map gameplay. The camera is swirling around everywhere, while in a normal gameplay session you'd be looking top-down, taking turns. 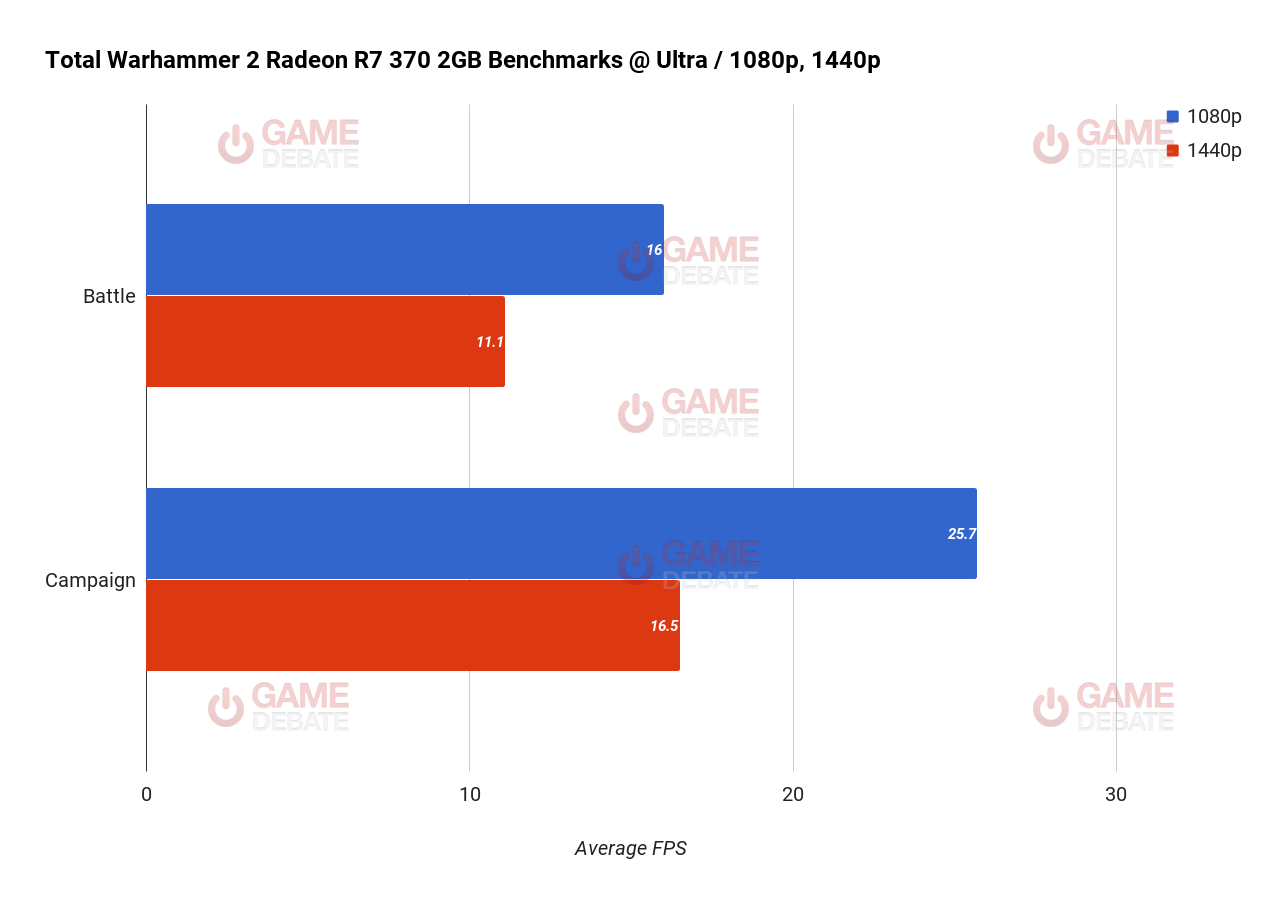 The Radeon R7 370 2GB runs into real trouble here, and it's definitely not worth attempting the Ultra preset in Total Warhammer 2 with this graphics card. A nice balance can be struck when played at 1080p / Medium though. At this preset, CA's strategy title can still look fantastic (although troop sizes are smaller), and you're rewarded with a much more playable game that can tip into the 50s and 60s in terms of frames per second. 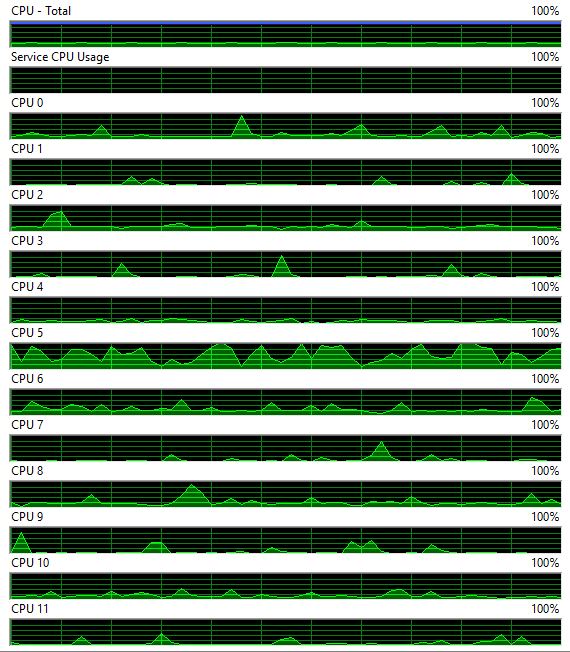 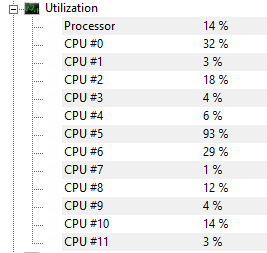 Predictably enough, despite Total War: Warhammer 2 being a CPU-heavy title, the Intel Core i7-5820K is severely bottlenecked by the Radeon R7 370. It barely gets a chance to stretch its legs, and only a single thread is really put under any serious pressure. In order to try and get a better readout of CPU optimisation in Total Warhammer 2, I then opted to dial it down to 720p / Low in order to attempt to shift the heavy lifting off the GPU and onto the CPU. 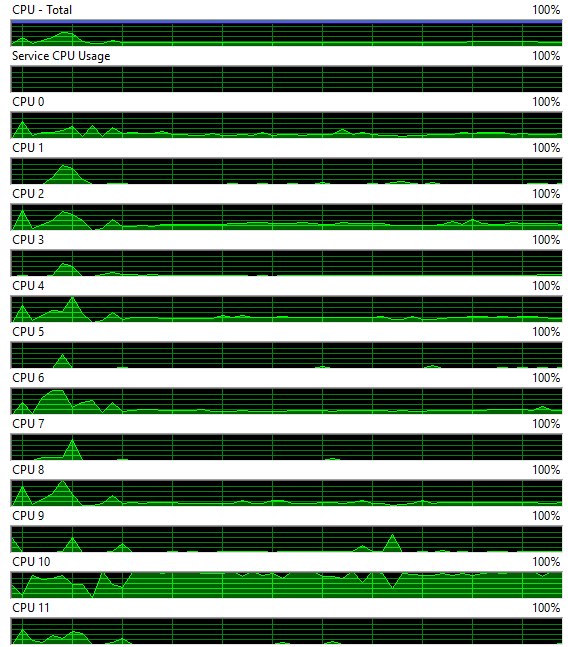 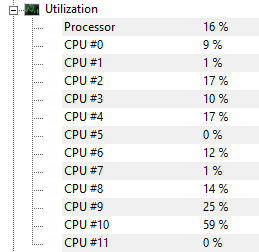 Mission failed. When playing Total War: Warhammer 2 at 720p screen resolution, the frame rate drifted up into the 80s with the Radeon R7 370, although as you can see in the GPU usage below, it was still the bottleneck. From the looks of things Total War: Warhammer II is well equipped to shift the load over onto multiple cores though, and despite CPU #10 hitting 100% load often, this didn't result in any performance drops or hitching.

For one final test, we put the GeForce GTX 1070 back in and set Total War: Warhammer 2 to Low graphics preset and 720p resolution. This makes for an easier workload for the GPU, pushing out more frames from the graphics card and giving the CPU more to do.

Ultimately the GeForce GTX 1070 still proved the bottleneck, but you can see above that Total War: Warhammer II scales well on multiple cores and threads. Half of the threads are at a fairly high load, while the other half are being used yet at nowhere near full capacity. The caveat is that the Intel Core i7-5820K is a very capable CPU, so processors with fewer cores are more likely to run into a bottleneck, but it looks like a solid quad-core shouldn't hinder GPU performance in TW2 too much.

Suffice to say, initial impressions point towards Total War: Warhammer II being extremely well optimised. As it should, really - Creative Assembly has spent years perfecting this engine, and while there's much more complexity on offer due to the fantastical units, the core of the Total War series remains the same.

While we also begin to put together our review, it's worth checking Felix's thoughts on the original Total War: Warhammer in his review.

No matter the fps i will play on ultra. I will have more army on ultra than on low. Quality>Quantity

Just put all settings except unitsize on low?

Hey guys, I'm pretty sure that was just a joke... dont be so harsh :p