More than one million players have downloaded and played Fortnite’s free Battle Royale mode during its first 24 hours of availability. A textbook example of the Streisand effect in full swing, Fortnite: Battle Royale immediately achieved notoriety (and a whole bunch of attention) when PUBG creator Bluehole issued a statement condemning the similarity to its own battle royale title.

“Over 1 million players have partied on the Battle Bus during the first day of Battle Royale! Thank you and party on!” said Fortnite creator Epic Games in a tweet. 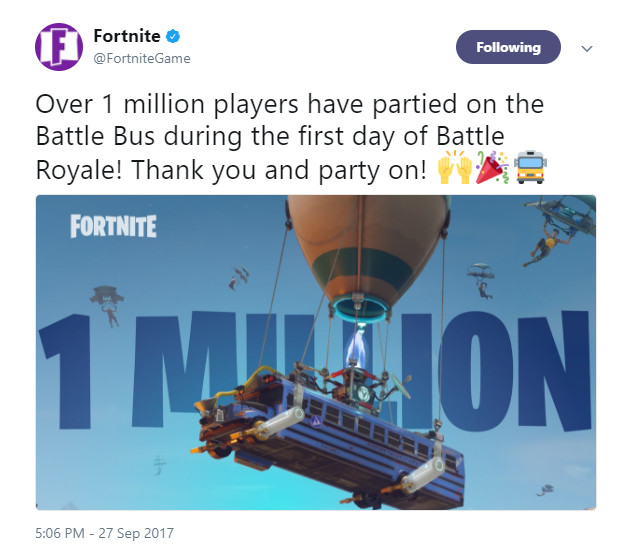 It’s a bit of an assumption, but I can’t help but feel that most folks couldn’t care less when Fortnite’s Battle Royale was announced, ahem, a fortnight ago. Fast forward to Bluehole’s inflammatory statements, admitting they are  “concerned that Fortnite may be replicating the experience for which PUBG is known” and are contemplating “further action,” and all of sudden Fortnite Battle Royale is a bigger hot topic than Epic could’ve dreamed of. Bluehole has played the role of the screeching tabloids complaining about GTA's violence to a tee, achieving nothing but enhancing the appeal of Fortnite.

It’s understandable Bluehole would be worried about Fortnite but they haven’t gone about it in the best way. For console players who can’t get Battlegrounds, this obviously holds a larger appeal, particularly PS4 players who haven’t even been informed whether a port is ever coming or not. If Fortnite does take off then it could prove to make a huge dent in PUBG’s console sales, although PUBG’s PC success is already assured.

Like PUBG, Fortnite is a 100-player free-for-all set on a gigantic island map. You can play solo or in squads of four, dropping out from the party bus at a time of your choosing and skydiving down to the ground. I had a few sessions last night and it is indeed very similar, complete with an encroaching danger zone funnelling players together towards a climactic finale.

The initial minutes are the same frantic scramble to find weapons and establish a base of operations. The only major differences are the lack of vehicles in Fortnite, kind of negated by the implementation of a rudimentary building system. You can plunk up walls to build a defensive fort, lay down spike traps etc. It seemed pretty decent for a freebie, although it feels a little light on content for now. The shooting, too, is a bit spongy for my tastes, not offering satisfying feedback for a hit. Aside from this, it’s a pretty decent impersonation of PUBG, albeit for free.

Has anyone given Fortnite a shot? Have Bluehole's complaints boosted the popularity of a competitor? Let us know your thoughts!

funny. coz the engine they're using is epic games' as well...really bluehole? lol

Plenty of people won't like the less serious nature of the game or the graphics, but its got some big positives. It runs well (way better than PUBG), its free, and its got building. The building aspect alone sets it apart from PUBG, especially since cover falls away after being shot at.Honestly that's all people ever want. The actual gunplay is pretty bad, I can barely kill someone even if I get the drop on them, and there is definitely some quality of life stuff they're gonna have to add to the UI and the game in general, but hey free crafting PUBG.

Played it, hated it and deleted it. Its a bit too cartoony and theres no sights so the aiming needs work. Two open betas that are crap lol, fortnite and COD WWII.

Saying that Fortnite Battle Royale is a PUBG copycat is like saying FPS A is a copy cat of FPS B. In simple words, it doesn't' hold any ground.

And PUBG saying that is like the pot calling the kettle black. King of the Kill anyone?

yes but the key difference is the guy that made PUBG also made King of the Kill, he can't take action on them because he sold it, he also made ARMA 3 BR, and basically every big BR game until FortNite did this.

I agree 100% but then again people easily complain over even lesser things nowdays, people have grown weak

Fotnite looks fun, really fun and of course is a F2P... For me Fortnite/PUBG its like Paladins/Overwatch ... Those who can't buy PUBG/OW will play Paladins/Fortnite.

Nice way to shoot yourself in the foot Bluehole....

It is so fun, playing it right now, I love how you can build a mini base on top of the hill or just place a wall when camper tries to snipe you and stuff like that.