Bethesda and id Software have revealed the post-launch content roadmap for Wolfenstein 2: The New Colossus, totalling four expansion packs between now and March 2018. Each of the different story DLCs lets players step into the shoes of a new hero fighting for the freedom of the US.

The first of these, Episode Zero, is out right now. This is a mini-episode that introduces the three new playable characters - Joseph ‘Gunslinger Joe’ Stallation, Jessica ‘Agent Silent Death’ Valiant and Gerald ‘Captain’ Wilkins. Each character comes with unique abilities and weaponry with which to deliver some brutal Nazi justice. It’s going to have to go some way to match the brutality of the main campaign though.

Following this, The Adventures of Gunslinger Joe launches on December 14th. Joe’s an ex-pro quarterback who’s using his brute strength to resist the Nazi forces in Chicago and beyond. In the new year, MachineGames drops The Diaries of Agent Silent Death on January 30th, telling the story of an ex-OSS agent operating in California. Lastly, there’s The Deeds of Captain Wilkins in March 2018. Captain Gerald Wilkins is heading to the frigid lands of Alaska to take down the Nazi’s Operation Black Sun mission. In total, we’re looking at around nine hours of new content for Wolfenstein 2 during the next four or so months. The Freedom Chronicles Season Pass for The New Colossus will set you back $24.99 (US) / £17.99 (UK) / $34.95 (AUS). 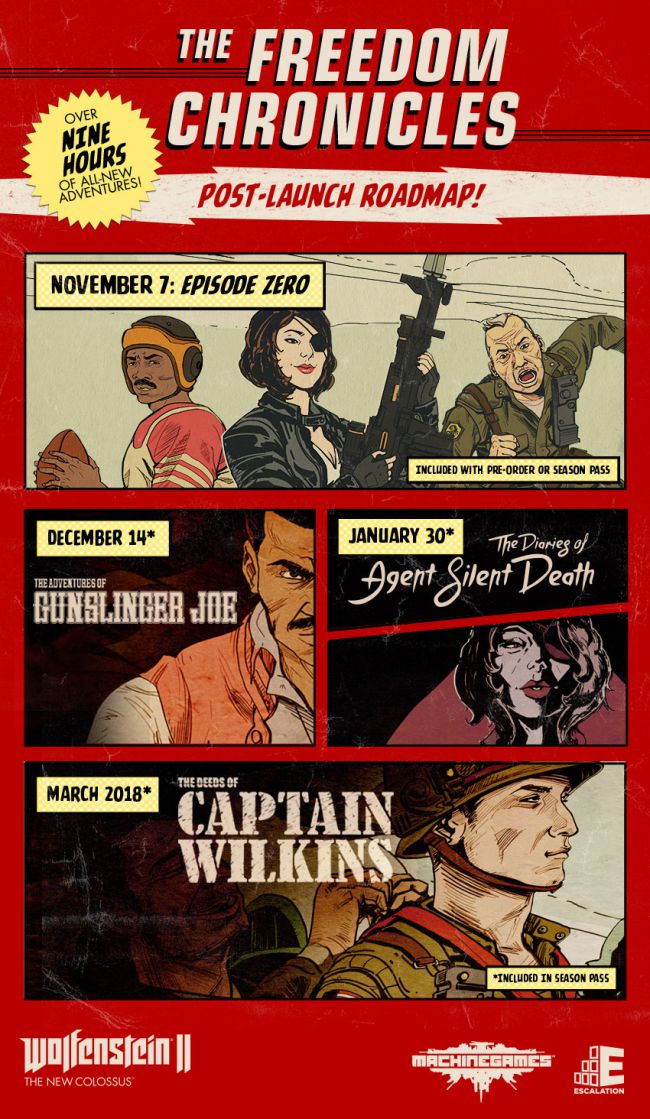 It all sounds pretty neat but I take it I’m not the only one waiting for the complete edition? Bethesda publishes some great games but the rapid price drops and regular complete editions mean waiting usually pays off pretty quickly. Anyway, what are your plans, are you picking up the Wolfenstein 2 season pass? Or did you get your fill from the campaign already? Let us know!

I will wait for the complete edition as well.