All the gory details were revealed regarding Rainbow Six Siege’s imminent White Noise update this weekend, as well as a roadmap for the next year’s worth of content. Operation White Noise is the final season of Siege’s Year Two content, adding three new Operators and the Tower map.

First of all, let’s start with the three new Operators - Dokkaebi, Vigil and Zofia.

Dokkaebi is a South Korean Operator that had already been partially revealed. She’s probably one of the most complex Attackers yet conceived for Rainbow 6 Siege, utilising a hacking device for a myriad of tricksy plays. She can send out phone calls to the entire opposing team, causing their phones to ring and give away their location. Their phones keep ringing until they take a few seconds to get them out and hang up. It’s not the sort of ability that’s useful when used flippantly, but it could prove an interesting diversion when activated right before storming a room.

That’s not Dokkaebi’s only trick though - she can also take a moment to hack the Defender’s static cameras, allowing the entire attacking team to use them. This adds an interesting dilemma for both sides - Attackers are typically trained to take out each camera as they come to them, but now there are tangible benefits to keeping them intact.

Vigil is the other South Korean Operator, and once again he’s very tech-heavy. He’s a Defender with the ability to be invisible to cameras. His skill works quite a bit like Caveira’s with its cooldown and can be activated an unlimited number of times during a round. Once enabled it allows him to move undetected to both drones and static cameras. It should provide Vigil with quite an edge as a roamer, and he serves as the counterpoint to Dokkaebi’s camera hacking ability. I’m not totally sold on how useful Vigal will be in practice though, a well drilled team will be communicating where the enemy players are regardless of camera spots. His strength likely lies in waiting near entry points and activating his ability as a drone comes in and scopes the place out. Timing this well could provide an easy kill as the Attackers bust in.

Lastly, there’s Zofia, a Polish attacking Operator. She’s Ela’s older sister, so she’ll be engaging in a spot of sororicide, which is a bit weird. Her unique ability is the KS79 LIFELINE grenade launcher. It comes with two impact grenades and four proximity concussion grenades that cause the same effect as Ela’s traps. The KS79 has no reload process, allowing Zofia to unleash a barrage of grenades at high speed. From the sounds of things she’s a very high duty and offensive attacking Operator, working in much the same vein as Ash. Her only downside on this front is she’s got a two-speed rating versus Ash’s three-speed.

In a change to the usual structure, Year 3 of Siege will still have four Seasons but will only be adding two new maps (set in Italy and Morocco). Each new Season will introduce two new Operators, however. This provides Ubisoft with a little more time to fine-tune each new map release and ensures they’re up to scratch, and they’ll also be taking one existing map each Season and giving it a makeover with new level design and art direction. I’d assume this is to provide better balance in the objective points, rather than the situation we have in some maps where some locations are an obvious first pick for Defenders, while others you avoid like the plague. 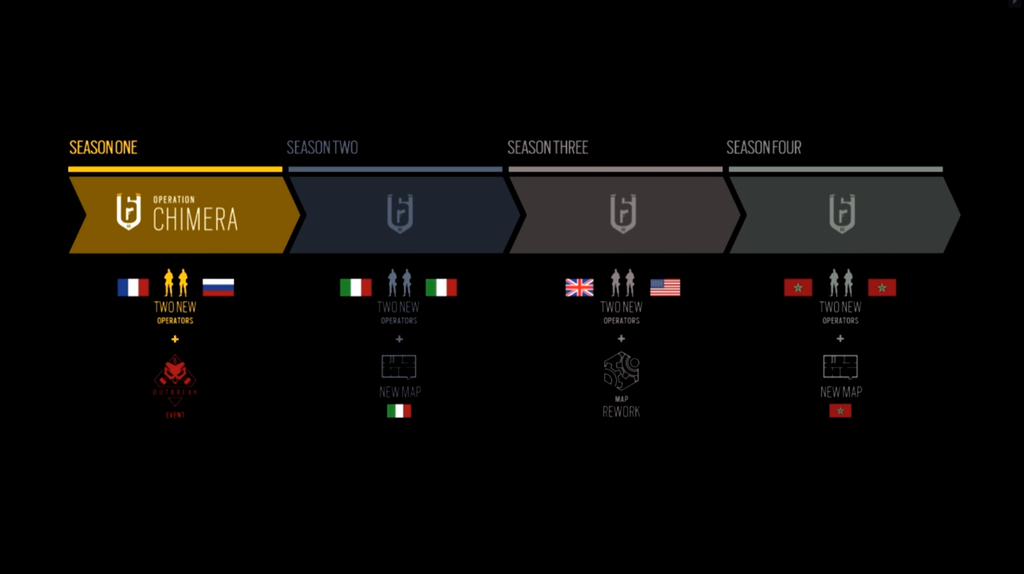 Lastly, Season One of Year Three will feature two Operators who specialise in biohazard situations. This isn’t just a normal update though. It will introduce Siege’s first ever co-op event - Outbreak. This is a month-long, three player co-op PvE event with an exclusive collection of cosmetics and challenges to complete. Ubisoft doesn’t plan to reveal Operation Chimera and Outbreak until the Six Invitational 2018 in February, but it sounds suspiciously like Siege’s version of COD’s Zombies mode.

Rainbow 6 siege is the game that makes me hold faith in the future of Ubisoft.

Never got it, because well, ubisoft.. Don't trust them with online games.
Must admit this looks good, but I bet it's too late to buy into it now..

it's never too late to buy R6S the game is amazing

It's also currently on sale on Steam! Avoid the Starter Edition though, it's not so good...

hmm, very tempting guys, I have 8 days of vacay after tomorrow :p

Uhuh, very steep and little in the way of a tutorial. People should see your level and cut you some slack hopefully. Try and persevere though, it pays off. Easiest Operators to use are Rook for Defenders and someone like Ash for Attackers.

Welcome to Siege man! If you have friends who play it ask them for help and play with them, it's the fastest way to learn. Also I would recommend watching youtube videos of Serenity17 and Macie Jay, you'll see lots of cool tricks there. One last thing, map knowledge is 90% of the game. GLHF!

haha thanks :)
Can't remember the last r6 I have played since vegas 2.
I got some good matches in. I have sledge for attackers and castle for defenders. I want rook though, I love the p90.

the p90 is trash in this game, or at least the MP5 is one of the best. still rook/doc are great ops for new players .

Map looks amazing, operators are original and refreshing(not you Zofia). So delighted to see that Ubi has great ideas even 2 years after launch. The new patch can't come soon enough.
PS: If you're standing in a mute jammer's radius your phone won't ring!

They really do know how to subvert the gameplay. The number of possible Operator permutations now is just ridiculous so you never know quite what to expect. Pretty neat about Mute, always nice to get more uses for his jammer, particularly as the Operator list grows and Twitch/Thatcher become less picked

Will operators have different ringtones? That’d be cool

No it doesn't.It rings aswell, giving away your position.