Up For Debate - How Much Would you be Willing to Pay for a New AAA Game?

The topic of how much we’d all be willing to pay for a game is a thorny one, but you’ve got to be living in dreamland if you believe the $60 price point is going to be adopted in perpetuity. Gaming is pretty much unique in that it seems practically impervious to change. During my 29 years on this Earth, games have actually gotten cheaper, even more so in real terms.

Naturally, a large chunk of this price stasis has been offset by the ballooning popularity of games. Back in the 90’s, AAA publishers had a total addressable market of about 150-200 million, give or take a few million. Now there are two billion gamers worldwide. Back then, shifting 1 million copies of a game was a huge deal. Fast forward to 2017 and Capcom considers Resident Evil 7 a flop for just about falling short of 4 million units sold in its launch year. 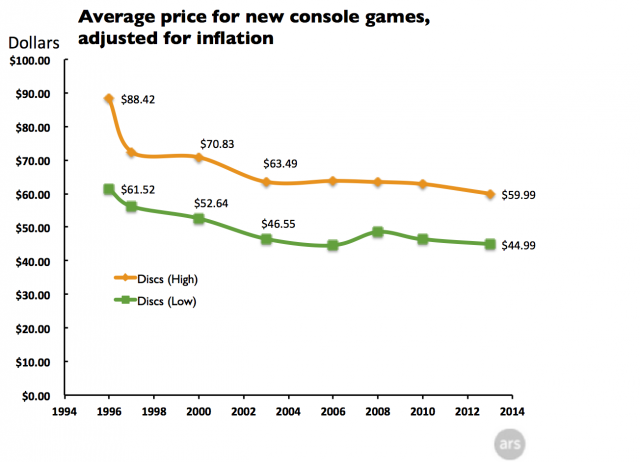 The reason is that the cost of development and marketing these games worldwide has spiralled. Where once we were wowed by the $47 million development cost of Shenmue, this is just a drop in the ocean compared to the Star Citizens, Call of Dutys, and Grand Theft Autos of this world. In order to cover these costs, publishers need to sell more copies of their games than ever to break even. In the case of the big boys, like EA, just breaking even or getting a minor profit on a game is a waste of time. They need to extract huge profits in order to please shareholders, which is why EA, Activision, Ubisoft, etc have turned to microtransactions in order to bolster their bottom line.

At some point or another though, the standard cost of games is, finally, going to have to rise. That’s just the way of the world. But, in the increasingly vocal and vociferous gaming community, is it even possible to get away with this? If AAA publishers were to suddenly bump their prices up to $70 for the base game, could they get away with it? I suspect they very much could, once the initial storm has blown over. Give it a year or so and suddenly the $70 price would feel like the norm.

Should game prices rice though, where would you be comfortable with them settling? What is the maximum price you would be willing to pay for a game that you intend to buy on launch day? Get voting in the poll and let us know why below!

Vote - Click on the bar or text you want to cast your vote on
Did you enjoy this article?
9

Most Anticipated Nintendo Switch Exclusives of 2018

“I don't mind the 3 weeks...but i scheduled 4 days off from my job for the Noember release to enjoy i...” - Saizor

“I was waiting for the last day before I had to tell my boss whether or not I was taking the day off ...” - Alaitoc1422

“Sigh, damn those five players that want to play it on the Stadia for delaying it for the rest of us. ” - Imwhat

How long do you reasonably expect a new GPU to meet your gaming needs?

Which AMD Ryzen 5000 CPU Looks Like the Best Buy?

How do you feel about the Assassins Creed Valhalla and WD Legion system specs?

What PC component do you want to upgrade next?

The discussion area is the place where you get to chat with fellow gamers and techies.
You need to be logged in and have a GD rank of 2 or higher to join the discussion
New - Ordered by date, the newest comments at the top
1 2 3
0
sylencer90
PC Specs

Your Res
Login to compare yours

I was glad to pay around 80 bucks for witcher 3 + all dlcs back then. I assume that's the only game im willing to spend that much money on.

Uncharted territory, less than 30 dollars
Nostalgia feels, 60 dollars and up
Microtransactions, 5 dollars
Incomplete game, what the heck,
Game with DLC, wait for game of year edition
Exciting new game that I know I will like, take my money
DRM up the What's who, I'd rather not
Titles from EA, if it's not Dragon Age, I'm not biting for a while
Ubisoft, respect my brotha, Vivendi be hatin
Multiplayer, what's that
Solo, Solo all the way

I would say as high as $80, if, and only if, it's the whole game. That also means more than 4 - 5 hours of gameplay and trying to call it a full game.

For me, i'm only willing to pay that much (80 bucks) if it's a giant game like The Witcher 3 or the upcoming God of War, but I still would consider it a lot. Heck, I payed that for Watch Dogs 2 and I still regret it to this day

Your Res
Login to compare yours

$60 is what you would pay for a complete game, with all the DLC's included. $45 is a good price I would pay.

60 dollars is a lot of money for me. I don't think there is any game I would want so bad on launch that I would pay more then that. Especially since the quality or the completeness of new games are never complety certain.

I see lots of people only willing to be pay less than $60. Which means you want every game on sale price, nothing full price. Yet, games aren't $60 anymore. Well all know that. $60 buys the base shell of a game, not the full game. $90-$100 is where they sit now with season passes and DLC tacked on. Games are NEVER to going to go back to costing less than $60, be realistic.

well AAA games are never going back to costing less than 10 million dollars with marketing included either, now are they? Most cost at least 25 million and that is withOUT marketing taken into a count.

It hinges on one thing for me: if they're physical or digital copies.

If its a physical copy of the game I won't really bat an eye at £39.99 for a new game. Anything higher is too much.
If it's a digital copy I would if it was £39.99. If it's digital it should be cheaper as the creators don't need to pay for packaging, delivering or creating them. If anything the only thing they may need to pay for is for the use of the servers that hold the game in its archive. £29.99 is max price I want

Besides that, a packaged game is mostly outdated at launch anyway because of release patches/updates

i will never pay more than £60 for a game, any more than that then devs are dreaming, im not paying more when games are sloppy and need countless patches to fix bugs/glitches and crashes etc

Seems the survey could use more brackets. Especially to split the under $60 category.