UPDATE - Dec-06-12:55 - Ummm.... I'm really sorry. That rumoured Portal game due to be announced at The Game Awards? Well, it's leaked. And it's, uh, Bridge Constructor Portal. I didn't see that one coming.

"Hello and welcome back to the Aperture Science computer-aided enrichment center.

"We welcome all lucky applicants to Bridge Constructor Portal with our new vehicle-based test chambers, Quantum Tunnels and patented Aperture technology! For the last yea, we've been secretly working in our underground labs on the next iteration of the million-selling Bridge Constructor series. This new stand-alone title will release on PC, MacOS, Linux, mobile devices, and console, and fully embraces the Portal license, one of the most beloved video game franchises of the last decade."

Well, I didn't see that coming. I guess Valve truly can't count to three. This sits up alongside the announcement of Artifact: The DOTA Card Game as one of the best announcements of the year. Valve's troll game is strong.

If you are in that niche that loves both the Bridge Constructor games and Portal, all your chickens have come home to roost. It's out on December 20th for PC and mobile devices, with a console version to come in early 2018.

Grab the salt, stat. Chairman George, AKA YouTuber Super Bunnyhop, is claiming an insider source has told him a Portal announcement is coming this Thursday at The Game Awards. Admittedly it’s got the worst whiff of Chinese whispers to it, yet maybe, just maybe, there is actually a hint of truth to it.

In a Tweet yesterday evening, Chairman George said “Hearing rumors from a gamedev friend about some Portal *thing* being revealed at the game awards Thursday. Crossing my fingers that they're right, though any Portal anything might feel off without Wolpaw's writing.” He’s referring there to Eric Wolpaw, chief writer on Portal and Portal 2 who’s since left Valve and is working on Psychonauts. 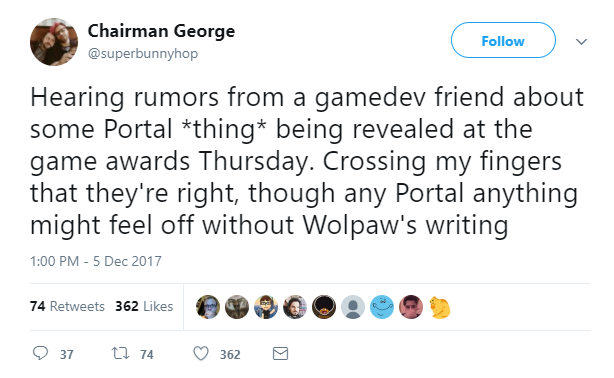 If we were to suppose there’s an element of truth to what Chairman George is saying, this could go one of three ways. The boring route would be a Portal 2 remaster for consoles. The altogether more interesting routes would be Portal 3 built from the ground up in the Source 2.0 engine or, and we think this makes the most sense. A Portal VR game could prove the ultimate system seller for Valve and HTC’s Vive virtual reality headset. Valve kind of pushed against the limits of the portal system with Portal 2, but VR could open the doors to an entirely new style of transdimensional puzzle-solving.

If there’s any veracity to these rumours of a Portal announcement, we’ve got two questions - What are you hoping it will be, and what are you expecting it to be?

Meh... a new puzzle game, based on the portal series... good enough for me, solving the challenges was the fun part for me 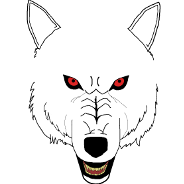 her last word should have been "testing"

im ready to die now valve just give me the word

There is no 3 in the title.

My soul died a little today.

Meh... a new puzzle game, based on the portal series... good enough for me, solving the challenges was the fun part for me

Long shout for a nice sequel and all we've got is this? Shut up...

I know what game it is. Hint: Definitely not Portal 3. Some remastered/VR or worse, a card game.

Portal prequel, they cant count to 3

Ha! It's going to be a Portal themed card game.

I'm hoping Portal 3 but it's probably gonna be VR.