After lying dormant since 2013, CD Projekt RED’s Cyberpunk 2077 has tweeted out a single, hype-inducing message.

Now, hype does get much flakier than this, as the Tweet is just a single word - “beep”. It’s enough for us to know that Cyberpunk 2077 is alive and kicking though and that CDPR is gearing up to talk about its ridiculously anticipated new open-world sci-fi RPG for the first time in years. 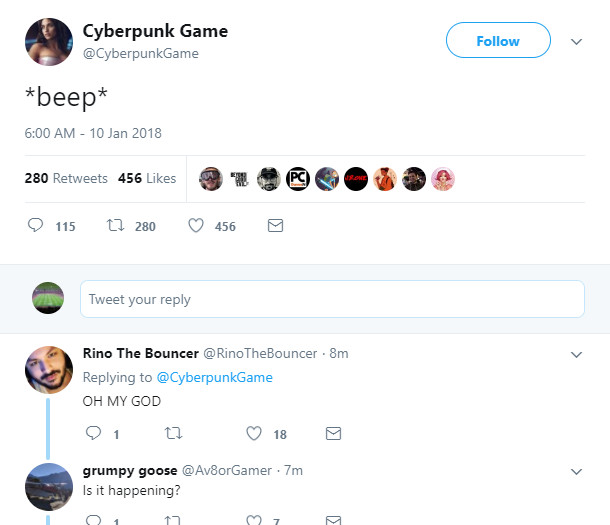 Details on Cyberpunk 2077 are still remarkably scarce, with little emerging from CDPR since the game's announcement in 2012. Since then, CD Projekt released The Witcher 3, one of the most highest regarded RPGs of all time.

Leaks so far have indicated a gigantic open world populated with planes, bikes and rideable robots. There may also be some form of an online component, although CD Projekt RED has confirmed the entire game will playable in single-player.

Last but not least, CDPR CEO Marcin Iwiński said in May 2017 that the Polish developer would be aiming for an element of surprise in terms of Cyberpunk 2077's marketing campaign. “The promotional campaign (for Cyberpunk 2077) is already planned,” he said. "Its main element is the surprise, so I cannot even say when it will begin. Simply because it has to come as a surprise.”

What do you reckon then, could 2018 finally be the year of Cyberpunk? Or is CDPR just messing with our hearts?

oh wow. "Beep", the noise robots make, on the twitter page about a game set in the future.
Hyping stuff up is so easy these days since the audience make a huge deal out of basically nothing.

So beep probably means the start up sound of a machine/cyborg right?
So no one in the comment even dares to say that we get it this year? Everyone afraid of jynxing it? haha

That's the spirit!
Anyway, guessing the next trailer we get will put that beep into context.

Nah, honestly it will be earliest 2019 - even if they have the potential to create it sooner, they're sales numbers would benefit a lot if a little bit more hype is involved - so best chance, an early E3 footage / gameplay this year, hype escalates to extreme level, few more conferences during the year and finally then 8-9 months later, they finally release it

Maybe a startup sound for an actual focused development on it. So idk.

Beep
"That would be one ticket for the hype train"

beep... brace yourselves, boop are coming !

sombra glares at you

i hope it comes out soon. my pc is still pretty badass right now but it won't be for much longer and i do not anticipate ever having the sort of disposable income i had when i built this puppy.

This poses the question: whether it releases soon or 2years from now, will the system reqts change?

i imagine so. if they have a release date in mind i would have thought they'd tailor the requirements to meet with the available hardware at that time. unless they're all done with the engine and the graphical aspects of design. I have no idea if any of that makes sense, just a guess/ but it sounds good haha

kicks Nemrael off the hype train

I buy it if Ciri is in the game. I like train rides bit the hype train is always like a really full train with no free seats so you have to stand and my knee hurts.

There will probably be some Witcher easter eggs, but I doubt that Ciri is going to be a major part of the game, if she's in it at all.

and then we get a beep every 5 years until 2077 :v lol hope to see some gameplay soon, can't wait

hey the math seems to match

is this a GREEN LIGHT-ON button beep, or a SHUT DOWN-RED beep?

I feel the shutdown is more 'boop'

Well, it generated a bit of buzz, yes. Still not quite the same as Rockstar releasing a logo and seeing their stocks go up 6%.

Still think they release the teaser waaaay too early.