The widespread boycott seems to have had a short-lived effect, with EA recovering to its joint-highest share value ever. As a result of the upturn in EA’s fortunes, 24 of 27 equity research analysts have reinstated the ‘Buy’ rating. 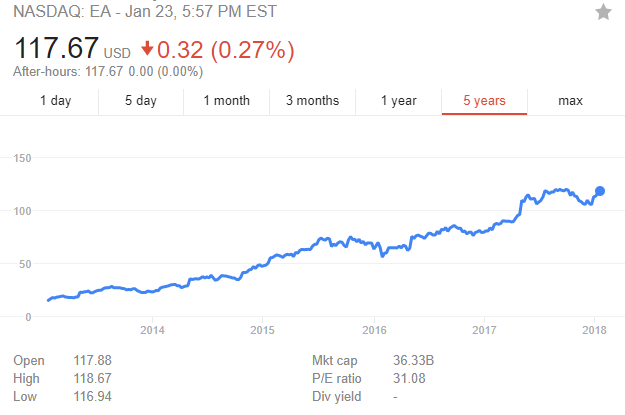 At the moment it’s unclear whether Star Wars Battlefront 2’s fortunes have turned around, or whether this renewed success is down to EA’s other hot properties like FIFA, Madden, and Battlefield. It seems safe to assume though that Star Wars Battlefront II would’ve had a healthy sales bump over the holiday period thanks to a few hefty discounts and Christmas gifting.

Ultimately, despite the furor, which even attracted the attention of mainstream news outlets, it was just a drop in the ocean for EA’s overall business.

After the recovery, do you think the temporary dip will be enough to convince EA to think twice about loading $60 games with microtransactions? Let us know your thoughts!

It has Star Wars on the title, of course it'll sell well.
Let's not forget that at the very least 95% of gamers don't give a fuuuuuck, they don't read news, they don't participate in online forums, no, they see Star Wars, they buy.
All this controversy did was keep the """hardcore gamers""" that follow news and buy stuff day 1 from buying the game. I never expected this to affect the over all sales numbers in a meaningful way.
Think about it this way:
That infamous comment from EA on Reddit: 672.000 downvotes.
PUBG sales: >30M.
This alone should show you that this controversy only ever reached a tiny fraction of gamers.

What's the relationship with PUBG?

Yeah, because of two things. Gamers are easy to piss off and also quick to get tired of whole evil EA thing. So basically, storm is over, no one talks about it, investors aren't scared anymore. And because Battlefront 2 didn't sell all that bad once movie boosted it's sales.

And since it was Christmas season, I wonder how many people got it from clueless relatives as gift, even if they didn't really want to buy it and then if you already have it for free, why not try it. So yeah,storm is over, we move on. That rage would need to be a way longer and more intensive to leave a mark for long.

Does it look bad? I doubt UFC really makes much money for them anyway.

It is absolutely horrendous to the point where punches do different damage depending on what you get from the lootboxes.
I don't know if that's been changed recently, but I gave up on the game entirely after I found out about that and there's nothing that's gonna bring it back on my radar.
If anyone likes this game, I recommend being extremely cautious.

i feel like they could release a pc edition, if it does really well