Crate Entertainment has confirmed Grim Dawn: Forgotten Gods will launch on March 27th for PC, priced at a very reasonable $15.99.

Based on the size of previous Grim Dawn content updates, we expect Forgotten Gods to add potentially hundreds of hours of gameplay for the Diablo-like action-RPG.

It snuck out a couple of days ago without us spotting it but Crate Entertainment took the wraps off the first in-game trailer for Forgotten Gods, the upcoming paid expansion for its Grim Dawn action-RPG.

Grim Dawn: Forgotten Gods will take players beyond the confines of the Erulan Empire, out into the shifting sands and verdant oases of the desert land. It’s set to feature hundreds of unique new items, over 40 new boss types, the introduction of the Otherkeeper class mastery, and a big new story chapter to work through.

In terms of the size of the Forgotten Gods expansion, Crate has provided this handy little infographic here. 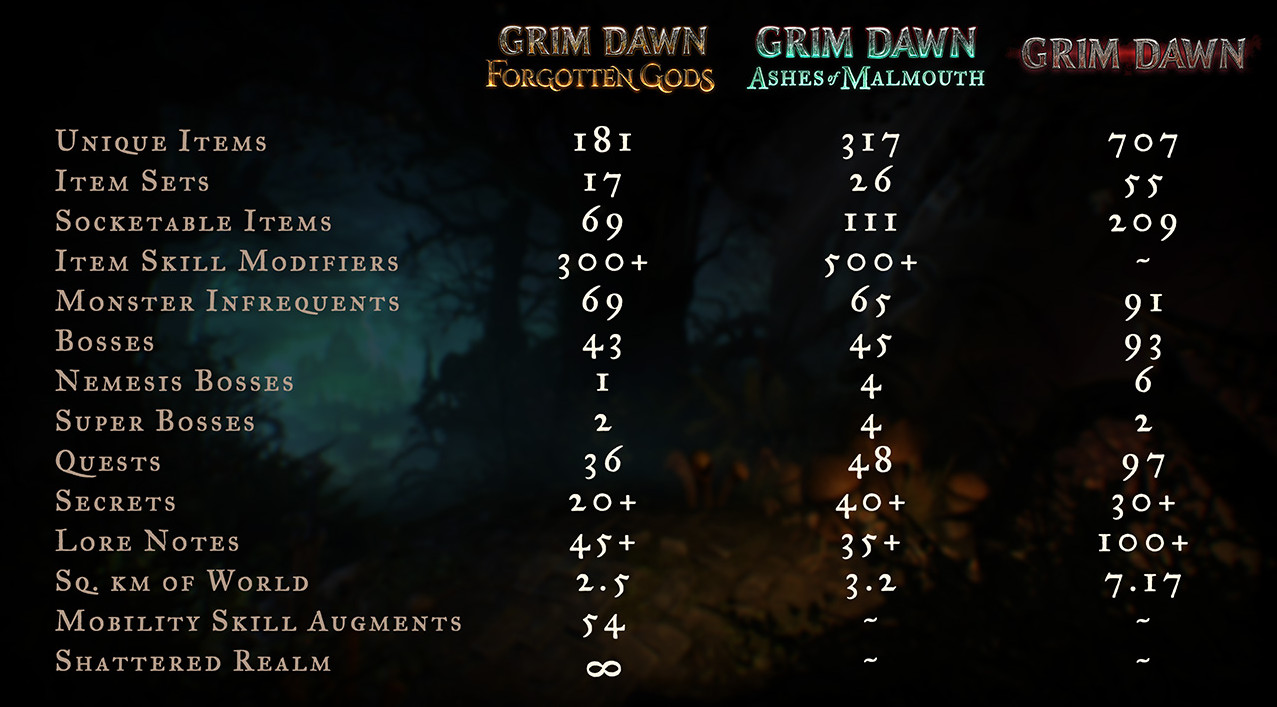 It seems it’s a bit smaller than Ashes of Malmouth but still sizeable in its own right. Looking at the playtimes of the average reviewer on Steam, one thing Grim Dawn ain’t short on is content. However, if you will need Grim Dawn and Ashes of Malmouth in order to be able to play Forgotten Gods. Each expansion is about 75% of the cost of the base game, so you’re looking at around £50 for the entire lot here in the UK. Grim Dawn goes on sale often though, so keep your eyes peeled for any deals.

Grim Dawn: Forgotten Gods is out in March for PC.

Grim Dawn, or GD as we like to call it, ahem, is back for more later this year with the announcement of the Forgotten Gods expansion. If you haven’t had the pleasure of laying your mitts upon Grim Dawn’s lustrous charms, it’s an action-RPG in the vein of Diablo 3, but with a far greater focus on narrative and exploration. It’s pretty fantastic if clicking like a madman is your thing, so it’s always nice to get a bit more of a very good thing.

As you’d expect from an expansion, developer Crate Entertainment is promising a new chapter in the Grim Dawn story, hundreds of new items to loot, quality of life improvements and even a new gameplay mode, although they haven’t specified quite what it’s going to be yet.

“In the Forgotten Gods expansion, you will journey beyond the bounds of the Erulan Empire, traversing burning sands, lush oases and volcanic wastes to reach the sun-beaten ruins of a city with secrets that should never have been disturbed,” says Crate Entertainment. “The flames of a forgotten god have been rekindled, sending ripples through the Eldritch realm and sowing terror even among the Witch Gods themselves.

“The Forgotten Gods expansion will be an exciting densely-packed new addition, whether you are a dedicated player or just starting out with Grim Dawn.

“With development already well underway, we expect Forgotten Gods to release in the second half of 2018!” Suffice to say, I’ve got crate expectations.

Unfortunately, there isn’t a trailer or even any screenshots to pore your eyes over, although Crate has said it’s going to be teasing out additional info for the next few months, beginning with a development update on March 19th.

Love this series, Crate has really delivered with this title

How is GD compared to Torclight 2?

They are both amazing. They just have a very different tone and style to each one. Grim Dawn is more difficult though.

Bet its about Kymon's Chosen and their Deity, Empyrion, The Light-Bringer. Empyrion is an old ancient forgotten god that is ridiculously powerful, as well as the fact that it was dicovered dormant in a far away ruin. But then again this is Crate here. Their DLCs are entire games in their own right, so who knows

Lol I reinstalled it the other day, still one of my favorite ARPGS and the expansions are always full of content, I'm looking forward to this :)

It reminds me so much of Diablo 2. I'm waiting a bit to buy the 2 expansions.