There’s been an interesting development over at the TSMC Technology Symposium. TSMC is a leading manufacturer of GPUs for both Nvidia and AMD, and it’s unveiled its new Wafer of Wafer (WoW) technology that allows for 3D stacked silicon on GPUs.

The technology would allow for faster, more powerful graphics cards without increasing the size of the GPU nor shrinking the fabrication process. This multi-chip approach is becoming increasingly popular and could be the answer for future GPUs and CPUs.

There’s no interposer or interconnect between the two silicon wafers in this new system. Rather, there are tiny 10-micron holes that form a through-silicon via (TSV) connection, allowing the back-to-back silicon wafers to make contact with one another. 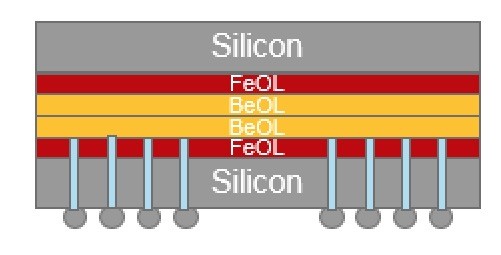 We’ve seen TSV used to great effect with DRAM, allowing for ever-increasing densities on tiny memory chips, but now TSMC is preparing to use the technology for graphics chips. In its current incarnation, two wafers can be stacked on top of one another, presumably with potential for even greater stacks at some point in the future.

At the moment, achieving an acceptable yield from the process is still proving tricky for TSMC. The two silicon wafers are welded together during the manufacturing process, effectively doubling the chance that one of the two wafers is a dud and ultimately making the entire die useless. Success with the Wafer on Wafer technique, therefore, relies on chips with reliably high yield rates, typically achieved when a fabrication process has matured. It means older chip generations are likely to form TSMC’s first successful experiments with WoW, where success rates of 90% are expected.

While TSMC manufacturing plants is currently preoccupied with the full-scale production of 7nm chips, the Taiwanese semiconductor giant is looking to implement Wafer-on-Wafer on both the 7nm and 5nm fabrication processes.

From a GPU point of view, the benefits are relatively simple. Stack two GP102-350-K1-A1 GPUs on top of one another and you’ve effectively got two GTX 1080 Ti’s in one, doubling the core count. If this can be reliably achieved, it would be a massive boost to GPU performance.

As various manufacturers are struggling with die shrinks, it could become feasible to first release the standard GPUs on a new process, and then introduce stacked chips once the process has matured and yields are higher, doubling the performance of the generation.

Can you see WoW being the future of GPU design? Let us know!

This is a very interesting article.

IT seems like TMSC is the true vip's, I wonder can i just submit them a gpu design and they make it for me.

WoW! The price of GPUs will go higher.

Meh, they are currently overpriced due to AMD and especially Nvidia selling them at huge profit margins, miners do NOT count, they are a temporary problem, so if AMD and Nvidia need to they can just sell at lower profit margins and keep the prices the same.

When we can see this new technology in GPUs ?

The idea is not actually new in the silicon market - the main reason its rarely used is that this causes a lot of complications in terms of material stability / durability + a lot of yield loss. For example, in the Automotive market (where the products have to endure temperature changes from -40 to up to +150 *C), this method is not recommended. For consumer purposes, however, why not (but you will need a VERY stable cooling solution for this type of processing unit)

The idea has been here for decades, so has MCM -> Multi Chip Module, what amd calls "infinity fabric"

If i want to upgrade my current GPU, what is better for me waiting for one of those new GPUs or get one of nvidia new upcoming GPUS Volta.

Nvidia's new GPUs are supposed to come out in June, so I'd wait a month or two for sure, instead of buying overpriced-overpriced 2 year+ old GPUs.

does this mean double the heat too?

as long as it does NOT affect heat dissipation it will be fine.

WOW! (literally) But they need to be careful about any copyright issue, McDonald's is on the way!

I have a question and maybe it will be a dumb one but if lets say this happens and 2 GPUs are fused together ( for instance 2 GTX 1080 Ti ) will that be the same as getting 2 of them in SLI or something like what Nvidia did before with the GTX x90 series ( GTX 590 , 690 etc ) ?
Also would that mean optimization would have to be done on the developers side just like now with SLI profiles for that particular GPU ?

No this will(or at least is supposed to at this point) actually function as a single chip, just like a single gtx 1080 or rx 580, but probably with some minor latency initially if they do NOT make both dies share the same shared cache and memory.

And no optimization will remain mostly the same as for current single chip GPUs, the architecture pipeline will change, but that always happens with new architectures that actually have different pipeline stages than the previous for both CPU and GPU and any other logic IC.

Plus x90 functioned as sli. If the application did not support sli, then one gpu was disabled.

Yes having two chips on one PCB or 2 chips on 2 PCBs does NOT matter, it's still SLI just like Daknatexs said
Now with MCM(Multi-Chip Modules), what AMD calls "infinity fabric" this will change, but then there will be two chips on the same die with a really fast interconnection.

I hope that this "multiplier" won't work on the price.

Truer words have never been spoken.

My friend dont say that, what will we do if they hear you. Ssshhh.dont say anything about the price.