You’d be forgiven for overlooking it with all the hype that’s going in with Avengers: Infinity War (Batman dies!), but yet another Star Wars Movie is due to hit the ol’ silver screens in a fortnight’s time. Solo: A Star Wars Story is the second Star Wars movie in five months, and it’s also the perfect excuse for EA and DICE to trot out some tie-in content for Star Wars Battlefront 2 and try to give the sales one final boost.

Star Wars Battlefront 2 will be getting free Han Solo-themed content this week, forming the theme of the next season of content. This typically includes new maps, skins, vehicles and weapons, all, in theory, freely available if you put the time in. 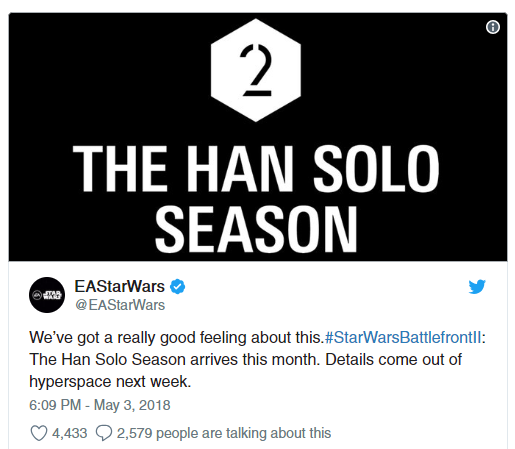 EA has said we can expect plenty more details on the Battlefront 2 Han Solo Season later this week.

Can another movie tie-in tempt you into finally giving Star Wars Battlefront 2 a shot? Have EA and DICE made amends in the months since Battlefront 2’s launch?

It sounded free but I think EA already planned this and includes this Han Solo DLC with current pricing. Part of their marketing strategy of course.

how about just not requiring payments for expansions?

Sad thing is, its actually a pretty decent game when cutting around the whole P2W system. Too bad it failed (and hopefully Solo too!)

See the sad thing is it's a pretty decent game instead of being a great game. The Star Wars franchise with today's tech and an amazing universe along with EA's production value should have been an amazing game. But it's not.

Think if EA actually put in the effort to make a Star Wars game as big and interesting as The Witcher 3 with as many intertwining stories.

NOOOOOO! Batman was my favorite superhero

I still enjoy the game, I'm disappointed its a Han Solo season but its hardly a surprise, Hopefully the content will be decent though.

Wasn't all of Battlefront 2's content supposed to be free to begin with ? Could be wrong, I tried to erase this mess from my memory and forgot so much about it.

I can hardly contain my excitement..... am I the only one who thinks the movie will suck too?

HAHAHA That game is DEAD, just forget it EA! It'll never come back.

Here's to a NEW HOPE, that people will stop trusting EA, especially for Star Wars content and dont give into buying their stuff

And I still ain't touching Battlefront 2.