Yesterday we had the shock of all shocks as Spain crashed out of the World Cup. As it turns out, that was nothing compared to the GD World Cup, where the mighty Assassin's Creed Odyssey fell to the sword. We've got four more games competing in our knockout competition today, and all you've got to do is pick your most anticipated to be in with a chance of winning a grand prize. Simple.

Early tournament favourite The Elder Scrolls VI narrowly made it through to the quarter-finals with a 3-2 victory over Assassin's Creed Odyssey. The fact one is just a logo and a twinkle in the developers' eyes wasn't enough to stop the votes flooding in.

We've got quite the battle on our hands today. The safe, assured hands of Agent 47 in Hitman 2 is a game we can reliably gauge our expectations for, while Beyond Good & Evil 2 is, fantastic cinematic trailers aside, naught but a dream for a creator Michel Ancel.

In the second round is the dealer of death vs the DPD delivery guy as Doom Eternal steps out onto the pitch with Death Stranding. Once is high-octane, demon-ripping mayhem, while the other is a foetus giving us the thumbs up. Who'd win in a match? I don't really have any idea at this point. 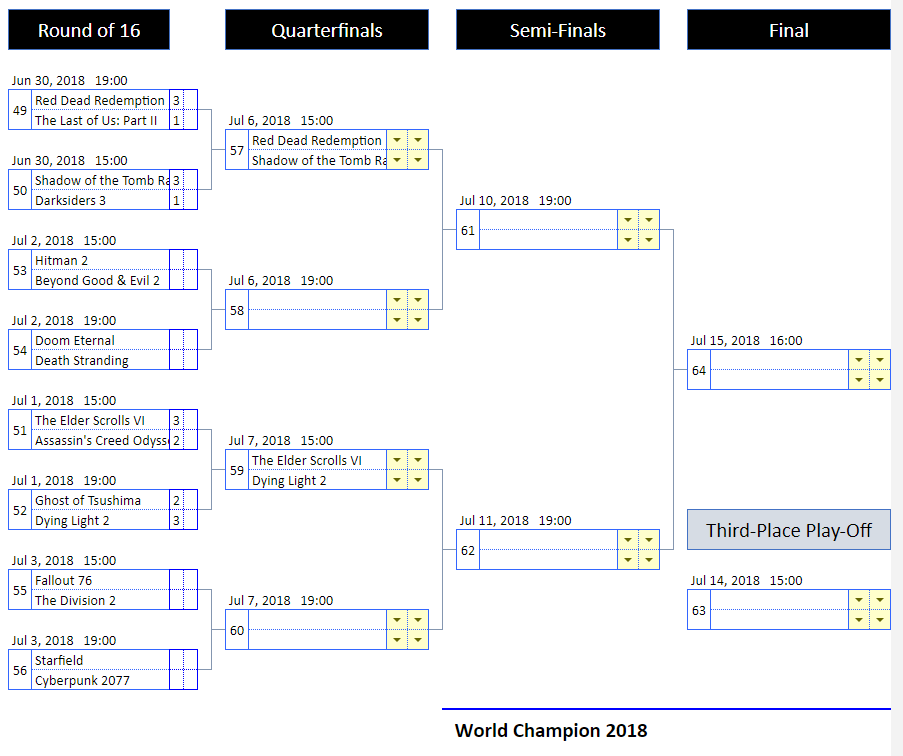 The winner will go through to the quarterfinals, the loser will be knocked out. Nice and simple.

How on earth has Hitman beat BGE2. This is absurd. Wonder how many have even followed all the BGE2 development so far shown to public. Hitman is great but BGE2 is going to be on a completely different scale.

I mean one's a known quantity, the other they seem to just be making up as they go along. BG&E2 is definitely the more ambitious, but I have to agree it's quite hard to get excited about something when even the dev team don't quite know what they're making yet.

Jon has a point. Everyone knows what they're getting with the new Hitman game, BGE2 is still way too out there still.
Same thing I'd say for Death Stranding and DooM Eternal, but that did take the other side .

well CDR knows for sure what they want, while i have no idea what Death Stranding is gona be i hope not a delivery simulator as someone sayed on some of previous articles

I'd argue that we've actually seen what BGE2 plays like. People seem to have forgotten. We've also seen what Death Stranding plays like (Kojima has already said that gameplay has been shown with the HUD off). We haven't seen what Cyberpunk plays like. But I can bet you Cyberpunk will win this competition. :P
Not complaining. Just pointing out our bias/double standards :P But hey, we all have some bias so it's cool.
I know that all 3 of these games will be revolutionary. I think all of them are being developed by extremely passionate and sincere people, so I'll be enjoying them all. I can't wait for them to come out.

"I know that all 3 of these games will be revolutionary. I think all of them are being developed by extremely passionate and sincere people" -.- and where is doom..

Doom is going to be more of the awesomeness that we've already seen from the current Doom. The ones I've listed are either new IPs or in the case of BGE2, coming back after 15 years. Doom's already been around, so we kind of have a good idea. Plus we've had so many Doom games. The others not so much.

I am not doing the x joins y in the QF again. I just feel like it's useless post match commentary, but if anyone wants me to do that just let me know :D

Doom is eternal in my heart.

Hitman 2 and Doom, no question. Hitman was always one of my favorite series and Doom is bloody fantastic!

Hitman 2 and Death Stranding for me

Also Belgium vs Japan was one of the ( if not the ) best games in this WC that i saw , it was full with excitement

I missed the entire 2nd half in that one...I watched the first and it was nice, but I kinda wanted to see goals. I was not gonna wait for pens again and so I quit the game and started listening music at half time...

Damn you watched the wrong half lol. Felt bad for Japan in the end but it was so naive pushing everyone up in the 94th minute. Great goal though, Lukaku's dummy....

Tell me about it...just gonna watch England today. The whole game this time. Hope they win.

And yeah, I've seen the highlights and Vertonghen's header was way better than Lukaku's dummy

Hitman 2. I love IO and they really need the support right now. Death Stranding, because, duh.

I'm really curious about Beyond Good and Evil 2. That game seems really ambitious.

And Hitman will always be Hitman. So...Meh.

I am really hoping that Beyond Good and Evil 2 will be a good game, I am just worried that it's going to be turned in a mess of an open world overly focused grouped made to please everyone bland af game with no soul. Here's to staying on the bright side though, and thinking good thoughts.

seriously AC and Ghost of Tsushmia were already out.. I'm out of poll...

They were inferior compared to the other 2 so yeah its only normal.

Today's gonna be interesting (both here and IRL (Brazil could get sent home)).

I went for Hitman 2 and Death Stranding. It was easy picking these 2

That would be absolute scenes if Brazil went out. Same votes as me! Death stranding was tough though, as I actually think Doom Eternal will be the better game. It's just more exciting because it's not a sequel and Kojima is going to be off the rails

I just don't like the style of game that Doom Eternal looks like and will probably be. Death Stranding seems to have a deeper meaning, a better story...or, at least, that is what I got from what I've seen at E3