It's quarterfinals time. Just 25% of the 32 competing games remain. One of the remaining eight will be crowned the champion and go home as the most anticipated game on the planet right now. Today we've got two fixtures, one that's all about cinematic story-telling and epic set-pieces, the other featuring a tried-and-trusted kill-em-up against the ever-confounding mystery of Death Stranding. You just need to vote for your most anticipated to be in with a chance of winning the grand prize.

Undoubtedly the biggest shock of the tournament so far, Cyberpunk 2077 went from not conceding a single goal in the group stages to crashing out in its first knockout match against a resurgent Starfield. It's not something I think many people saw coming and it kind of blows the entire tournament wide open.

The other match was also a big surprise. It seems Bethesda's decision to shift to a multiplayer focus for Fallout 76 hasn't helped the hype levels. Fallout 4 was one of the most hyped games ever, but it's been sunk by The Division 2. Could we have a surprise winner on our hands?

Red Dead Redemption 2 vs Shadow of the Tomb Raider

We have four games looking to book a slot in the semi-finals. Single-player shenanigans are the order of the day here, with the mighty Red Dead Redemption 2 squaring off against the finale of the modern Tomb Raider trilogy. This is followed up by Hitman 2 versus Death Stranding. The battle of the familiar versus the unknown, a known quantity versus a shot in the dark, but which are you more excited for? Get voting below for your winner. 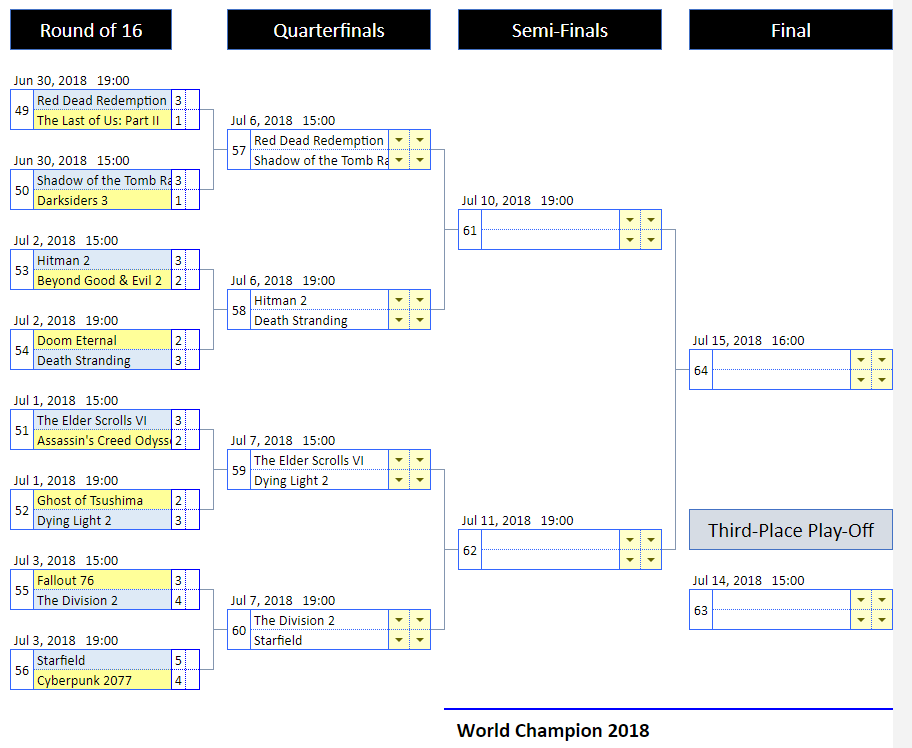 The winner will go through to the quarterfinals, the loser will be knocked out. Nice and simple.

I am late, but since no one else did it, I will do it now. Scores:

Red Dead Redemption 2 and Hitman 2 this round.

Nahhh, this is a juke.

I don't like Red Dead Redemption, so the first one is easy, shadow of the tomb raider.
But the second one is tough, I really like Hitman 2, but Death Stranding seems to be awesome, but I will vote Hitman 2 as I know what it is, while death stranding is new and trailers can be deceiving.

And lost to a game that we know even less than Cyberpunk... These guys love the unknown.

Shadow of the Tomb Raider and Hitman 2.

TR is one of my favorite series. That sums it up.

Hitman 2...well, would have went for Death Stranding if it did not seem so scary. I don't do scary stuff

Scary?! It just seems extremely weird. You must be scared quite fast then if you think its scary.

I mean, there were some invisible monsters in the E3 gamplay sequence....but, fair point, I do get scared easily =)))

The weirdness of it is nice. I dig that. To me, it is new. Everything about DS (that I saw) is new

I hope Red Dead Redemption 2 comes to PC, haven't played a real good cowboy game on my computer since G.U.N and Call of Juarez (the first 2). Bought a PS3 just to play Red Dead Redemption and was worth it. If it doesn't come to PC I might have to do the same with the PS4(Pro) :(