You’ll have to forgive us for being a little bit suspicious, but laptop-focused hardware site LaptopMedia is claiming that Lenovo has confirmed the upcoming Lenovo Legion Y530 revision will feature an unannounced Nvidia GeForce GTX 1160 6GB GPU.

Nvidia has yet to even reveal its flagship desktop chips for the much-anticipated GeForce GTX 11 series but rumours are already flying about the notebook variants. The high-end desktop GTX 11 GPUs are expected to launch in August or September, inevitably followed by a mid-range GeForce GTX 1160, and then we usually have to wait a good few months until the notebook graphics cards start trickling in.

Things could be a little different this time around though, as LaptopMedia has confirmed that the Lenovo Legion Y530 has an updated model due in November or December that will include the next-gen Nvidia GeForce GTX 1160. 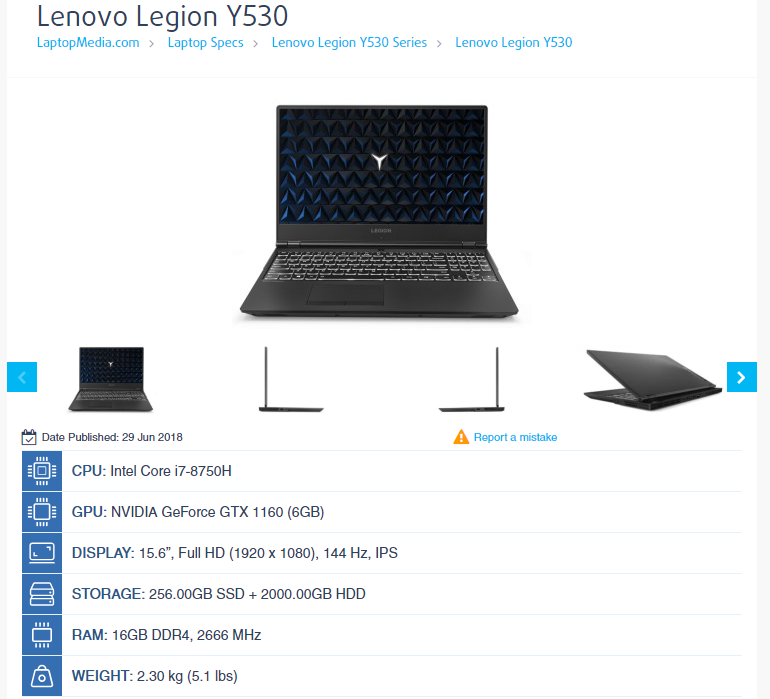 It all sounds pretty straightforward. LaptopMedia has got the scoop directly from Lenovo, who perhaps said a bit more than they were supposed. However, where things get a little trickier is when we consider the Lenovo Legion Y530 is currently only available with either a GeForce GTX 1050 or GeForce GTX 1050 Ti. There is no GeForce GTX 1060 yet, let alone GTX 1160, so could this potentially be a case of crossed wires?

Specifics just aren’t provided, unfortunately, aside from the GeForce GTX 1160 being a 6GB video card, allegedly. This is exactly the same as the current GeForce GTX 1060. The alternative is that this is, in fact, the low-end version of the GTX 1160 and that there’s actually a 12GB version in the pipeline. It’s all absolute guesswork as we haven’t heard a peep about a GeForce GTX 1160 from Nvidia itself.

Why would they when they have no competition and are sitting on too many 10 series cards because they made to many to match crypto demand. now that cryptos in a bear market what will nvidia do with their cards???

Give them for free

It's completely stupid to assume/guess/ speculate a gtx xx60 with Vram greater than 8gb. It would be a miracle if anything below gtx xx80 gets more than 8gb.

I would be very careful with that assumption as 4K needs more VRAM than FHD or QHD ... so in the future VRAM will increase!
I could very well imagine that the GTX 1170 could get 8 GB VRAM

4k is far from becoming the standard lol. 6GB is plenty for a mid-range GPU, its not like it has enough raw power to use more than that properly. Also 6GB not enough for 1080p?! stop

I really wish Nvidia would already drop the specs on their new toys, stop being such tightasses.

Nah, I bought a custom laptop the other day (GTX 1060), I knew there was going to be something around the corner but I needed it for next month so I couldn't wait any longer lol

I doubt there will be much difference - as long as its one of the newer GPUs, that are closer comparable to the desktop versions and are not cut down mobile ones, its not a loss.

Ugh, why did they put ME: Andromeda on the screen... how's that gone persuade anyone to buy this laptop..