We've benchmarked and tested every graphics setting in Monster Hunter World to understand the Frames Per Second Performance Hit. As well as identifying how demanding each graphics settings is, we've also graded how important they are when tweaking your settings.

Using the chart below you can find out just how demanding each setting is. Along with this, we've given priority scores based on how important we believe it is to enable these graphics options.

The further right the bar goes, the more demanding the graphics option is. In the case of Z-Prepass, the bar going left indicates that turning this off actually improved frame rates in Monster Hunter World. 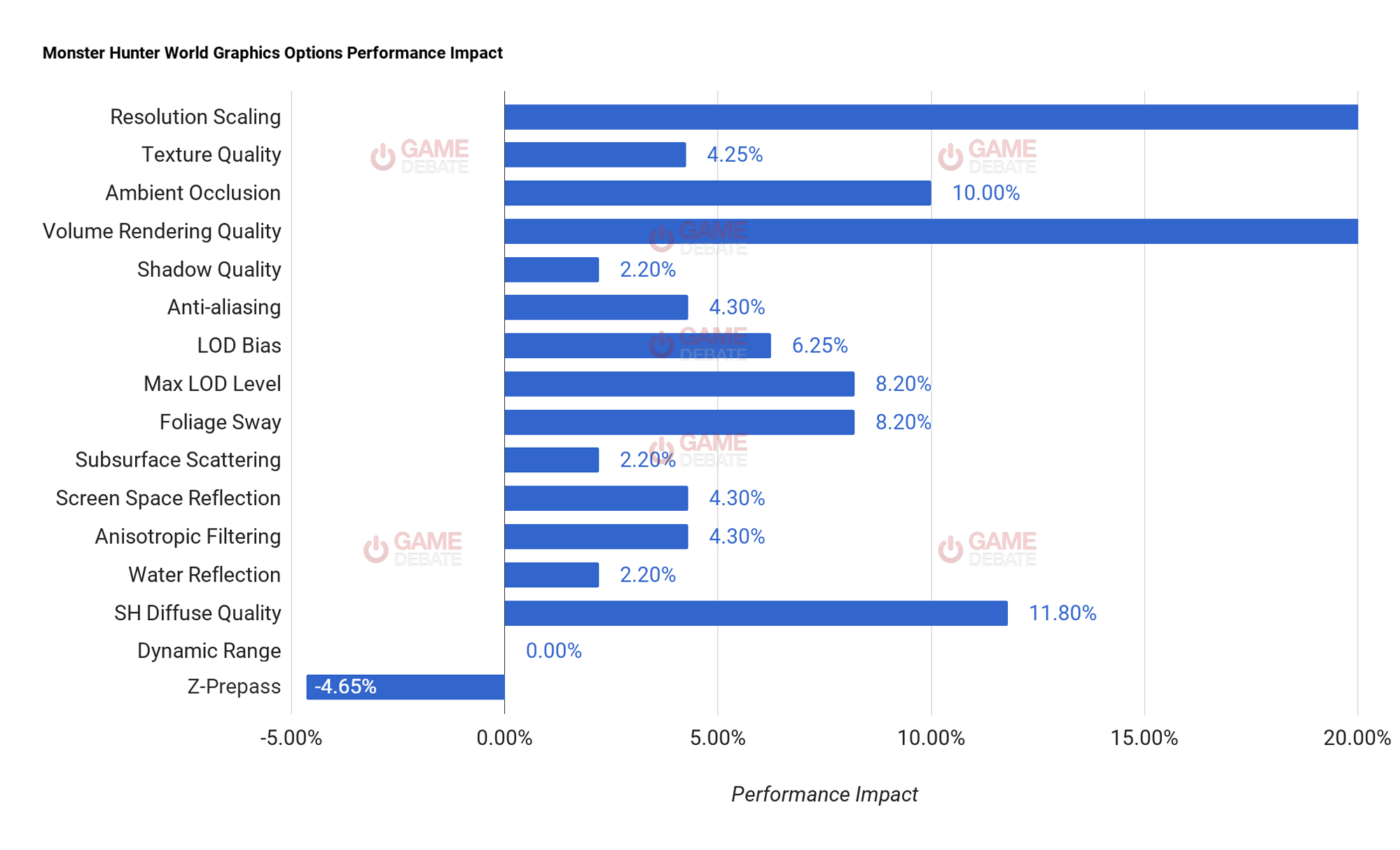 Texture Resolution affects the quality of the textures in Monster Hunter World. During my testing, I wasn't actually able to discern a great difference between Low and Ultra settings, if any difference at all. It does affect the frame rate slightly, meaning it's probably not overly worth setting this to Ultra, particularly if you GPU doesn't have much VRAM.

Ambient Occlusion applies to the contact shadows where two objects meet. With the large, open environments and a distinct lack of hard edges outside of the hub environments, Ambient Occlusion is less noticeable in MonHun World than it is in most other titles. It's also responsible for a 10% drop in frame rate so this comes as a luxury graphics setting.

Volumetric Rendering Quality, or Volumetric Light, is typically one of the most demanding graphics options to be found in the world of PC gaming. Volumetric Lighting helps with those hazy light rays, fog and smoke effects.  In MonHun World its effect isn't actually greatly pronounced compared to normal, so be warned. Despite this it has a big impact on GPUs and could drop the framerate somewhere in the region of 20%.

Shadow Quality does exactly what it says on the tin, affect the quality of the shadows resulting from dynamic light sources. On High, these shadows are distinct, while on Low they are murky and indistinct.

Monster Hunter World offers just FXAA and TXAA forms of antialiasing. The usage of each is going to come down to preference, both offering similar performance hits. Unlike some other graphical settings, AA can be tweaked in-game so just have a play around and find which of the two suits you best.

LOD Bias is used to dictate the culling of plants and foliage in the environment. The higher this setting, the more plants and vegetation are visible in Monster Hunter World when viewed from distance. This creates much denser environments to explore.

Max LOD Level impacts the level of graphical detail on objects in the distance. The view distance in Monster Hunter World can vary greatly from area to area, but the majority actually takes place in enclosed zones that will see little benefit from this graphics setting.

Foliage Sway causes the plants, trees, and grass to sway realistically in the breeze. While Foliage Sway causes an undeniable hit on frame rates, it transforms Monster hunter World from a relatively static looking game to one that's filled with life. In scenes with little foliage, it has almost no impact on performance.

Subsurface Scattering is widely used to simulate how light penetrates a translucent surface, and we can actually see this in effect best on characters' faces during Monster Hunter World's cut-scenes. There's a softening on the shadows being cast on the faces. It's a subtle effect and his a similarly small impact on performance.

A gaming staple by now, Anisotropic Filtering affects the sharpness of textures towards the edge of screen. Textures you're looking at straight on will normally look fine, but when you look at them from an angle they can look blurred and messy. Texture Filtering, or Anisotropic Filtering, sharpens these textures up and leads to a cleaner image. In Monster Hunter World it's pretty difficult to tell the difference between Low, Medium and Ultra.

While we would normally expect Water Reflections to greatly impact the, well, reflections of things in water surfaces, changing this setting doesn't actually seem to do much in Monster Hunter World. Even on Low, the monsters are still reflected in the water's surface. Only turn this setting up if you've got performance to burn then, and image quality improvements are negligible.

One of the heaviest performance hits to be found in Monster Hunter World, SH Diffuse Quality should, in theory, be related to the quality of transparency fades and non-light source lights bouncing off surfaces. In practice though, it's a lot of dropped frames for almost zero increase in image quality. If you're struggling for frames, set SH Diffuse to Low immediately.

This particular graphics setting is basically only worth utilising for HDR monitor owners. On a standard SDR monitor, the difference between 32-bit and 64-bit is imperceptible. If you've got an HDR monitor though, it's going to be worth enabling this setting as it offers no performance hit.

Z-Prepass is actually a new one for us. We've yet to see this graphics setting in any game ever, and we're still none the wiser as to what it does even now. Disabling it actually improved our frame rates by close to 5%, which isn't insignificant. Curiously, Capcom does recommend that low-spec PCs disable Z-Prepass for improved performance in Monster Hunter World. Quite why you'd want it on though, we don't know. 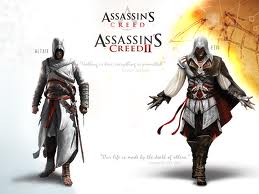 playing with this settings
I7 3770
GTX 1060 6GB
16GB DDR3 1600MHZ RAM
so far maxed everything except volume rendering off, SH Diffuse medium have a steady 50-60 even when there are enemies or even play with 4 people with fancy effects, with the mix of elemental attacks the drop only to 45fps atleast, no stutter, no crash(or atleast not yet) so far good port its not perfect but not terrible

Played with some of the settings today.

Some very interesting things happen when you begin to mess with the settings. With a 75hz monitor turning Vsync on drops the GPU to 50-60% and the CPU to 60-65%

Turned Vsync off again and dropped Volume rendering from highest to high and the GPU goes down to 85-90%, While the CPU jumps UP to to 75-80%

Medium setting the GPU drops another 5%/CPU stays about the same.

Thank you! As someone who is just barely able to run this game this definitely helped a lot. More than ever this game is making me feel like I NEED to upgrade.

I keep everything on Ultra, AA to FXAA and the volume rendering turned off. I prefer the volume rendering off for two reasons:
1) More contrast to the game. I really like it this way. With volume rendering on the whole game looks dusty and milky
2) My framerate jumped from 79fps to 110 in the menu alone (where it renders the forest) at 1440p. Turning this setting off boosts the framerates by 10-35fps, depending on location.

I agree, having volume rendering on causes quite a considerable drop in performance. I do prefer the look of the game with it off too.

Do you play with a mouse or a controller? There's a decent workaround to improve the mouse aim on reddit, worked wonders for me, now the game is finally enjoyable :D
(not perfect by any means, but totally playable, unlike with defaults)

I couldn't imagine playing with mouse and keyboard. So I'm currently using my xbox controllers.

79 fps when maxed out with 1080Ti SLI... this isn't some really good optimization imo

He said before in another post that the game doesnt have sli support, so its a single 1080ti

Ah man, no SLI support sucks. I guess I will have to spend the big bucks when I decide to upgrade my rig.

Since the game uses Resident Evil 6/7 engine, from what I saw on forums, maybe I'll be able to force SLI support :D

Sweet.
Its disappointing that the variable option for resolution scaling does not allow you to specify a target frame rate. Shadow of War works great with it, allowing users to run less demanding parts at higher resolutions without sacrificing fps for the more demanding scenes.

I decided to run Shadow of War at 1080p, so I didn't suffer any problems at all. I do imagine that sieges would be one place that resolution scaling would be very helpful for people with older rigs. I'm willing to bet that my old rig, now my sister's, would have had to put it to good use. (FX-8350+7970 Hgz Edition and no OC on either.)

Their handling resolution scaling is strange in general. It would be awesome if they did what you said though. From what I can remember, Forza Horizon 3 does a similar thing.

Heard that Titanfall2 also has great implementation of variable resolution. This option should be standard for all games imo