More than three million PlayStation VR headsets have been sold since the luxurious peripheral first hit the market in October 2016. A grand total of 21.9 million VR games have been sold, averaging to just over seven gamers per user.

It can often feel like the much-anticipated arrival of VR landed with a whimper rather than a bang, but the likes of Sony quietly continue to publish impressive numbers for technology that’s undoubtedly still in its infancy.

“We’d like to thank all our fans for the amazing support, and we’re thrilled that so many of our gamers have experienced the magic of VR and stepped into the captivating worlds that electrify our senses,” said Mary Yee, vice president of PlayStation Marketing. 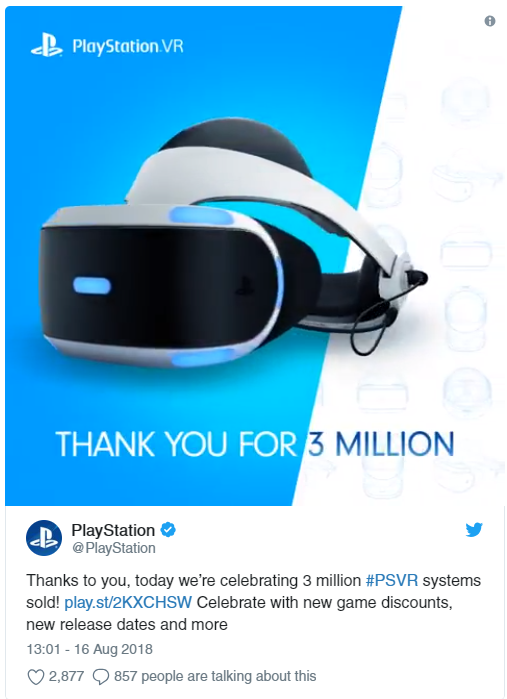 Perhaps the most surprising aspect of this news that the PSVR doesn't appear to be losing momentum. After launching in October 2016, around 915,000 units were sold by February 2017. This figure tool until June 2017 to rise to 1m units, hitting 2m in December 2017, and then finally cruising past 3m units in July 2018. It's not exactly setting the world ablaze but it's certainly steady progress.

Sony also revealed the release dates for two VR big-hitters coming later this year. The Rocky-based Creed: Rise to Glory will be stepping into the ring on September 25th, while class-based sci-fi FPS Evasion will be out on October 9th.

As for what’s popular for PSVR owners, here are the top-ten most played games on PlayStation 4 in North America.

How many of you here on GD have picked up a VR headset? Has anybody given PSVR a shot? Let us know below!

Looking at the top ten games makes me wonder, do people buy the VR set blindly without checking what games are available first?

Maybe it's just people that still play Skyrim that keeping buying them up? I honestly don't know what to tell ya. I see no real incentive to buy one, but maybe I'm just that out of touch with my fellow gamers.

"I see no real incentive to buy one" I share the same view!
Skyrim is a great game, but personally, I wouldn't play it more than once, especially on a platform that (I assume) would be uncomfortable for such a game.

Congrats to the 3 mil suc.. ups , I mean participants!

..
What? You're all thinking it as well!