Nvidia has finally revealed how many of those mysterious RT Cores (Ray Tracing) its upcoming GeForce RTX 20 Series GPUs have.

The GTX 20 Series marks a major departure for Nvidia, arriving with no fewer than three distinct types of core.

First of all, we’ve got the standard CUDA Cores. These have been found on pretty every Nvidia GPU for the past decade and form the bulk of the processing power. A GeForce RTX 2080 Ti has 4352 CUDA Cores in its GPU.

In addition to this, each RTX GPU will also have Tensor Cores and RT Cores. Tensor Cores will handle AI computations and deep learning. The RTX 2080 Ti has 544 Tensor Cores. On top of this it also 68 RT Cores which are dedicated to accelerated ray-traced processing.

So the general breakdown of a Turing GPU works like this. Each Turing TU102 GPU has six GPCs (Graphics Processing Cluster). Each GPC has 12 SMs. Within each SM there are 64 CUDA Cores, 8 Tensor Cores and a single RT Core. 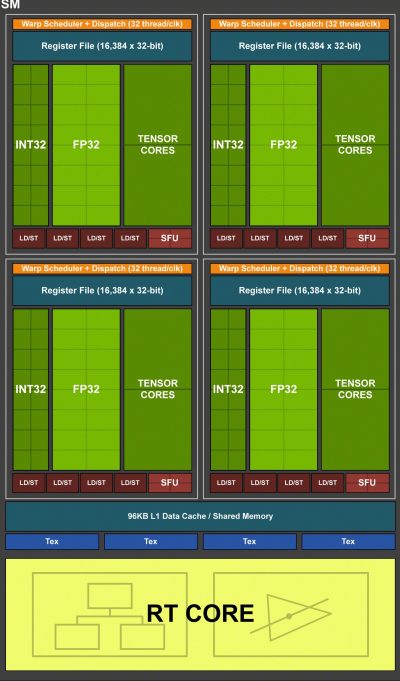 From the sound of things, these additional Tensor and RT Cores are contributing to the goliath size of the GPUs onboard the GTX 20 Series chips. The GeForce RTX 2080 Ti, for example, is an absolute goliath with a 754 mm² GPU die. If we compare this to the previous generation, the GeForce GTX 1080 Ti is comparatively tiny at 471 mm² die size, making the RTX 2080 Ti GPU roughly 60% larger. This goes some way to explaining the eye-watering jump in price from Pascal to Turing, but gamers are going to expect at least a similar leap in performance.

The GeForce RTX 20 Series is out from September 20th and pre-orders are live now.

Just another marketing gimmick to squeeze customers. What is the actual performance gain over last gen when ray-tracing is on? The answer may surprise you! :D

Not sure what my next upgrade will be. At first i thought a 1070TI but i mean if somewhere next year the price of the 2070 is around 600 euro here in the netherlands im almost sure i will take that one.
All in all the RTX future with deap learning system looks really awesome!

Personally I'd prioritize raw performance over fancy bells and whistles, the first generation of a new technology never lives up to the hype, it takes a few generations for it to really catch on and become polished to perfection.

And if everyone held the same view then nobody would buy products, the bells and whistles would not get perfected and the following generations would still suck...
Not that Turing performance looks crap to begin with anyway.

So what do you recommend? That everyone should be buying products based solely on the marketing by the manufacturer themselves? That all the new bells and whistles should be more than enough incentive to buy the product then and there.
Turing does look impressive, but he also has a point.

I'm not saying he doesn't have a point - quite the contrary. But that there's no need to look down upon those who like the new tech. It's a symbiotic relationship - both sides need each other :)

I'm not looking down on anyone, it's your money, spend it how you like, you'll get no judgement from me.... what I'm saying is that if you want the best value from a video card purchase, you don't buy it based on a new technology that may or may not be great in the future, you buy it based on how it performs NOW without that tech, and at a price you're willing to pay for THAT performance.... if you want to be an early adopter, fine, but early adopters rarely get the best bang for the buck.

But there is the thing. Ray tracing and deep learning (especially deep learning) looks very very promising in my opinion.
But, like said above, that when a technique first comes out it need time to widespread so to say.
Still it is a hard choice then, cause for me when something is available and i have the coin i find it rather hard to wait.
But maybe this once i should wait and buy the 1070TI

2080Ti has 48% more RT cores yet the RT performance is only 25% faster... I wonder if that has anything to do with lower standard clocks on the 2080Ti...
Three thoughts here:
1) I wonder if they take into consideration stock speeds or the factory-overclocked Founders Edition spec
2) I wonder how well the 2080Ti overclocks. Because a 1080Ti can pretty much run clock-for-clock with a 1080 (I've done 2.1GHz on air on mine, two 1080s and two 1080Tis at full load - though the PC did sound like a turbo jet when rendering xD). So I hope a 2080Ti can also overclock well, especially with that beefier cooler.
3) Will there be a global overclock or will we get to OC various parts separately..?

If We can overclock 2080Ti RT cores to the same level as 2080 - we should reach pretty much 12 Giga-rays/s in RT, by my math. Which is quite substantial.

Already did during the livestream :)
Shipping should begin on 20th of September.

So with this next gen we are geting tensor and ray cores, while getting a bigger die size, i think this could explain the price increase, tho it could be slightly lower, but thats just my opinion tho.

Not gonna lie very interested in the 2080 TI. It’s gotta be substantial though like 50% faster than the 1080 TI substantial

That's what Nvidia told us. I'd rather wait for proper benchmarks though.