This PC performance article focuses on Shadow of the Tomb Raider frame rates and will provide us with a graphics card frame rate guide for when the game launches on September 14th. This will be considered an evolving editorial article, that we will continue to update as more Shadow of the Tomb Raider frame rate data is published around the net, as we complete our internal hardware analysis on the game, but especially as you submit your FPS results to Game-Debate.

To start things off we will be using a combination of user-submitted data taken from the similarly specced 2016’s Rise of the Tomb Raider, the official Square Enix system requirements for Shadow of the Tomb Raider, and GD’s own number crunching database.

The interesting thing about comparing PC hardware to the expected frame rate performance is that data influences change all the time; drivers are released, unexpected hardware performance bottlenecks or perhaps specific graphics card bugs. Despite that, we expect our experience and data should put us roughly in the right ballpark in terms of frame rates, giving us a guide to how well PC systems can run the new Shadow of The Tomb Raider and we will, of course, revisit this article once Shadow releases. With that in mind, this Shadow of the Tomb Raider graphics card frame rate article will serve as a place for us to share our collective experiences and hardware knowledge, particularly in regards to Tomb Raider’s past and present performance issues.

Beginning at the high end of the hardware requirements, we see the recommended specs for Shadow of the Tomb Raider are roughly 10-15% more demanding than the 2016 Rise of the Tomb Raider. That’s not a great deal, so we believe if you could run Rise without any trouble then Shadow shouldn’t be an issue either.

Looking at the Ultra/1080p benchmarks provided for Rise of the Tomb Raider, they vary from around 45fps for the GeForce GTX 1050 Ti, up to 70 FPS with the GeForce GTX 1070. But it should also be noted that there are a few outlying results as well.

Possible data anomaly - We notice that there is a result for the Radeon RX 470 Nitro 8GB reporting 86 FPS on 1080p ultra. It is coupled with 16GB RAM and a solid Core i5, but this result seems pretty high. It could have be taken at a less demanding point in the game, but for the sake of variety it is worth putting in for people to see. It could of course reflect Rise of the Tomb Raider favouring AMD optimisation. If nothing else it serves to give those of us with slightly weaker systems some hope that hardware performance is not just black and white and perhaps our system could run SotTR better than we are being told.

Based upon this FPS data, here is how we expect these GPUs to perform when running Shadow of the Tomb Raider calculated at 13% less performance than 2016 Tomb Raider FPS results. 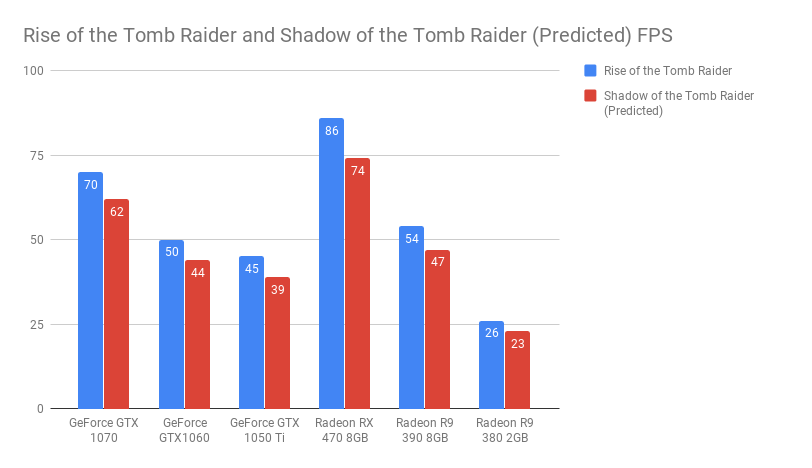 Let's take a look at some frame rates that were returned on Low settings for Rise of the tomb raider and extrapolate what that might mean for gamers looking to play Shadow of the Tomb Raider on Low settings, or running on minimum requirements for the game.

Down at the lower-end we’re expecting to see a similarly small squeeze on performance. AMD’s Radeon R9 380 is the suggested minimum spec GPU for Shadow of the Tomb Raider. Last time around the Radeon R9 380 could run at 60fps on 1080p under Low graphics settings, although we expect it to dip down to around 53 frames per second when playing Shadow of the Tomb Raider. Those with an R9 380 hoping to hit a locked 60fps may be forced to drop the monitor resolution down to 900p while playing.

Conclusion - If you could play 2016 Rise of the TR then the min system specs are pretty similar this time around so you will be able to run 2018’s Shadow of the Tomb Raider.

Ok, that should give us enough to start the Tomb Raider frame rate discussion off. Share your own Rise of the Tomb Raider FPS results below but deduct 13% from the score to give us all a rough idea of the Shadow of The Tomb Raider results.

Once Tomb Raider Shadow releases we will update this article with a section on our official frame rates, coupled with a section on your user submitted FPS. So please visit this page to add them so we can compile your data into this comprehensive real world Frame Per Second report for Shadow of the Tomb Raider. The more data that’s added, the more accurate our FPS results can be for Shadow of the Tomb Raider and other future AAA games.

Play ROTTR Everything maxed except 2X SSAA (DX11 1080p) get frame drops in the geothermal valley around 40-50FPS, but GPU usage is 75% average in other areas with steady 60FPS. Upgraded my rig for SOTTR, I can't wait!

Well it technically is maxed as SSAA doesn't count towards maxing out a game or not that just doubles the resolution and down scales it so if you had that setting at x4 SSAA you be running the game at 4k.

My guess is the benching team doesn't own any of them to measure or they keep to the mid-range and the lower end because that's what most people have.
I don't really mind. I look at the benches for a 1060 and go "ok, so if it gets that much then my rig will get at least double - I'm happy with that"

But Shadow Of the Tomb Raider has inferior graphics.

Funny you say "inferior graphics" when you rely on video's instead of playing the game when it comes out.

I think its a mistake - its either VEGA 56 or 64, cause its also ahead of the GTX 1070 as well xD. If anything, it should not be ahead of the R9 390 (even with 8 gb) and cmon, this is a NVIDIA title - not that AMD should not perform well, but usually in such titles AMD is a little hindered to that NVIDIA looks better xD

You do know this is one of the few Square games that doesn't have the AMD logo showing in the start when opening the game cause with Deus Ex and Hitman those 2 games always showed AMD Evolved.

For sure medium / tweaked high for 50+ fps. For solid constant 60 fps everywhere I doubt even low will be enough, doubt it will be this well optimized

Just hope i can run this game maxed out.

yikes and this is 1080p? I was hoping to see the 1070 get at least above 80fps for 1080p either the game is using more resources or bad optimization. From the trailer I think they are using a lot more geometry than their previous titles

Well, the gtx is more like a 60-80 fps card at ultra settings with medium AA at 1080p, the gtx 1060 isnt a 60 fps GPU anymore, this happens because new gen card are just around the corner.

Does PDA make that much of a difference?

That's the first thing I thought.

Honestly the 470 shouldn't be higher at all cause for RottR that was mostly supported on Nvidia cards.