Here we benchmark each individual graphics setting in Shadow of the Tomb Raider for its performance hit, as well as recommending how important it is for you to enable it.

For the benchmark results below we used an MSI GeForce GTX 1060 Gaming X 6G, an Intel Core i7-5820K processor, and 16GB DDR4 memory. Shadow of the Tomb Raider was tested at 1080p screen resolution for the purposes of this benchmark, with the average frame rate taking during a sprint through a jungle portion of the game about two hours in. 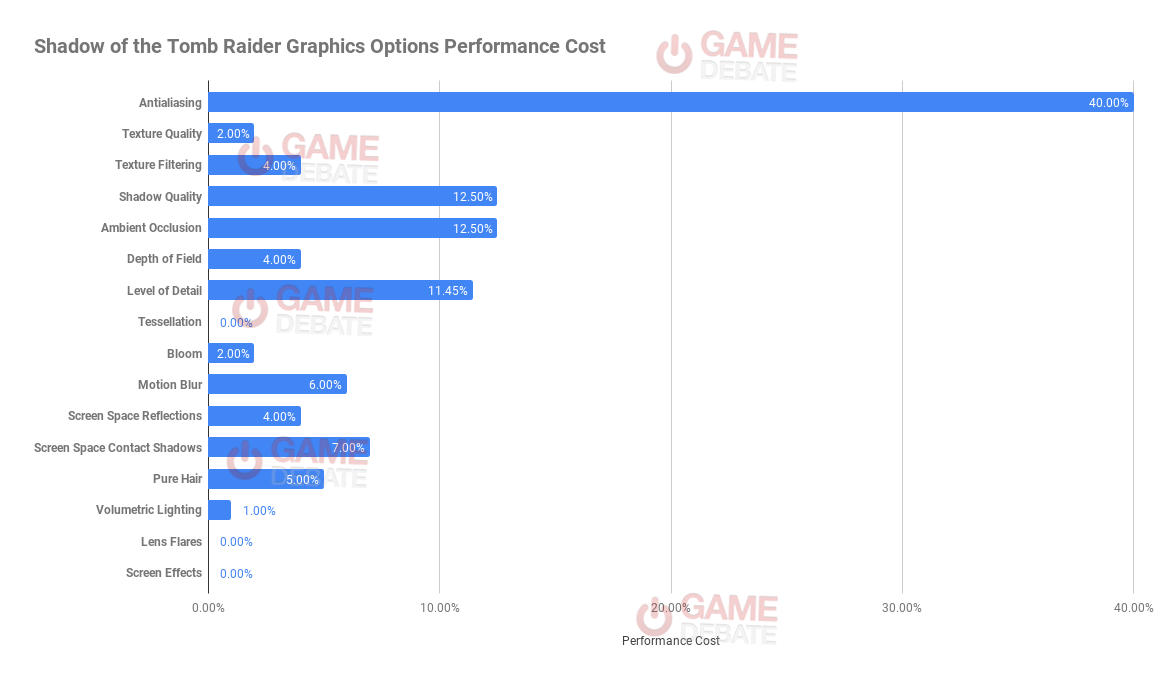 A gaming staple, antialiasing options smooth out jagged edges on geometry. The higher the AA quality, the sharper and more distinct the edges of an object are, while no antialiasing can cause a shimmering effect. Shadow of the Tomb Raider uses SMAA, TAA, SMAAT2x, and SMAA4X. Both SMAA and TAA are fairly light options, while SMAAT2x combines both at double the performance hit. SMAA4x is the highest quality multi-sampling option though. It easily looks the best but it comes with a massive performance hit. TAA is recommended.

Texture Quality affects the resolution of the textures in Shadow of the Tomb Raider. The performance hit is negligible and is primarily affected by the amount of VRAM on your GPU.

Texture Filtering, sometimes known as Anisotropic Filtering, improves texture quality when viewing surfaces at an angle. In Shadow of the Tomb Raider this is a fairly low-end performance hit and we recommend you set it to at least 8x Anisotropic.

Pretty self-explanatory, Shadow Quality affects the level of detail and realism of shadows produced in Shadow of the Tomb Raider. Turning up Shadows can cause a fairly large performance hit but it contributes a great deal to image quality and the realism of a scene. Completely turning off Shadows will dramatically improve performance in Shadow of the Tomb Raider for those with older or weaker CPUs and GPUs.

Ambient Occlusion applies to the contact shadows where two objects meet, adding depth to the game world. Shadow of the Tomb Raider offers two options - BTAO and HBAO+ (for Nvidia users). HBAO+ is the more demanding of the two but BTAO still offers a great visual improvement. Considering the 12.5% drop in frame rate for HBAO+, BTAO is a sensible middle-ground.

Depth of Field is a pretty commonplace visual trick designed to simulate the effect of looking through a camera, providing a more cinematic experience. Depth of Field blurs objects which are out of focus. Applying this will come down to personal preference as the performance impact isn't overly noticeable.

Level of Detail affects the distance at which objects fade to a lower detail level. The difference between Low and Very High is mammoth in Shadow of the Tomb Raider. On Low, objects pop into view just a few feet away. Dial this up as high as you can. Lowering the quality will significantly improve CPU performance.

Bloom is an effect which adds bright spots onto the screen to show light bleeding in. Some people find this an obnoxious effect, some don't, so your mileage will vary. The performance hit is negligible.

Another controversial graphics options, Motion Blur blurs geometry along the direction it is moving. Not only a visual effect, Motion Blur can help to mask poor performance. Conversely, disabling Motion Blur can improve frame rates slightly.

The Screen Space Reflections setting in Shadow of the Tomb Raider enables reflections that are created by ray-marching into the on-screen image. This is not ray-tracing. Disabling SSR will improve graphics card performance.

Tomb Raider and hair physics go together like peanut butter and jelly. This time the feature is called PureHair. This setting renders and simulates individual strands of hair using the GPU. Frame rates drop around 5% by enabling this feature, but Lara's pony tail will flop about semi-realistically.

Volumetric Lighting is a particularly nice looking graphical feature in Shadow of the Tomb Raider, realistically casting beams of light as it passes through the jungle canopy or lights up dust environments. In terms of atmosphere, this graphics setting improves SotTR a great deal, and with a surprisingly low cost to performance.

Michael Bay's favourite graphics option, Lens Flares allows bright lights to create internal reflection and scattering artifacts as if viewed through a camera lens. This setting has no impact on Shadow of the Tomb Raider's performance and is a matter of personal preference.

Screen effects refers to blood and dirt that can appear on the screen, simulating these items being smeared across a camera lens. This setting has no impact on Shadow of the Tomb Raider's performance and is a matter of personal preference.

This game looks absolutely stunning no wonder it's so demanding.

I have a question regarding the AA option. As soon as I turn it on why does the game get blurry and it feels like there has been graphical downgrade because the sharpness also decreases. But with it off the picture becomes much more sharper

Any idea why this happens?? Does anybody else have this issue in any other game?

Which version of AA are you using? TAA will introduce significant blur, that's done on purpose to eliminate sharp edges. SMAA will blur less the higher you go and provide a sharper image

Yeah, what Jon said. Heavy blur is present in most temporal solutions (TAA, TXAA, etc). They're good in terms of removing shimmering, but I can't stand the blur unless I render at something much higher than native res...

SMAA is better if you want a sharper image, TAA is just too blurry for my liking.

Well, I use the recommended TAA or SMAA2x. I have tried both and they are both blurry for me. I think I'm just going to turn it of, my eyes start to hurt after a while with it on. Anyways, thanks for the reply guys.

Also do you think its possible for game developers to smooth out the the game without causing the blur..?
Anyways thanks again..!!

you can increase resolution to like 1080p or even 1440p and apply fxaa, it will look smooth but not that blurry.

I love these types of details as you can see exactly which effects performance the most. Knowing which to tweak to improve performance is great. Thanks:-)