This PC performance article focuses on Assassin's Creed Odyssey frame rates and will provide us with a graphics card frame rate guide for when Ubisoft's open-world game launches on October 5th. This will be considered an evolving editorial article, that we will continue to update as more Assassin's Creed Odyssey frame rate data is published around the net, as we complete our internal hardware analysis on the game, but especially as you submit your FPS results to Game-Debate.

To start things off we will be using a combination of user-submitted data taken from the similarly specced 2017’s Assassin's Creed Origins, the official Ubisoft system requirements for Assassin's Creed Odyssey, and GD’s own number crunching database.

The interesting thing about comparing PC hardware to the expected frame rate performance is that data influences change all the time; drivers are released, unexpected hardware performance bottlenecks or perhaps specific graphics card bugs. Despite that, we expect our experience and data should put us roughly in the right ballpark in terms of frame rates, giving us a guide to how well PC systems can run the new AC Odyssey and we will revisit this article once Odyssey releases and enough user benchmarks have been fed in. With that in mind, this Assassin's Creed Odyssey graphics card frame rate article will serve as a place for us to share our collective experiences and hardware knowledge, particularly in regards to Assassin's Creed and the AnvilNext 2.0 game engine's past and present performance issues.

In terms of system specs, there are a lot of parallels that can be drawn between last year's AC Origins and the upcoming AC Odyssey. It's only been about 11 months since the last Assassin's Creed game launched, which means Ubisoft probably hasn't had much time to improve the series, visually at least. This is reflected in the system requirements, with the GPUs being the only noticeable changes from one outing to the other. The shift from a GeForce GTX 760 or Radeon R9 280X to a GTX 970 or R9 290X is equivalent to around a 66% bump in performance demands.

This increase in minimum and recommended graphics cards probably isn't down to massively improved visuals, it's probably because the minimum and recommended GPUs for AC Origins were too low in the first place. AC Origins an absolute performance hog for both GPUs and CPUs, and the GeForce GTX 760 just couldn't cut it at 1080p with high visuals. Because of this, we expect Assassin's Creed Odyssey's performance to be very similar to Assassin's Creed Origins.

AC: Odyssey runs on the same AnvilNext 2.0 game engine used for AC: Origins, but it's also been used for Ghost Recon Wildlands, Steep, For Honor, and Rainbow Six Siege. All of these games offer vastly different performance, but really it comes down to scale. Assassin's Creed Odyssey is on a larger scale than just about any of these games, and the larger the scale, the more unreliable the performance. This is demonstrated by Ghost Recon Wildlands, which runs terribly in comparison to For Honor.

The vast ancient Greek world that players can explore has a huge amount of detail, plenty of NPCs, and a massive draw distance, making Assassin's Creed Odyssey a game that will be extremely CPU-heavy. A solid quad-core CPU is the absolute minimum, but even the Core i5-2400 could ultimately prove quite a bottleneck.

Due to AC Odyssey being so reliant on the CPU, while still requiring a hefty GPU, this lends a different aspect to the performance predictions. Benchmark results from users in Assassin's Creed Origins tell us users with the same graphics card, playing at the same graphics preset, and rendered at the same resolution, can experience wildly different frame rates depending upon their CPU. One user has a GTX 1060 6GB paired with a dual-core Intel Core i3-6100 and hits 40fps on Ultra @ 1080p, while another with a GTX 1060 3GB but a Ryzen 1400 quad-core claims to be hitting 80fps. The latter benchmark seems a little high, somewhere around 45-60fps seems more likely, but the GTX 1060 6GB user is almost definitely being hobbled by slower CPU performance.

Let's now take a look at some frame rates that were returned on Ultra settings for Assassin's Creed Odyssey and gain an understanding of what that might mean for gamers looking to play AC Odyssey on Ultra settings, or running on recommended requirements for the game. 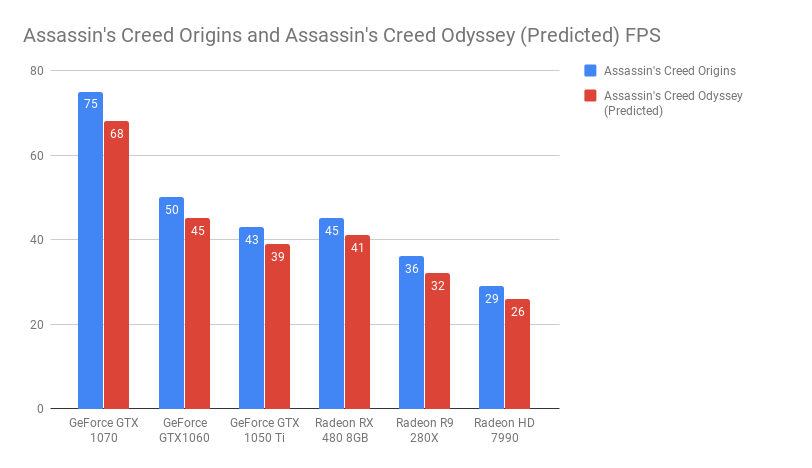 Based upon the higher system requirements for Assassin's Creed Odyssey, we are expecting an average 10% performance dip overall when playing at 1080p / Very High. The recommended system specs for AC Odyssey are clearly aimed at 30fps, so anyone with an equivalent GPU should be looking to lock the frame rate at 30fps for the most stable performance.

Hitting 60 frames per second, even at 1080p, is probably going to be quite a challenge in Assassin's Creed Odyssey, just as it was in AC Origins. The dependence on CPU is going to have a large part to play though, so even high-end GPUs will struggle with 60fps if you only have a quad-core CPU with no multithreading.

Conclusion - If you could play 2017 AC Origins then the min system specs are pretty similar this time around so you will be able to run 2018’s Assassin's Creed Odyssey. However, low and mid-range GPUs may struggle slightly more to achieve a stable frame rate so you may need to drop a few extra graphics settings and lock the frame rate.

No matter what graphics card you throw at AC Odyssey, our benchmark data for AC Origins heavily suggests that your CPU will play an important role in achieving high frame rates. AC Origins can very easily hit 100% CPU load and become the bottleneck for the season, as demonstrated in the benchmark data below. Both the Intel Core i7-8700K and Core i7-7700 are fantastic top-end CPUs but AC Origins will guzzle whatever performance you throw at it.

Once Assassin's Creed's Greek Odyssey releases we will update this article with a section on our official frame rates, coupled with a section on your user submitted FPS once enough data has been submitted to the site. So please visit this page to add them so we can compile your data into this comprehensive real-world Frame Per Second report for AC Odyssey. The more data that’s added, the more accurate our FPS results can be for Assassin's Creed Odyssey and other future AAA games.

Everything running on ultra these few days. No problems so far. 55-65 FPS. No V-sync. No stutter. Oh and if you really want to increase frames, just disable DoF. Don't like it anyway in any games i ever played.

Found my own leak. Read the footnotes. https://www.amd.com/en/support/kb/release-notes/rn-rad-win-18-9-3

Rx580 gets about 52fps high presets at 1080p, v64 gets 57fps at 1440p high. Seems like another unoptimized title for AMD users. Wonder what I'll get in ultrawide on high, probably exactly the same as Origins, stuttery mess.

I hopw they patch it

Very cool, thanks for the info.

I'm gonna sell my scooter so I can buy this. :P
I'll probably only end up running it on 1080p though, like I did with Origins.

I just want a really consistent frame rate and 4K doesn't really matter to me on big open world games. Tbh, I probably went overboard on the 1080 Ti, but it's something I really wanted at the time. 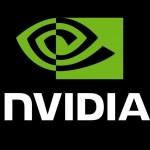 I am surprised too, i think its the 1 GB version this is why, wonder how my 2GB will perform

I could run origins on low 25+ fps, i hope this brings similar results

If it's the same as Origins, then user with quad core or less is out of luck.