After our initial run through Assassin's Creed Odyssey earlier today, one thing was immediately apparent - Ubisoft's new open-world adventure likes to burn through CPU resources like nobody's business. Naturally, we wanted to know exactly how demanding on the CPU Assassin's Creed Odyssey actually is. So, we put AC: Odyssey through its paces in a series of benchmark tests designed to simulate various different processors.

Following our GPU benchmarks earlier today, today we're looking at the impact CPU core count has on AC Odyssey's performance. Recent Assassin's Creed games have been incredibly taxing on processors, and we're eager to find out if this is still the case.

The processor we're using is the 6-core/12-thread Intel Core i7-5820K, running at stock clock speeds (3.3GHz base). The number of cores and threads utilised by the Intel Core i7-5820K were then tweaked in order to simulate performance on weaker CPUs. 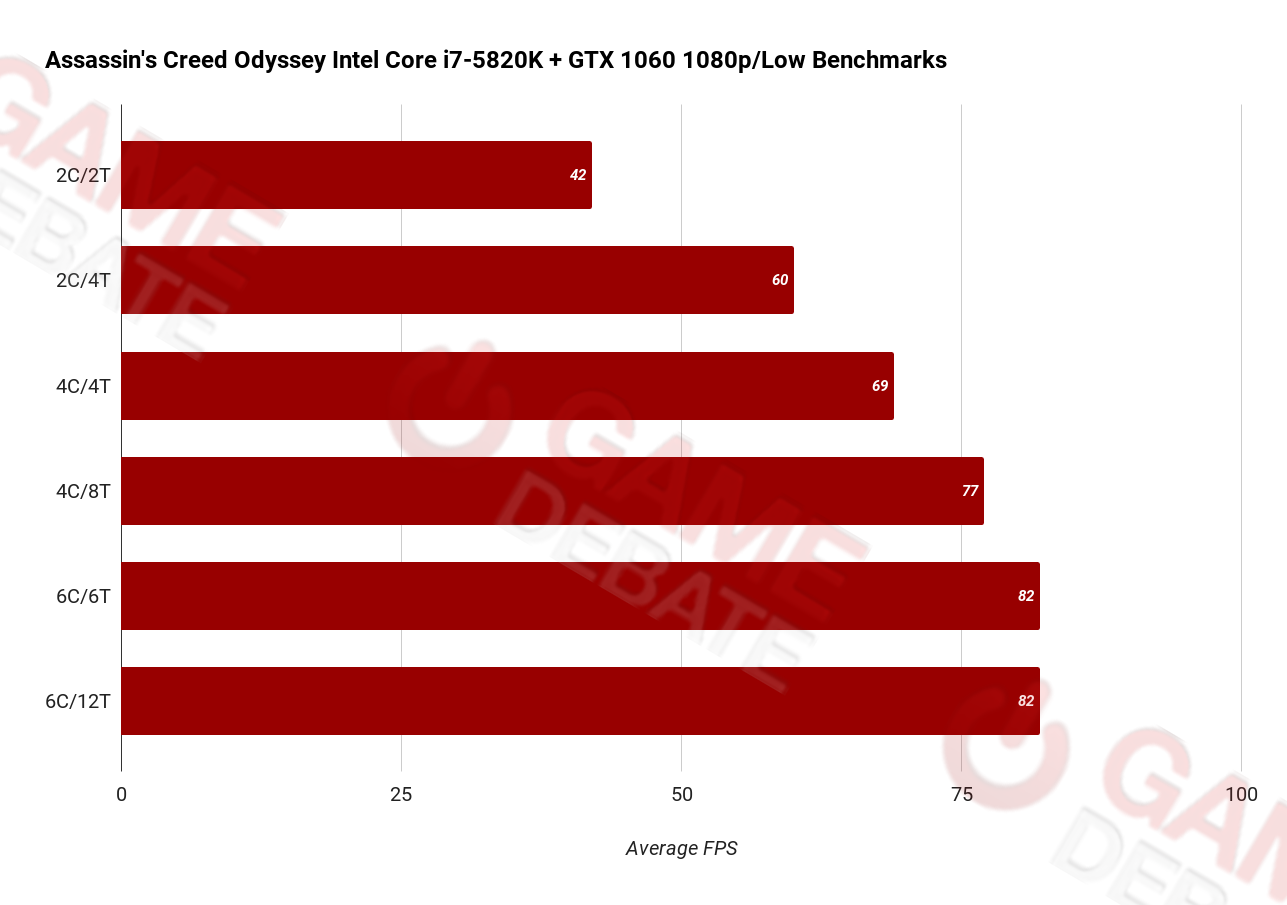 Suffice to say, Assassin's Creed Odyssey loves to guzzle CPU resources. Whatever we threw at it, AC Odyssey will chew on down. The 6C/6T benchmark is also a little deceptive. Despite ultimately offering the same average FPS as 6C/12T, the frame rate swings were wild in comparison.

It should also be noted that in several of these benchmark tests, including the 6C/6T test, the lowest frame rate hit was 0 frames per second. This manifests in a second or two of hitching wherein Assassin's Creed Odyssey is unplayable. Only the 6C/6T and 4C/4T tests could be reliably played without the entire game hanging for a couple of seconds. Suffice to say, your CPU is going to be a huge factor in how AC Odyssey runs on your gaming PC.

This leads us to the assumption that Assassin's Creed Odyssey's minimum and recommend processors area little out of whack. The minimum Core i5-2400 is quad-core CPU without multithreading, and we can see this will almost certainly negatively affect performance. Likewise too with the quad-core, multi-threaded Core i7-3770 which is recommended. While this CPU won't prove too detrimental in terms of performance, it may struggle with high frame rates. Our 4C/8T benchmark was one of only two benchmark tests that didn't hit 0fps at any point though, so this CPU should just about do the job.

For those of you who've picked up Assassin's Creed Odyssey already, how are you finding the performance so far? Is your CPU up to the job or are you experience frame rate issues in AC Odyssey? Let us know below!

Shame you guys don't do 1% and 0.1% low FPS too, since average FPS is by all means no indication of smooth experience. From your graph, all you need is 4c4t to get 60FPS, but reality is that that would not be playable at all, I couldn't get Origins to play well on 4c4t, yes average was 60, but 1% low were 6FPS.

Which indicates severe stutter. And experience was absolutely terrible. Which is why I am now on Ryzen 5 2600X. Also 6c6t and 6c12t results are same, because you guys ran in GPU bottleneck. You never use 1070 to test CPU bottleneck, you use 1080Ti or 2080Ti.

Also by testing on low you tested with lower draw distance, meaning CPU was less loaded that it would be for someone playing on high or ultra. And yes one of setting does effect from how far things start popping in, even if not named draw distance.

So it is kind of useless data, and not even real life performance. Since most of people will want to go for more than low. No offense, but I just like things tested far more in depth. Average FPS is as inaccurate as high average salary in countries where officials get paid a ton and majority starves.

Help please:
Does it get boring like origins? I like the landscape, blue seas, and more rpg etc. BUT is it just copy paste content like ac:o go carry this guy out of camp, 1000 treasures/lairs/###CAMPS!!! :D naa im gonna do sidequests. Sends you to clear a camp ahahahha
If its just grind, im skipping

Sry for offtopic but best to ask gd:) after origins im extra careful. i was so hyped for it i literally walked on every street and part of the map in siwa and alexandria. I even dived in diff.parts of the same lake in siwa hahaha then after 20hrs i realized its all campcampcamptreasure... played till the end, but...

Learned my lesson and decided to skip fc5, new mordor, and some….15 games more :D

My fault for "drinking" their ads and thinking it was like the witcher.

BTW g4560 users BEWARE! As of now ac odyssey doesnt run on g4560 because lack of avx instructions, i dont know if this will be patched or not. This problem might be with all cpus without avx instruction sets, i personally dont know please some one verify my guess please! If this false i will delete this message.

could we say its well optimized? I know i know that it uses lots of cpu horsepower but hear me out, because few benchmarkers say that even though it makes huge cpu workout it runs pretty smoothly/with minimal stuttering, besides unlike odyssey for me ac origins used to stutter pretty often in big cities with high cpu usage.

I put Origins on my SSD and eliminated stuttering, just a tip except after long sessions.

people would argue that it's not and not just demanding, but I'd say it'll probably be decent. as far as I know, it's on the same engine as origins, so I don't think performance will be worse.

I wonder if 8 cores would make a difference. Can anyone with a 8 core cpu run a bench?
I also wonder if AMD cpu's would behave in the same way.
If more cores are becoming a thing then might be worth it going for the cheaper AMD variants.

6C/12T to get best performance is a bit too high and a bit too unoptimized.

Probably 8C/16T is best performance (AMD Ryzen 7) ... idk why they only tested this Intel CPU, its ridiculous

Why? Arn't games allowed to take advantage of the newer cpu's? Should they forever stuck to be running on 4 core cpu's?

nothing wrong with 4 core cpus, as long as they optimize their games as they should..

I want to believe!

So a good way to avoid CPU bottleneck is to increase settings to ultra so that GPU can do most of the job?

Can't avoid it, but you can alleviate it a bit by upping the settings and using Nvidia DSR since you are on 1080p so you get less frames which is less work for the cpu to catch up. Could also cap the framerate to 60 which is what I do when our cpu is struggling.

Wow you really have a monster GPU with that CPU congrats that definately takes courage xD.

My GTX 780 suddenly died and I chose to replace it with a 1080 (in queue to step-up to a 2080) because it was cheaper than upgrading my cpu, mobo, and RAM like I planned to. Seeing as how things turned out, I can't go through with my original plan until next year. With Zen 2 probably going to be released before summer, it kind of worked out as I was gonna get a 2700x originally but now I can reap any improvements from Zen 2.

Now if only I had better gpu :(

Just a little one, but i recommend to save arounf 600-800 bucks to buy a whole PC upgrade.

If im gonna build a new one its gonna be a ryzen build but with mobo, ram, new psu and possibly an ssd i dont think ill have any left for a gpu lol, so ill just get by with a 2nd gen until i get more money

Great graphs Jon, loving the inclusion of scores with hyper threading disabled this time.
I guess the i7-3770 will be able to max it out as it turbo's higher than the 3.3GHz stock clock of that 5820k.

clockc speed is not everything. The 5820k kills the 3770 in every way. It is a vastly superior cpu regardless of clock speeds