Battlefield V's Launch is so Complex it Needs its Own Chart, Play Up to 11 Days Early on PC

If ever you wanted proof that launch schedules for AAA titles are getting out of hand, look no further than Battlefield V. DICE’s online-focused shooter has such a complex launch schedule that a chart has had to be published showing when and where you can actually get your hands on Battlefield V.

Battlefield V is out on November 20th, but depending on how much money you drop down and which platform you’re playing on, you can potentially play BFV up to 11 days before its launch.

Pony up £80 for the Deluxe Edition and you can hop into Battlefield 5 five days early on November 15th. This option is available for PC, Xbox One and PC.

Subscribe to Origin Access on Xbox One or Origin Acces Basic on PC and you can play for a total of 10 hours from November 9th, 11 days before launch.

Subscribe to Origin Access Premier on PC and you fully unlock Battlefield V on November 9th. This option is exclusive to PC. 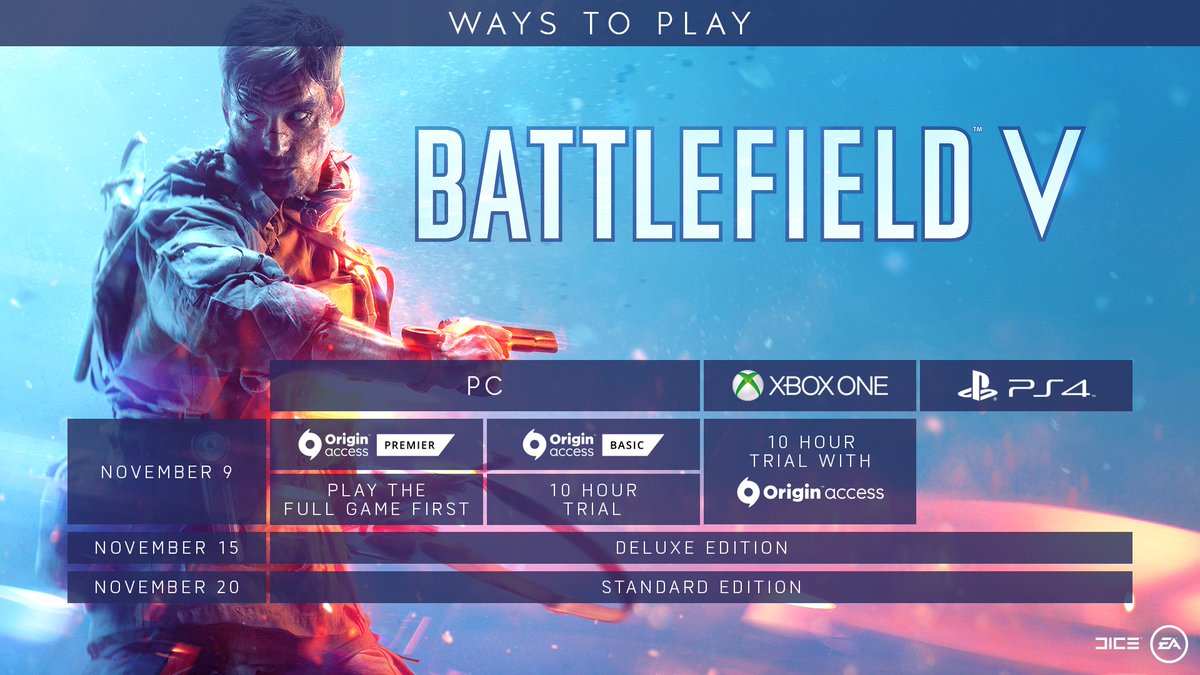 This is all nothing new of course. Square Enix locked three days early access behind the ‘Croft Edition’ of Shadow of the Tomb Raider. All EA games are available a week early thanks to EA Access. Microsoft bundles in three-day early access with the Ultimate Editions of the likes of Forza Horizon 4, Gears of War 4, etc. Ubisoft got in on the action with the Assassin’s Creed Odyssey - Ultimate Edition unlocking three days early. The basic gist of all these schemes is paying more for the privilege of playing early. The game is finished, or at least it should be, but it’s being deliberately held back in order to tempt in those feeling impatient. As they say, fools and their cash are easily parted.

Typically though, these early access programmes are for 2 or 3 days early access, but EA really is going the whole hog with Battlefield V. Some folks will have played Battlefield V for almost two weeks before the Standard Edition. Two weeks to master the maps and gather the unlocks, ready to wreak carnage on the newbies. It’s all a little bit gross, honestly, but fans are clearly paying for it because AAA publishers keep pushing the boundaries and they evidently haven’t found a limited just yet.

What are your thoughts on this growing trend, is it time for a push-back? Have you ever paid more to play a game early? Is this just a backdoor method to eventually jack up prices permanently? Let us know!

To quote the great philosopher of our time, P. Dude: Man...what these game developers won't do for a buck...

lol i thought this game was already released as a flop

Is someone still waiting for this???

so why did you ask to begin with?

It's very on-trend to hate Battlefield V at the moment. People just like hitching a ride on the bandwagon. I personally wouldn't click on an article and read it if it was about something I had no interest in but whatever floats people's boats.

EA is a joke

Okay EA , We are all understand you like money very much but when you try too hard to the point that you actually confused yourself with your own plan. It's time to stop. It's time to get simple "I Bake a bread and you pay for it" plan.

"We do not discriminate between high-paying vs low-paying customers - everybody gets screwed!"
I like this moto! Everyone is welcome!