Just Cause 4 PC Performance Breakdown And Most Important Graphics Options

Welcome back Rico, it's time for a whole lot more physics-based open-world sandbox mayhem with Just Cause 4. Set on the giant island of Solis, complete with four distinct biomes, Just Cause 4 is comfortably the most diverse game yet in the series. Running on the new Apex game engine, it's a bold step forward for Avalanche Studios and means Just Cause 4 is currently the 6th most demanding game in the world according to our new Most Demanding Games feature.

Performance is going to be crucial then, squeezing out every last possible frame while playing Just Cause 4. With any luck, this JC4 PC performance guide can help you hit the sweet spot between graphics and performance.

Using the chart below you can find out just how demanding each graphics option is in Just Cause 4, demonstrating the percentage drop in frame rates when turning the graphics setting from Low to Ultra. Together with this, we've given priority scores based on how important we believe it is to enable these graphics options for the optimum PC gaming experience with JC4.

For the benchmark results below we used a GeForce GTX 1060 6GB, an Intel Core i7-5820K processor, and 16GB DDR4 memory. I ran through the same segment of an early area multiple times and took average frame rates.

The further right the bar goes, the more demanding the graphics option is. In the case of a bar going left of zero, such as Motion Blur in the Just Cause 4 performance chart below, then this indicates that enabling this graphics option actually improves frame rates. 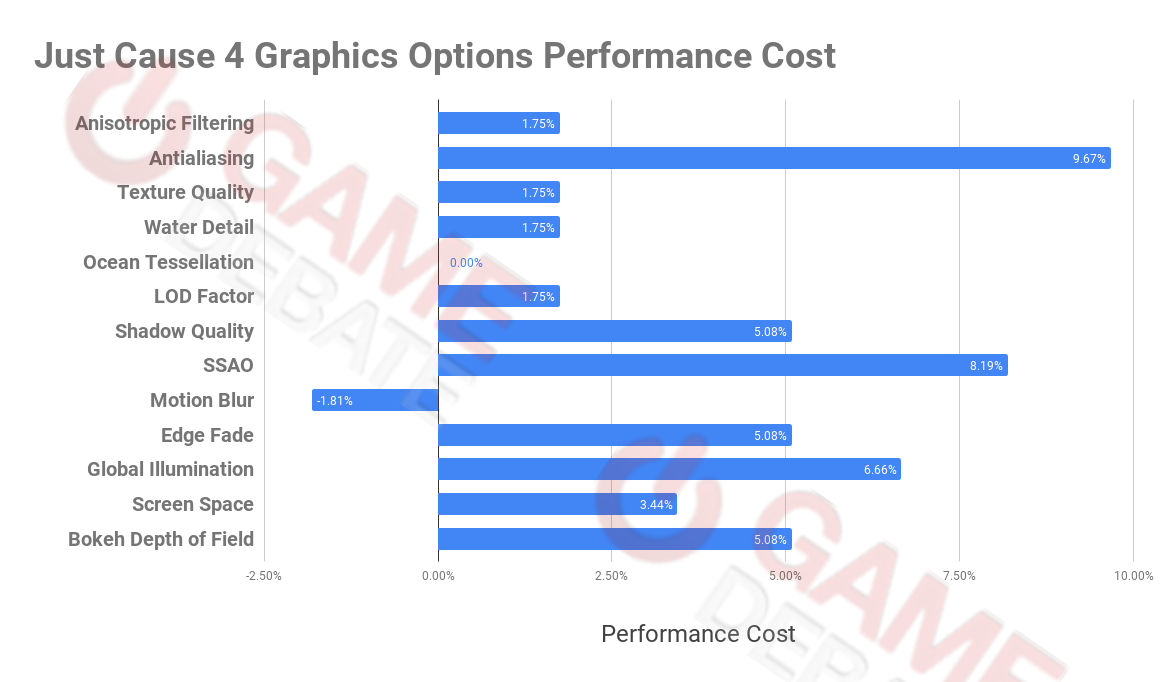 Having done a fair few performance analyses lately, the demands of Just Cause 4's PC graphics options actually make for a fairly flat graph. Whilst antialiasing is certainly the most demanding video setting available in JC4, it still doesn't even cause a 10% hit to frame rates. Ultimately it means there's sadly no single magic graphics setting you can disable for an instant large framerate boost in Just Cause 4, with most causing a 5% or less dip in frames per second. The immediate ones that spring to mind though are Edge Gade and Bokeh DoF, both of which could be disabled for an instant 10% FPS boost.

There are just two types of antialiasing to be found in Just Cause 4 - FXAA and Temporal AA. Both are absolutely terrible, some of the worst implementation of AA I've ever seen with notable artefacting and shimmer effects. FXAA is probably the most preferable of the AA options on offer, but the ultimate solution is to play at, or downsample from, a higher resolution.

Affects both the level of detail and the quality of reflections in bodies of water. We'd recommend you get this up as high as you can get, not only because it looks terrible on Low but because Just Cause 4 features a lot of the wet stuff.

The main impact of Level of Detail Factor is in terms of draw distance. The higher you set this, the greater the distance at which objects pop-in. Most of the strain will be on your CPU for this one but it will also use GPU resources.

SSAO, or Screen Space Ambient Occlusion, applies to the contact shadows where two objects meet. In Just Cause 4 it can be quite a subtle feature in some scenarios compared to a lot of games, but it does provide an additional layer of depth and realism to the environments. SSAO is typically most prominent on buildings and interiors. However, there is still a significant image quality improvement in open areas too.

A divisive graphics option if ever there were, Motion Blur simulates camera movement. If you are struggling with poor performance this can paper over stuttery frame rates.

It's really quite a subtle graphics feature considering the 5% performance hit, but Edge Fade simply darkens the outer edges of the screen which helps lend a smidgen more crispness and focus to what's on-screen in Just Cause 4. It's a real take-it-or-leave-it setting though, and should be one of the first on the chopping block if you're struggling for performance.

A techy way if saying lighting, Global Illumination simulates the bouncing around of rays of light. It should be said that this is a simulation rather than the exact calculations used by a more expensive option such as real-time ray tracing.

Screen Space Reflections impacts the reflections of objects on water and other shiny surfaces such as metal or glass. Usually, this comes as prohibitively expensive graphics setting, but in Just Cause 4 it only cost us a handful of frames.

Bokeh is a photographic effect design to mimic the blurring of out-of-focus parts of an image. Ultimately we could detect little difference in the final image, so disabling this setting for performance reasons comes highly recommended.

Am i getting this wrong? How can motion blur affect negative performance cost ? :S

i saw a breif gameplay video, i think this game deserves to give it a try

playing atm myself, the graphics is a bit meh for 2018 but the gameplay is fun af