Our bloody Christmas fight to the death rumbles on into the second day. Yesterday, it was the multiplayer FPS showdown as Battlefield V went toe-to-toe with Call of Duty: Black Ops 4. In truth though, looking through the comments it appears as if the inclusion of single-player in BFV may have been what helped swing the vote in its favour. It was ultimately a close-run thing but the sublime Battlefield V came out the winner, dropping a V2 rocket on Call of Duty's BLOP-y face in the process.

Call of Duty is barely in the ground but now it's time for day two, and it's two single-player action adventure heavyweights, both of which showcase Sony's impeccable exclusives this year.

Here we have it, the battle of the PlayStation exclusives. Sony has certainly gone for quality not quantity in 2018, delivering two stellar action-adventure games courtesy of God of War and Spider-Man. Both Kratos and Spidey are a dab hand at beatdowns though, and this God vs Superhero showdown could be one for the ages. Kratos can rip a head off with his bare hands, or lift an 18-ton rock and hurl it into the sky, but will he come a cropper up against Peter Parker's wrist-mounted goo cannons. It all sounds a bit unfair, to be honest, but Spidey's nimbleness could be enough to take down a god. Maybe. Probably not, but maybe. 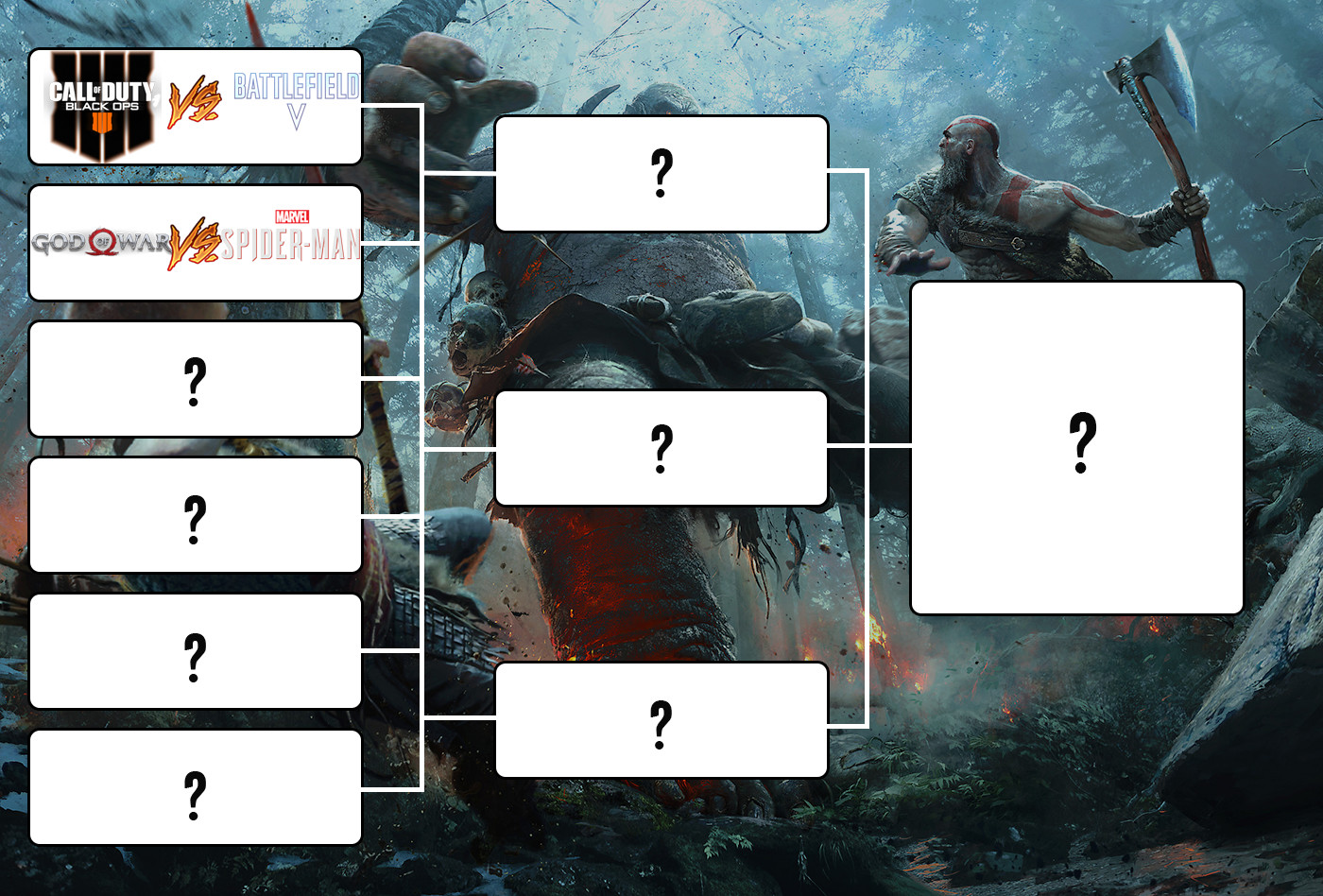 Get voting below for your winner, and remember to check back tomorrow for Day Three of the 12 Games of Christmas, where two more titles will battle it out to earn a place in the next round. The winner of today's competition will face Battlefield V in the semi-final on 16th December!

i wounder if any one will vote for spider man here

I voted . if i still had my PS4 i would have swinged the hole NY area , because that city is beautiful

I think it's better that two PS4 games are against each other. Otherwise the majority would vote for the non-PS game, because the have only played that.

Damn this is cruel.. pitting these two against one another... Anyway, I think I'll go with Spiderman in this one. If nothing more than to applaud the sheer efforts of Insomniac Studios. While GoW in itself was a complete overhaul there was still hope that Santa Monica would pull it off. But I remember Spiderman having lots of doubters from early on. Gamers weren't too optimistic that any studio could make a Spiderman game that could live up to their expectations, let alone Insomniac - a studio with a stellar record of it's own. But they did it. They f*ckin did it! I felt incredibly happy and proud of the guys over at Insomniac for shattering every barrier of doubt and delivering an outstanding game. The reviews, the sales, the word of mouth - everything proved this was a game you should definitely purchase if you have a PS4. Sony keeps hitting it out of the park with their exclusives, no doubt about it. So Spiderman it is! :)

I voted for GoW, but Insomniac did an amazing job and it would be a shame if they didn't get at least some votes.

To me, Spider-Man was more like a casual, fun game, while God of War managed to be something more. I also got a bit bored by the end of Spider-Man, while I did almost everything in GoW (which is a lengthier game overall).

useless competition, RDR2 already won, is written in the stars.

Own them both, played only a little of both. I have to go with God of War. I love the Norse theme to the game. Chris Judge does an amazing job as Kratos. It's just a damn fine game. I won't blame anyone for picking Spider-man, but God of War is the clear choice for me.

i played both serie except the thos two last games but while i played spiderman just for sake of playing something i really enjoyed god of war serie. so my vote goes to GoW even tho they completly changed it i am 99% sure that i would enjoy it more

God of war for me, cant stand spiderman

vote for the top one (literally, the one above the other!)

Spider-man is a great game but i prefer god of war.

Evil bastards, GoW wins easy for me, but damn both games are epic.

Why are you gonna make us choose between these two. You monsters.