Now don’t get carried away with yourselves but Valve is gradually getting the old team back together. Half-Life 2 Episode 1 and Episode 2 writer Erik Wolpaw is now allegedly back at Valve having originally left in February 2017 to write for Psychonauts 2.

A mobile screencap of an email conversation with Gabe Newell appears to confirm as much. In the email, Newell is asked “Erik Wolpaw back at Valve?”, to which he succinctly replies “He’s back.” 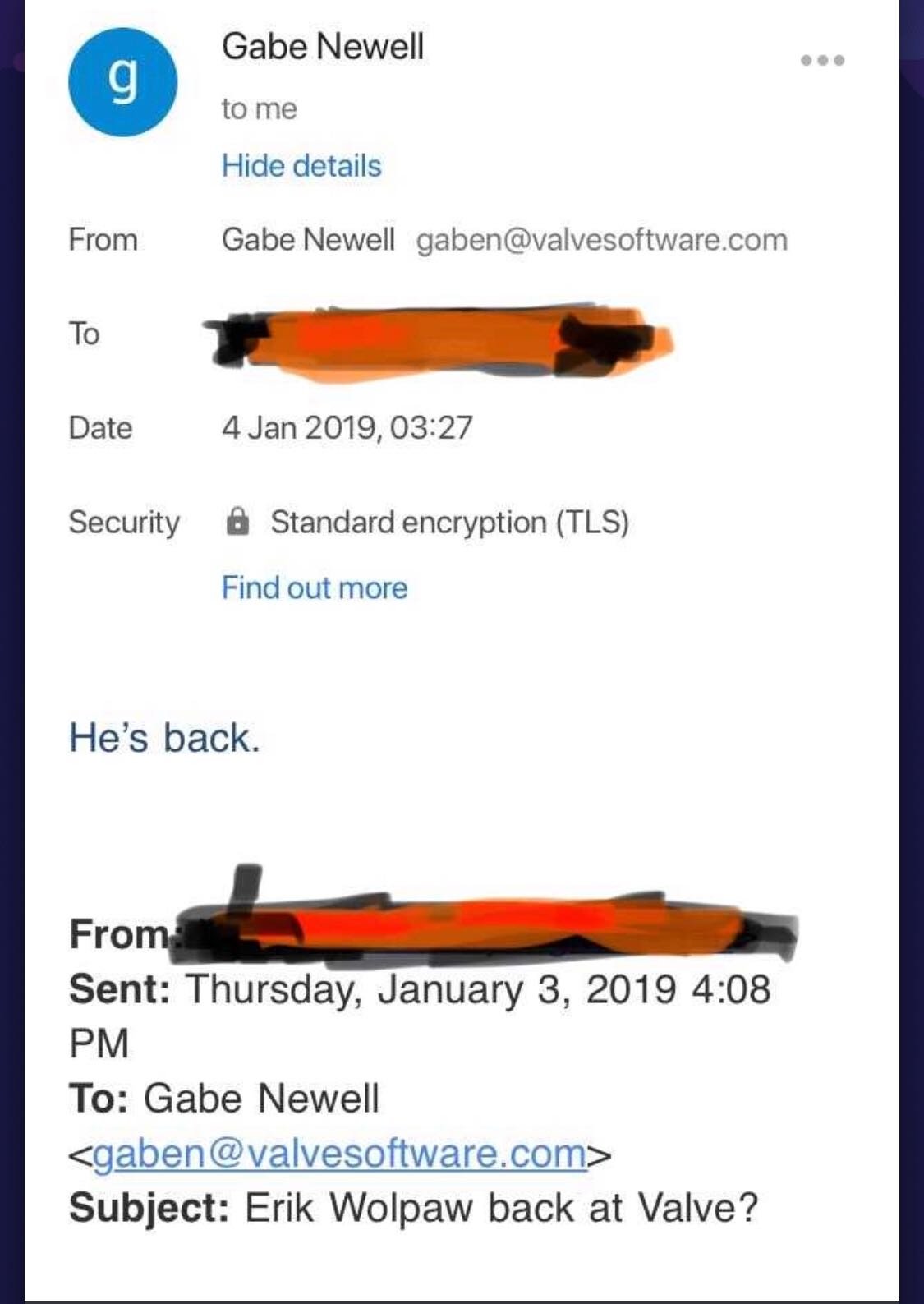 On its own, there’s the whiff of bullshit to this one, but Shacknews spotted that Erik Wolpaw’s name actually appears in the credits for Artifact, indicating he may even have been back at Valve for some time.

But why is all this potentially exciting? Well, these are some strong indications that Valve is getting back into story-based games. Fellow Valve writer Jay Pinkerton, who co-wrote Portal 2 with Wolpaw, also returned to Valve in July 2018 having departed in 2017.

Of Valve’s chief writers still in work, this leaves just Chet Faliszek yet to return. There’s a core of Valve’s writing team that is now back and hopefully working on games though, which spells potentially positive news for the future.

The obvious question at this point would be what could they be working on. There are a handful of obvious wants, although we wouldn’t be surprised to see Valve attempt some sort of story-mode for Artifact in order to rescue it from the doldrums. Aside from this, Jon’s prediction of Half-life VR could have a shred of truth to it. We doubt it, but he’s got to be right sometime.

Half Life VR would be dope, but 1 mistake and they'll never hear the end of it.

I'd kill for a new Portal or good HL. I'm still feared that HLVR will be more of a half assed techdemo disguised as a game to sell their upcoming new VR headset.

What if, somehow, they introduce time-travel and Freeman has to revise the choices he did in Half-Life 1 to avoid the whole Black Mesa incident ? imo, it would make a great story, so many possibilities !

If you check Valve's official website, they claim they claim a "couple of games have been announced" such as Artifact and Valley of the Gods "while others still remain top secret". I don't think it's a stretch to say Valve will say something about their new lineup, at some point soon, especially since they seem to be under attack on multiple fronts atm.

Not atm, but for many many years in which nothing has happened. They had tons of games in developement that just died at some point because of valve's structure. If the people involved lose interest in a project or hit a wall they don't wanna bother to overcome, the project can just die as devs leave it behind.