Hitman Absolution was a divisive, far more linear take on Hitman that debuted in 2012 for PS3, X360 and, of course, PC. Hitman: Blood Money is much older. Hitman 4 in all but name, Blood Money originally launched in 2006 for PC, PS2, and Xbox, and is pretty widely considered to one of the best in the Hitman series thanks to a cracking story and one of the most iconic hits. 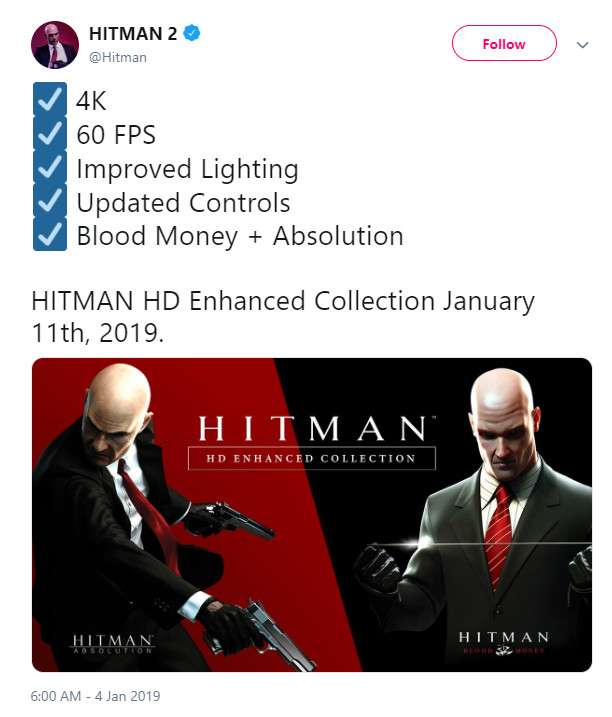 If the presence of Hitman: Blood Money has you raising a single suspicious brow, that’ll be because it’s already been included in the Hitman HD Trilogy for previous-gen consoles. Somehow this classic has managed to wrangle its way into two separate Hitman collections.

IO Interactive has yet to announce platforms for the remastered Hitman collection, although it seems safe to assume a PC version probably isn’t on the cards. It doesn’t sound as if a huge deal is changing outside of higher resolution support, a feat already possibly on PC with the current versions of Absolution and Blood Money.

Hitman HD Enhanced Collection will be available to download from January 11th.

Just shut up and take my money ;D

but why from start from those??
is it not better to enhance the most outdated graphicaly ones which are agent 47 and silent assassin

Probably because they are a bit too old. :/

is that not the point of Remasters and Remakes?

I hope pc is on that list, if it means better graphics and controls im all for it, even though they could just patch the old games