It is understood that the upcoming Total War Three Kingdoms will be using the latest version of the Total War Game Engine 3. This has been used by Total War games since Total War Empire, which released in August 2007. Although back then the TW Game Engine 3 was a 32-bit version, it didnt get updated until Total War Warhammer’s release in 2016. This engine also makes use of Creative Assembly's graphics module, Warscape. As usual, we expect this engine to be improved in TW 3 Kingdoms by CA, as it has been for each game it has been used prior to the new TW3K.

The 64-bit version of the graphics engine was released for the TW: Warhammer games. At this point, Total Warhammer 2016's frame rates became much more bottlenecked by GPU performance, as we discovered in our Total War: Warhammer frame rate benchmark comparison.

This move to the 64-bit Game Engine 3 improved the end of turn speed, which is still pretty slow at the best of times, due to the number of factions all having to be processed. Especially when the TW Warhammer 2 Mortal Empires came along, because that pushed the faction number up to 120, all of which have to have their AI actions processed at every turn end. This 64bit improvement is also utilised to significantly help with managing the huge number of army units we see on the battle screens at any one time. Although Total War has long been able to deliver large numbers of army units and it's definitely about time we got to see more battle units on-screen.

When will Creative Assembly change its Total War game engine, how long will Total War use the current game engine?

Creative Assembly developers currently use Total War Game Engine 3 64-bit for Total War 3 Kingdoms, which is the same engine as the one used in Total War Warhammer 2. They continually update their modular Game Engine 3 between games and will likely continue to use this same game engine for many more Total War games.

CA have already modified Game Engine 3 to accommodate tech improvements, like switching it to DX12 compatibility and upgrading it from 32-bit to 64-bit architecture.

We have seen some situations where these updates to the universal game engine have negatively impacted people's game retrospectively. In November 2018, the TW Warhammer 2 DLC, Curse of the Vampire Coast was released. Anyone who had TW 2 on their PC was then given an update to their copy of the core game to include the DLC data, regardless of whether they own the DLC. That way, when people played TW Warhammer 2 they would have the latest build of the game and would see the new faction and units in the game but without being able to control them, unless they bought the new DLC.

Felix was using the relatively powerful GTX 1070 and getting solid FPS in TW Warhammer 2, normally around 45-55FPS at 1440p. But following the Curse DLC patch, Total Warhammer ran at around 10-20FPS on the normally less intense campaign screen, and would crash to desktop after the first full turn.

Despite updating the Nvidia GTX 1070 graphics card drivers, reinstalling the whole TW Warhammer 2 game, removing all game mods and DLC, the game continued to crash and endure frame rate slow-down. After much exploration and a few months of not playing TW 2, it turned out you could side step this Curse of the Vampire Coast FPS slow down and crash bug by loading the game in DX11, instead of the normally more favourable DX12 version of the game.

So Felix says, if you want to fix your version of Total Warhammer 2 frame rate issue then try disabling the Direct X 12 version of the game and run it in Direct x 11. there is a tick box on the game launcher.

Our hope is these focused, seemingly graphics card-specific issues do not reappear in the new 3 Kingdoms title because it uses the same game engine as TW:W2. Not being able to enjoy the new Total War game in Direct X 12, as standard, for a number of random graphics card owners, would certainly put off potential pre-orders, including our very own Felix. He's now waiting to see how the release of TW 3K goes before committing.

Total War 3 Kingdoms is, as always, a turn-based strategy game zooming into real-time tactical battles beginning around 190AD when the mighty Han Dynasty’s was on the verge of collapse. A child emperor had been enthroned and a ruthless Warlord was controlling the empire by proxy.

TW3K releases on 7th March 2019 and we wanted to take a look at predicted FPS for the TW Three Kingdoms game engine seeing as we know it will be using the same engine as Total Warhammer 2.

Bear in mind that when comparing PC hardware to the expected FPS performance, data and game code changes can still happen that can influence these anticipated TW3K frame rates. Things like new drivers released, unexpected hardware performance bottlenecks, or perhaps specific graphics card bugs, like the one listed above. Despite that, we expect our experience and data should put us roughly in the right area in terms of expected frame rates, giving us a guide on how well PC systems can run the new Total War 3 Kingdoms.

Slide your mouse over the graphs - side to side 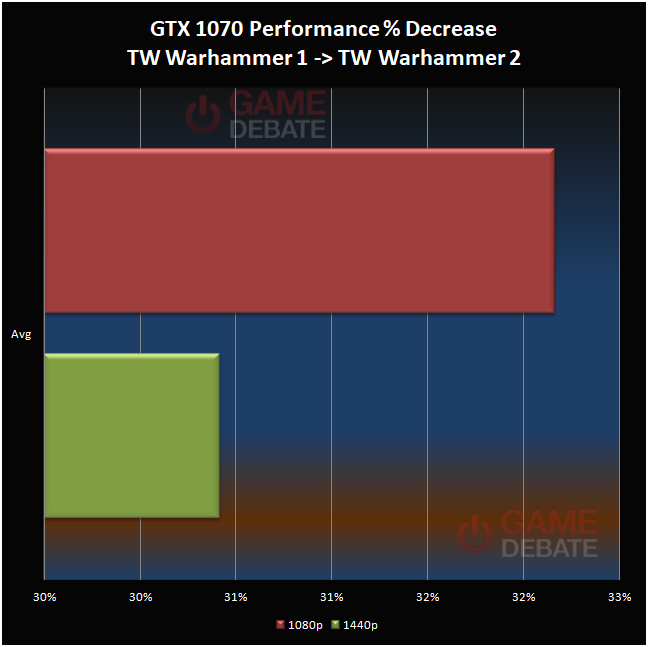 The next chart below is a summary of the other information. It shows us how the frame rate drop between each Total War game looks, whether in campaign or battle mode. Swipe across the image to see the 1440p screen resolution compared to the 1080p 3 kingdoms screen resolution frame rates.

Based on these calculations and speculations here is something for us to chew over and discuss as we have put together our predicted low, high and ultra 3 Kingdoms specs based around the above findings. We will, of course, revisit this article once TW3K releases its official system requirements, but for now lets consider the following...

It should only be a few weeks now until we hear what Creative Assembly have for us in the way of PC hardware requirements for the China based TW Romance of the 3 Kingdoms style title. Until then I look forward to your discussions below, and as always we welcome any insights you may have for us dear GD gamers.

I don't think it'll be such a jump, this is a jump I expect to be from wh2 to wh3, but not for a game that is basically just there to fill the hole in between that will almost certainly be poorly optimized.

I should really consider playing a Total War game someday. Too bad my gaming backlog is OVER 9000!!!!!! miles long.

From graphics it seems like TW: Three Kingdoms will be a poorly optimized game.

All I saw was Total War 3 in the headline, and I thought Total War Warhammer 3 had finally been announced.