It's been six long years but the third game in the Metro series is almost upon us. Metro Exodus is out on February 15th and once again uses the proprietary 4A Engine, which is the game engine that powers a top-tier visual experience that will truly shine on PC.

An important thing to consider is that in the upcoming Metro 3 we leave the confines of the Moscow underground stations for an epic journey across Russia, via a train. This means far fewer claustrophobic tunnels and more massive, open-ended environments to explore and probably far more resource hungry requirements put upon our PC hardware. The footage we have seen so far of Metro Exodus looks fantastic and we could have a PC gaming powerhouse on our hands.

Unlike our previous performance predictions, drawing an actual throughline between Metro 2033, Metro: Last Light and now Metro: Exodus is almost impossible. While all three games used the 4A Engine, it’s been six years since Last Light and its reported frame rates, so they feel like they will have little bearing on what we can expect from next months Metro Exodus FPS results.

Yes, Metro Exodus uses the same proprietary 4A Engine as the other Metro games but its capabilities are going to be practically unrecognisable thanks to the inexorable march of time. It would be a bit like judging a game’s system requirements based purely on the fact it uses Unreal Engine 4. The recommended spec graphics cards for the first Unreal Engine 4 game (Daylight) were a GeForce GT 730 or a Radeon HD 7570. Mortal Kombat 11 uses the same engine five years later and recommends a GeForce GTX 1060 or Radeon RX 570. There really are no comparisons to be made based on the 4A Engine alone after such a huge gap between games.

Metro Exodus Will Be a Graphical Powerhouse

What we can do though is look at how 4A Games attempted to push gaming tech with Metro 2033 in 2010 and Metro: Last Light in 2013, and how the performance and demands of these games compared to other AAA games of the period. In many ways, the Metro games are the last of a dying breed of graphics-pushing behemoths designed primarily for PC, and while Metro Exodus is still coming to PS4 and Xbox One, it does at least appear 4A Games is trying to push the envelope with Metro 3’s PC visuals.

One great example of 4A Games sitting at the forefront of gaming tech is that Metro Exodus was one of the first games announced with DXR raytracing support. Real-time raytracing support isn’t confirmed for Metro Exodus’s launch just yet, but if it is included then it’ll only be the second game in existence with official RTX support (after last year’s Battlefield V).

Our first step then is to determine how demanding the Metro games are compared to other PC games. For the chart below we’ve used an algorithm based upon the recommended system requirements for Metro 2033, Metro: Last Light and plenty of other games to show just how the Metro series stacks up. 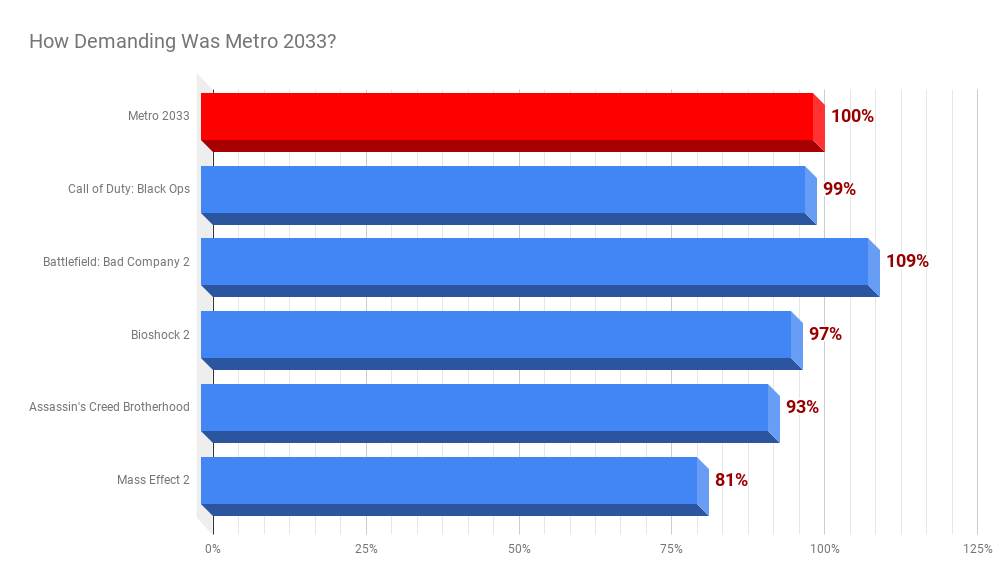 Fast forward to 2013 and we see the absolute peak of Call of Duty and Battlefield’s demands. Battlefield 4 was far, far more demanding than your average AAA game, and Call of Duty: Ghosts followed suit thanks to its next-gen version (PS4 and Xbox One launch). Metro: Last Light slipped a little way behind these absolute blockbusters, but it pulled way ahead of 2013’s Assassin’s Creed, Bioshock and Tomb Raider outings. Metro: Last Light was comfortably the most demanding single-player-only game of 2013. It’s the reason why it’s still widely used in benchmark tests to this day. 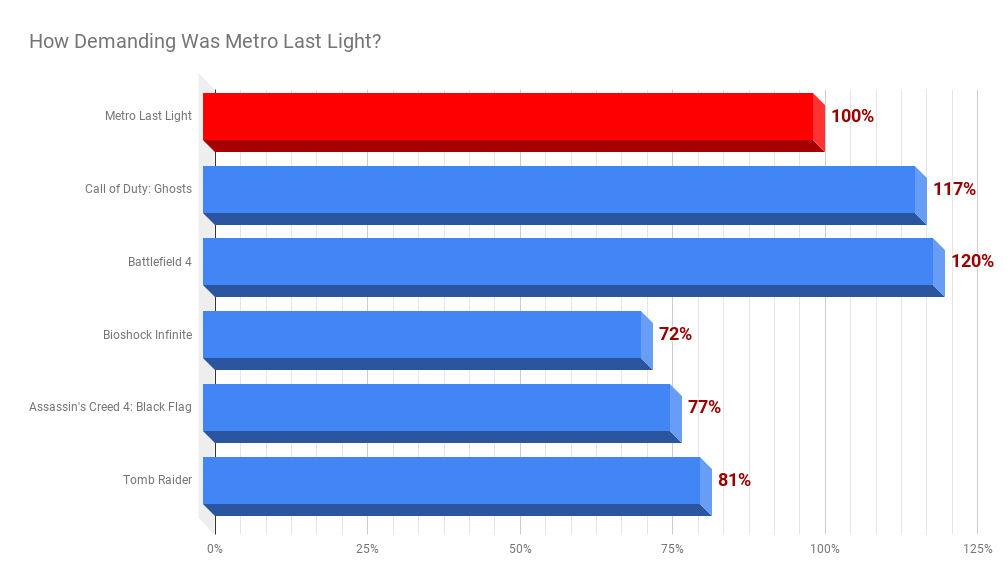 Using this info we can begin to build a good picture of where Metro Exodus will lie. Metro Exodus will probably be the most demanding single-player game in existence. It may even have the highest recommended specs full stop. Call of Duty is languishing behind these days with its aging visuals, while Battlefield V runs like an absolute dream thanks to DICE’s great work on the Frostbite engine.

If we take a look at the 100 Most Demanding Games List for a moment, it quickly becomes obvious that, aside from VR and unoptimised Early Access guff, Metro Exodus has a good shot at claiming the top spot. For those who love seeing what gaming PCs are truly capable of, Metro Exodus should become a great benchmark standard.

Hitman 2 is currently the most demanding AAA game on PC based upon its recommended system requirements, and we expect Metro Exodus should top it comfortably. Hitman 2’s are a bit out of whack, in truth, and you don’t need anywhere near the recommended specs to have a quality experience.

The shift to more open levels in Metro EXodus should mean a sizeable increase to the CPU specs. Hitman 2 was similarly demanding on the CPU but we're expecting Metro Exodus to have processor specs that align roughly with Battlefield V. There's going to be huge environments stretching off for miles, combined with tons of enemies roaming around.

On the graphics card front, it would be surprising if you could play Metro Exodus with anything less than a 2GB DX11 video card. We reckon to hit Ultra at 1080p you're going to want at least a GeForce GTX 1070 or Radeon RX Vega 56. Turn it down to High and it should hopefully suit the GTX 1060 and Radeon RX 580.

Assuming these are the rough system requirements we expect Metro Exodus to have, we can then extrapolate predicted framerates for Metro 3 at 1080p and 4K resolutions. These are estimates rather than an exact science, but using data from current AAA titles, combined with how demanding we expect Metro Exodus to be, these are the sort of FPS results in Metro: Exodus we're expecting.

This chart outlines the expected frame rates at 1080p resolution in Metro Exodus. We've taken the GTX 1070 as the benchmark and calculated the data from there. These predictions are based on playing Metro 3 with the Ultra graphics preset. 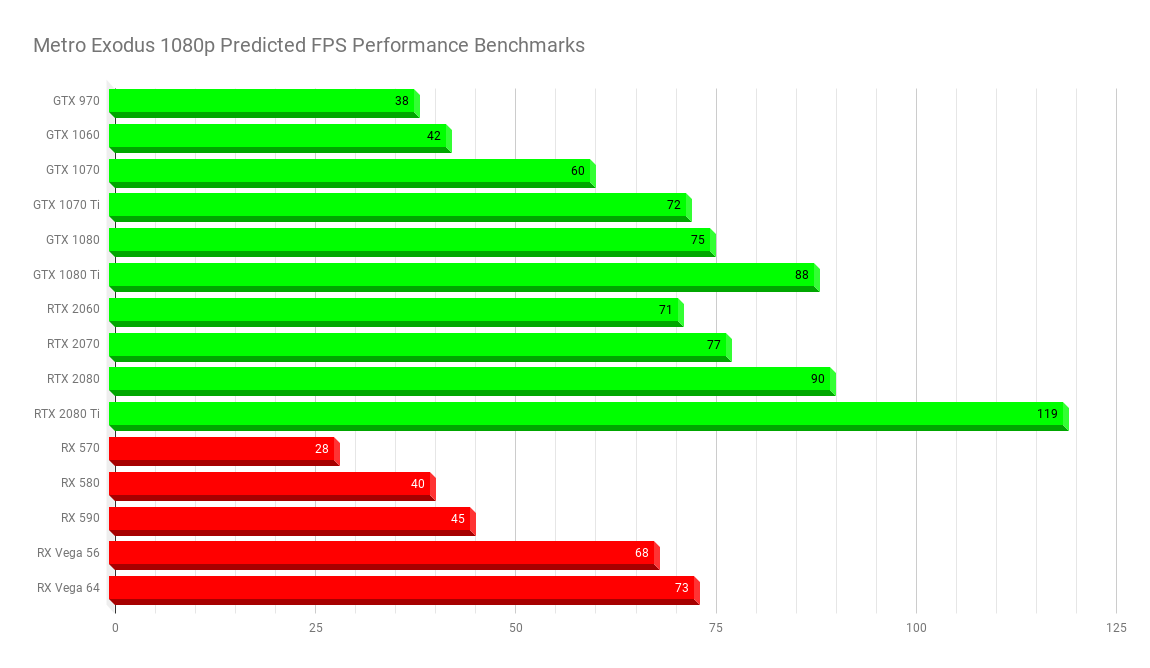 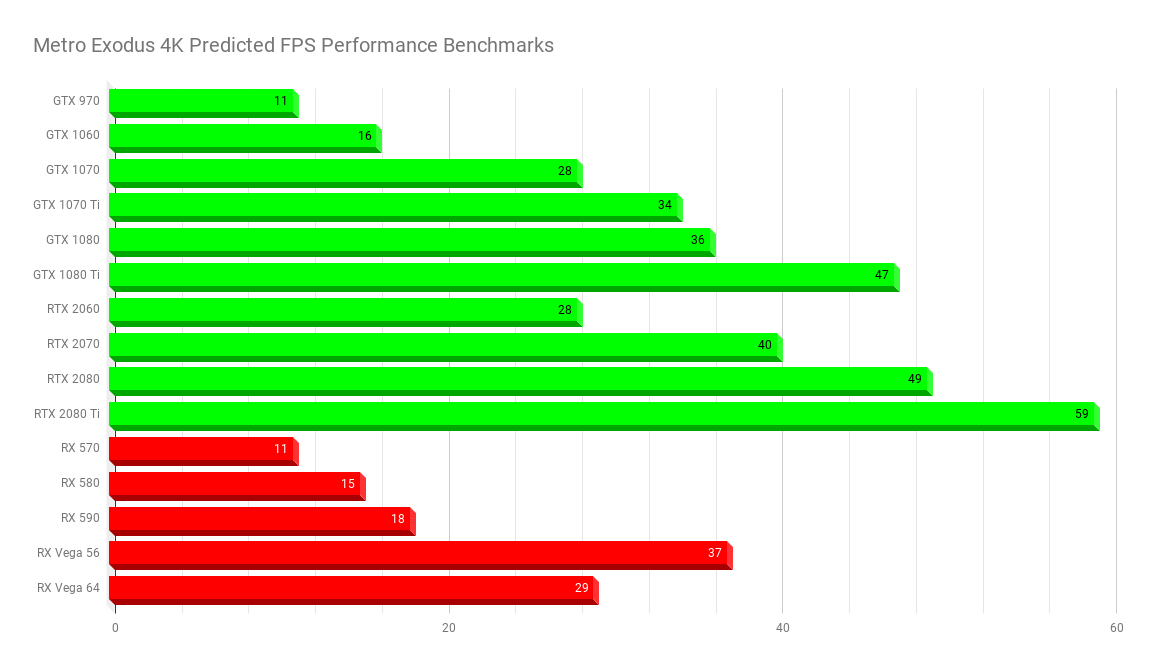 With any luck we should hear some official news on Metro Exodus's PC system requirements very soon indeed. We'll come back to this article just as soon as we know more and see just what affect they could have on expected Metro 3 FPS results.

Metro Exodus is coming to PC on February 15th.

"These graphics card standards are too damn high" - RX 480

Nice graphs ! Specially the Metro 2033 and Last Light comparisons with other games. How do we do that comparison though ?
By comparing the recommended GPUs against each other ?

Thanks! There's not actually a feature for that on the front-end yet but it uses all the specs and it's the same as what's used to calculate the 100 Most Demanding Games list. I'll raise the idea of a game compare that works like GPU compare as that actually sounds pretty neat :)

Game compare would be awsome :)

For me it would be good even on medium

for me it would be low

I hope this makes my aging graphics card scream.

what is this, the final push to clear out all left-over GTX 10XX stock, or to push even further the damn RTX crap....
These requirements are definitely too high, i'm pretty sure it will be a lot better optimized

Well, it says that the graphical settings are set to ultra. If you can run this game at high settings and on 1080p. You could still pretty much enjoy the game.

yes indeed, sometimes ultra includes additional unnecessary effects like qua-druple AA & etc...
I'm pretty sure the likes of RX470 - GTX1060 - to RX590 (all VRAM options), including GTX 1050 ti, will be enough to run the game at high graphical fidelity with 50+ fps, even if a bit of tweaking would be needed