It’s right up there on the list of pretty obvious things but CD Projekt RED has firmly denied that there’s any chance whatsoever of Cyberpunk 2077 becoming an Epic Games Store exclusive.

“Please please please don't make this game an epic store exclusive,” pleaded a fan on Twitter, to which the official Cyberpunk Twitter account replied “Yeaaaaaaaaah.... Pass on that.” 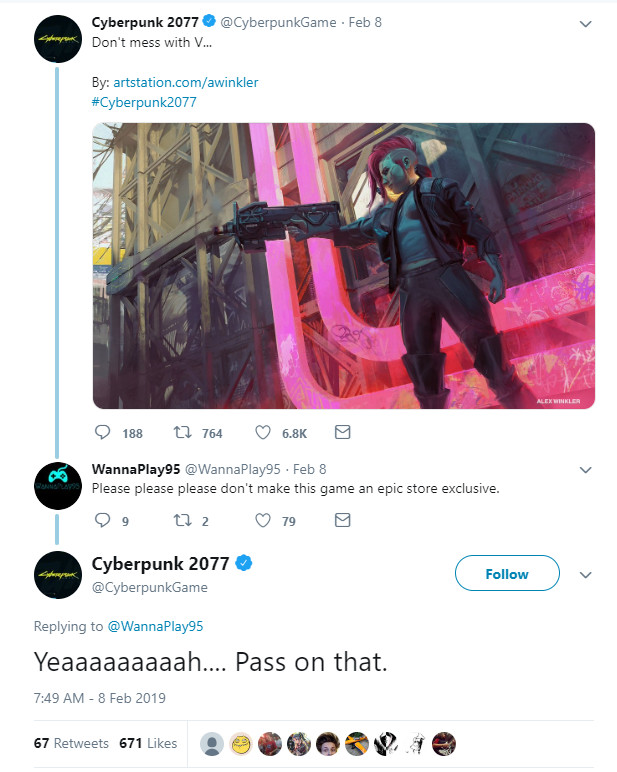 A tiny bit of confusion was thrown into the mix when TweakTown wrote a story claiming Cyberpunk won’t be launching at all on the Epic Store, a move which CD Projekt RED has swiftly denied. “Please check our tweet again,” read their response. “We simply said it won‘t be an exclusive (and this won‘t change) - we have not confirmed any other details as of now.”

Considering CD Projekt RED’s position on DRM and openness, this should all come as little surprise. CDPR owns its own storefront in the form of GOG.com, for starters, and after setting its stall out with the ‘FCKDRM’ initiative it would be a tricky PR position to backtrack and make Cyberpunk exclusively available through the Epic Store.

Having said all that, it’s not totally outside the realm of possibility that Cyberpunk 2077 is exclusive, but actually to the GOG store instead. We saw CDPR attempt this with Thronebreaker: The Witcher Tales, although poor sales/lack of interest saw it come to Steam fairly swiftly. Cyberpunk 2077 wouldn’t have this problem and could potentially be a GOG exclusive, although it’s more likely it’s going to launch in each and every store that’ll have it.

Where are you hoping to buy Cyberpunk?

great news from the greatest devs ever . thanks for this awesome news CDPR &#603

What if we could purchase CyberPunk 2077 from within a pirated copy of The Witcher 3? From any of the many merchants in game.

good luck with that

IF buy at all (means, the game reviews won't be really disappointing), GOG for sure

perhaps more than other devs/publishers, but no, not really, I will never forget the downgrade they have done to Witcher 3, it's very likely for similar to happen with such massive open-world game like Cyberpunk

Logical. The game could have looked so much better. Consoles....

GOG all the way

I can't wait to play the hell out of this game

Epic ?? they are nothing, i won't install another launcher

Put it on steam or GOG, just wanna play the thing.

It's like they are one of the few devs/ publishers that are still in touch with their customers. Kudos to them.

I loved their video responses after they were voted the best Developers and TW3 having the Best Environments in the recent Steam awards tho and I'm mildly excited for Cyberpunk (I hope it will be more serious like Deus Ex rather than an over the top action game like GTA.

why would it be epic store exclusive? they have their own shop, gog...

I was about to comment the same thing. It makes no logical sense to ask that question, the answer should be obvious.

How you guys do that? i want to do it to xD.

It's not. I don't have this in my "emoji" list. But I am a tiny bit of a web developer, so it wasn't hard to guess how Jon got his emoji :)

Exactly, if they did it as exclusive, it would be GOG exclusive. GOG is owned by CD Projekt RED, meaning no matter how good terms Epic store offers, GOG can do better. Though I would imagine, if it will be exclusive, it will be timed exclusive to cover biggest sale window, which is first month, if it happens.

Also physical copy will likely be tied to GOG, as was with Witcher 3. At least in my case it was GOG version. Still, personally I don't care, I will likely buy it through GOG, since this way, they get to keep more money than via Steam which will take 30% cut. And both CD Projekt RED and GOG deserve that money.

Steam won't take 30% of Cyperpunk's cut. It's bound to sell a lot, so as a consequence it will take 20%, which is good considering how useful Steam is, both to us and to them.

True, CP will highly likely get to that 20% cut, which Valve was forced to implement. Still, personally I will get it it on GOG, where cut will be lower, since they own it.

Not necessarily, you seem to forget that having a game launcher / shop costs money. For example they also have to pay for payment fees which on average already is like 5%, then they need to host the servers for the game downloads etc. I am pretty sure that their own costs will be at least 10%.

Yeah, but even if it is 10% that is still a way lower than Steam and still lower than Epic. To be fair we can't really know how much it costs to run GOG or Steam or any other store. But I would imagine it is less than 10%, considering that Epic is taking 12% and Discord store is taking only 10%.

The reason why we have so many launchers is Steams approach of 30/70 cut. Apparently it costs a lot less than 30% to run distribution platform and store, which Discord was forced to admit, hence they changed it to 10/90. Also 30/70 is reason we have Origin, uPlay,...

I will buy on Steam, Gog and Physical Copy as I did with The Witcher 3. I want CDProjekt to be the greatest developer/publisher in the world.

I will buy everything from GoG if I could..
But then again I dont really play multiplayer anymore

The message is not clear enough about what is going on behind the scene here. As we know CDPR is being a flagship for GoG & FCKDRM. This sound like EPIC still trying to pull other AAA games off other platforms and CDPR is not playing along.

As long as theres no Denuvo im happy to get from Steam or GOG, prefer GOG though

GOG if at all, I love GOG but I'm not sure yet what to think of the game.

No Steam, no buy, but pirating :P