It's a new year and a new Far Cry, but does Far Cry New Dawn's performance differ all that much from its predecessor? We've put Far Cry New Dawn through a series of benchmark tests to see how performance shapes up, including a video card below its minimum specs, as well as a member of Nvidia's new GeForce RTX family.

Over the weekend we took a look at FC: New Dawn's PC graphics settings, benchmarking which Far Cry: ND graphics options are the most demanding as well as providing examples of the visual differences.

Just as with all Far Cry games, Far Cry New Dawn uses the Dunia Engine. It's the same engine used for Far Cry 5, Far Cry 4 and, well, you get the picture. The Dunia Engine allows for massive landscapes, big explosions, and plenty of physics-based carnage.

Far Cry: New Dawn comes with a built-in benchmark tool. Unlike a lot of benchmark tools, this one is actually very representative of actual gameplay so we used this as the basis for our tests.

For our first FC: New Dawn benchmarks, we used an AMD Radeon R9 370 equipped with 2GB video memory. It’s backed up by 16GB DDR4 memory and an Intel Core i7-5820K CPU. This video card is of interest because it actually comes in below the minimum specs for Far Cry New Dawn, which suggest a Radeon R9 270X. There's not much in it but it is weaker than the minimum spec. 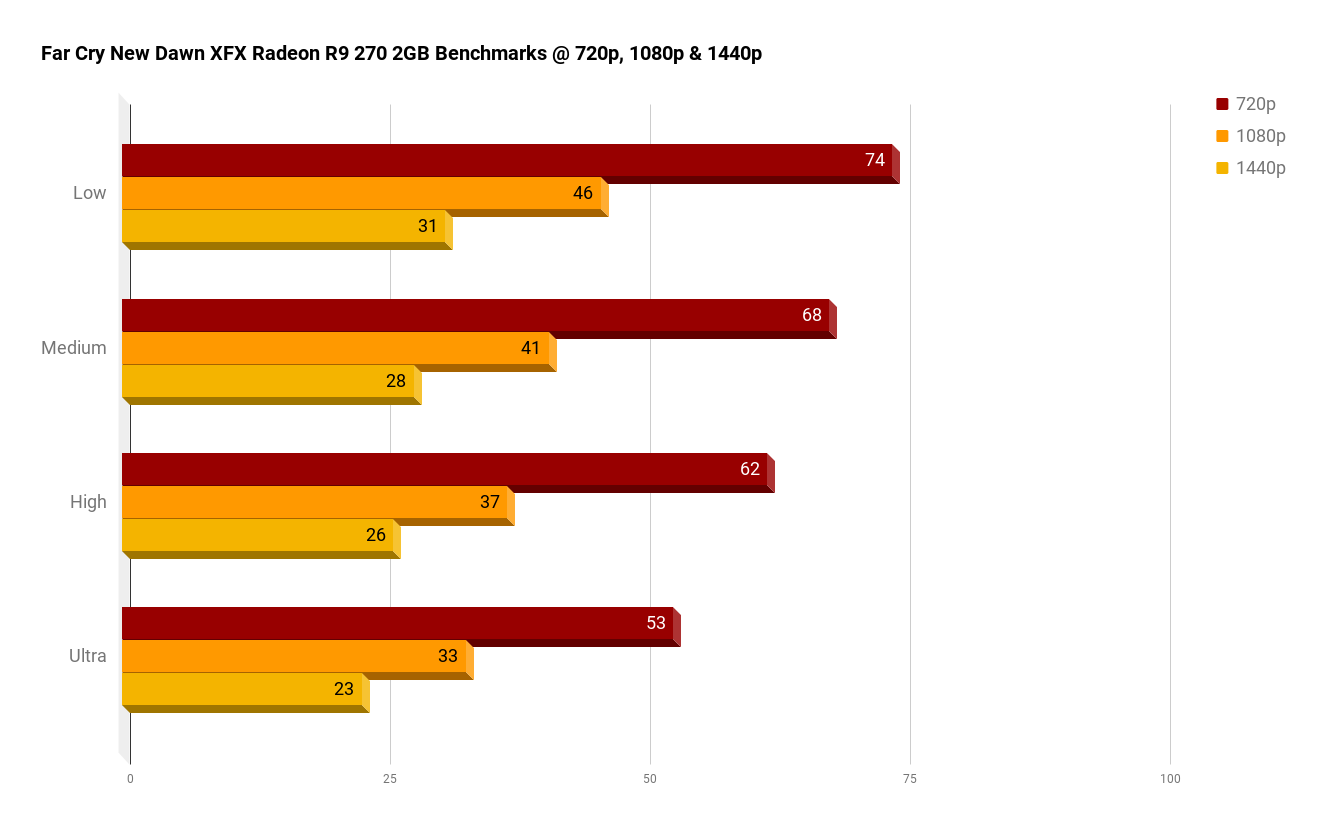 Despite coming in below the minimum spec, we can see the Radeon R9 370 is still perfectly capable of running Far Cry New Dawn. In fact, if you're prepared to drop to 720p you can squeeze out more than 60 frames per second on High. 900p on Medium also isn't totally out of the question. However, if you're desperate for higher resolutions then a locked 30fps @ 1080p/High also sounds like a worthy route. This won't feel great with a mouse but should be if you're using a gamepad. Considering it's below FCND's minimum spec though, the Radeon R9 270 can still crank out stronger performance than the base Xbox One version. 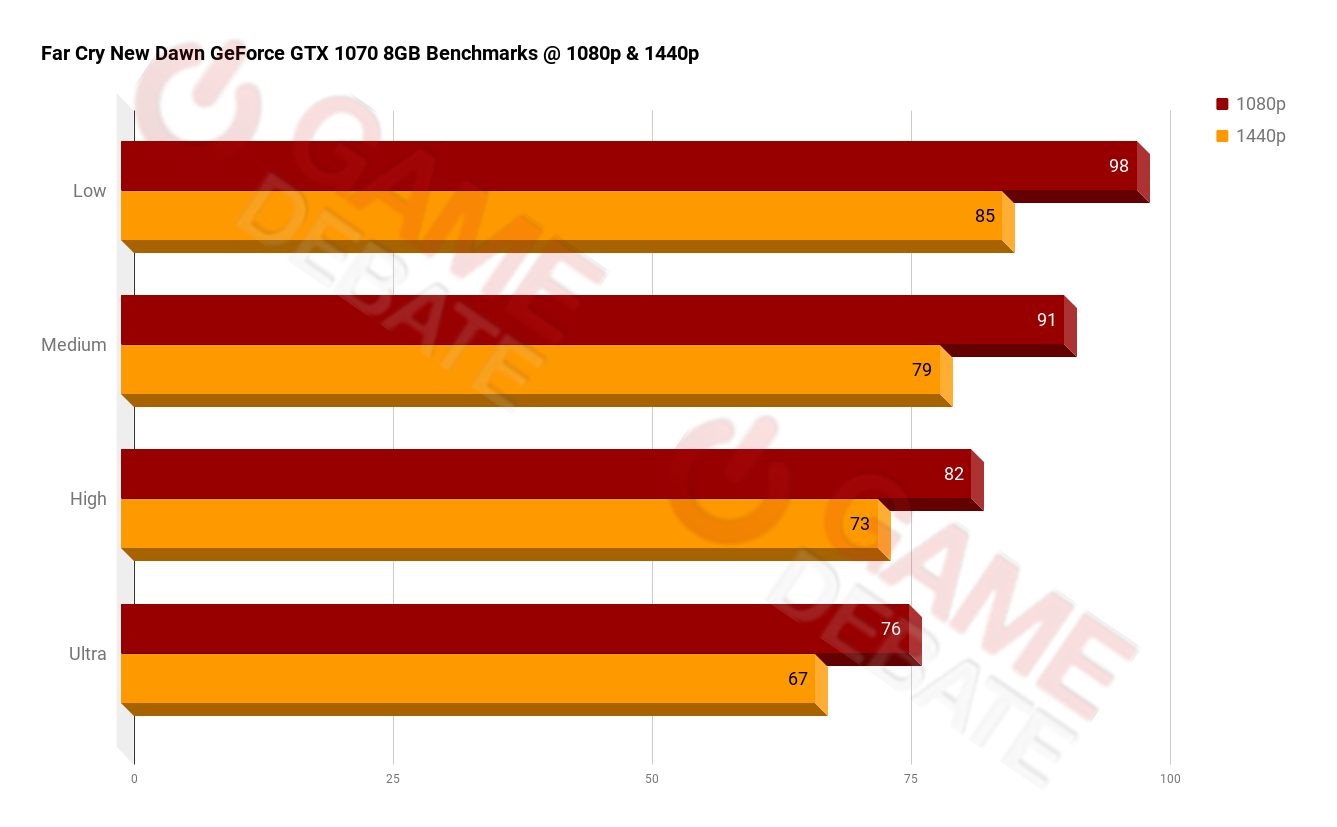 Jumping up a few gears, the GeForce GTX 1070 is a previous-gen high-end video card that still packs a punch two years later. For those looking at 60fps in Far Cry New Dawn, the GTX 1070 is overkill at 1080p and can still a nearly locked 60 frames per second on Ultra @ 1440p. There were a few dips just under but nothing overly troublesome.

The newest arrival in our repertoire, PNY's GeForce RTX 2060 6GB XLR8 is the entry-level RTX experience. Far Cry New Dawn doesn't utilise any RTX-exclusive features so this is a great test of value for money outside of doodads like ray-tracing and DLSS. 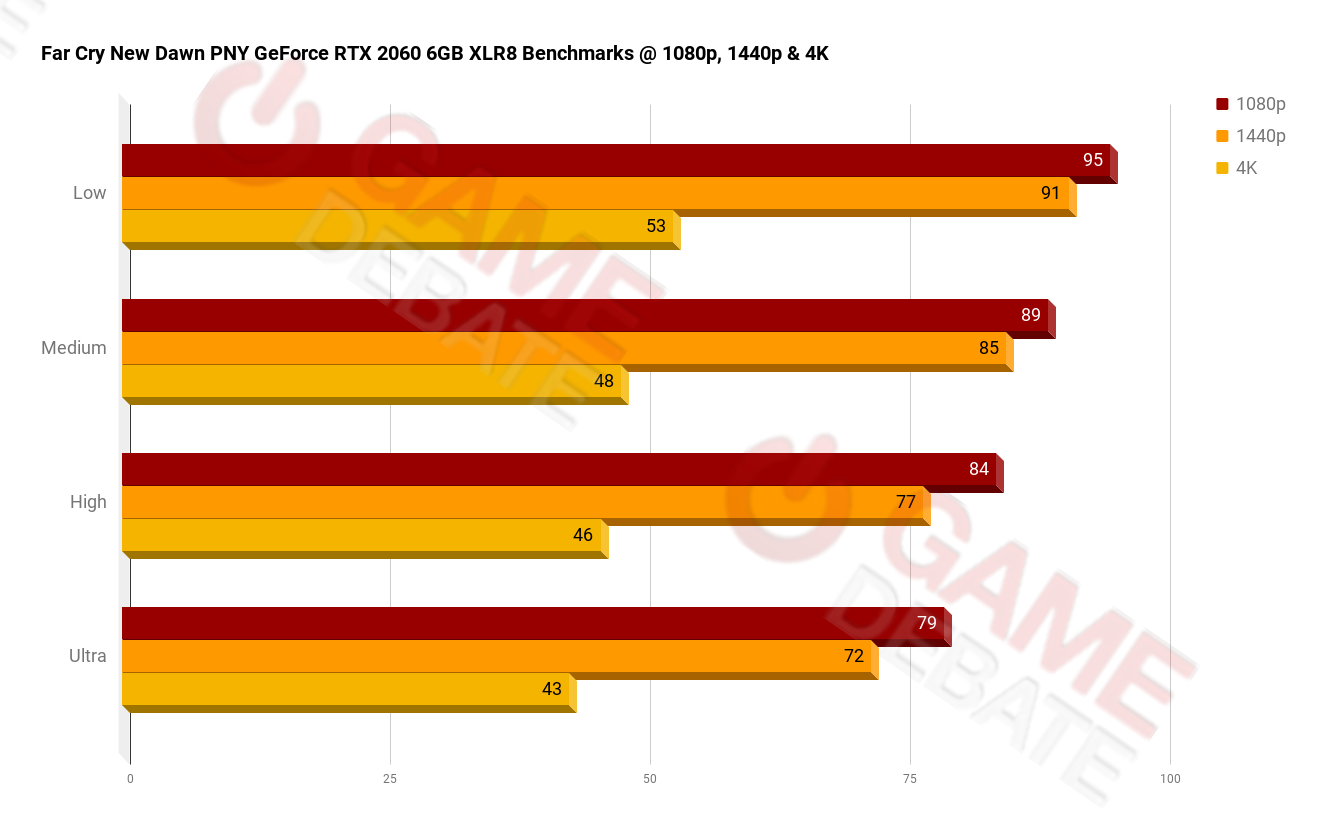 Unsurprisingly, the PNY RTX 2060 does a great job. Performance is roughly on par with the GTX 1070, but more on that below. A totally locked 60fps on Ultra 1440p is achievable though, as is a locked 4K 30fps experience that trumps the Xbox One X. For those gaming at 1080p the RTX 2060 really is a dream. It offers plenty of performance overheard that means it should be very comfortable at this resolution for some time, outside of the obvious ray-tracing demands which could crater performance.

The new generation of video cards also brought about another leap in pricing. At £330 the RTX 2060 costs as much as the GeForce GTX 1070 did at its own launch in 2016. As you can see though, you're not getting a fantastic deal for your money. The RTX 2060's performance is just a few percentage points ahead of the GTX 1070 despite being two years newer and retailing for the same MSRP. The RTX 2060 does make stronger gains at 1440p though. The faster 6GB of GDDR6 memory manages to outstrip the 8GB GDDR5 found on the GTX 1070.

A major caveat to all of this is that it looks as if Far Cry New Dawn becomes extremely CPU-intensive at 1080p and it's here where the frames look as if they could be lost. The GeForce RTX 2060 is feasibly being held back by the Core i7-5820K due to its fairly low clock speed, meaning you're going to want to pair it with a modern high clock speed CPU to get the best out of the RTX 2060.

Looking at the CPU usage, Far Cry New Dawn leans heavily on a single thread for much of its processing, restricting the full capabilities of the GeForce RTX 2060. 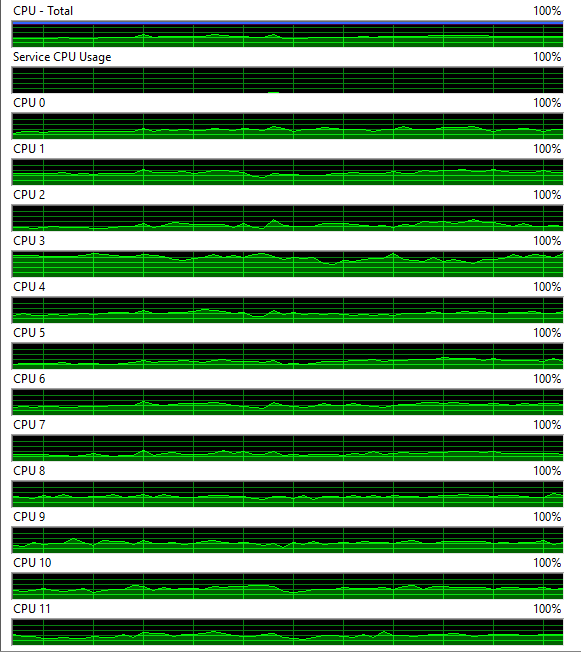 All in all, Far Cry New Dawn, somewhat predictably, performs very similarly to last year's Far Cry 5. It's a glorified expansion pack more than anything, packing a colour palette swap rather than any major tech improvements. If you could run Far Cry 5 then you shouldn't have issues here either. And, well, if you haven't played Far Cry 5 just yet, that's also probably the better place to start.

can we get a gtx1060 ultra version of these charts?