Google Could be Unveiling Its Dedicated Games Console on March 19th

Google has started sending out press invites to a gaming-related event due to take place on March 19th. This tallies up with rumours that have persisted over the last year that Google has been planning take on the might of PlayStation and Xbox. Nintendo, well, they march to the beat of their own drum and we’ve long ago learned they’re unpredictable and tenacious.

The barebones invite from Google tells invitees to “Gather around” at 10am on March 19th in Moscone South, San Francisco, where Google will be dropping a gaming-centric Google Keynote. 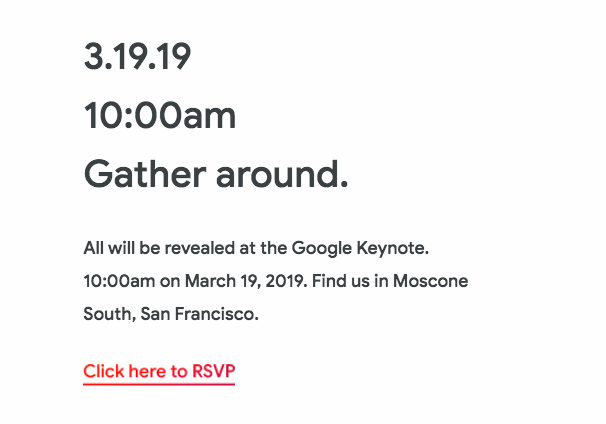 The last we heard of a Google console was all the way back in June of last year, where rumours swirled Google was planning to attempt a three-pronged attack with a streaming platform, a dedicated home console, and aggressively bringing onboard major game acquisitions. Gulp.

Kotaku’s Jason Schreier has suggested serious bucks have been invested into both streaming infrastructure and game development, all of which should hopefully come to pass during the reveal. Google’s got its work cut out if it wants to convince users that it’s not just another Android streaming box, so AAA, desirable games are surely seen as a must for the platform.

In terms of the hardware, we have doubts Google would even think about targeting a high-end expensive gaming device. The focus is surely going to be on streaming, another hurdle that Google is going to need its customers to overcome. There is the possibility of native gaming but Google historically isn’t interested in loss-leading or expensive hardware.

There’s exactly one month to go until Google’s gaming keynote, what do you think could be in store? Does Google have the potential to disrupt the gaming market, or will this end up an aborted attempt?

Did anyone ask for google to get into gaming?

I swear, we'll need adblocker plugins for our games soon...

Get ready for in-game ads and ridiculous in-game purchases.

Hope not, also never played it.

Depending on which segment of Gamer's they target it will depend. They target Seasoned Gamer's like us then yeah their system no matter how good would be bashed and criticized but ultimately refined super fast with some really constructive

criticism from guys who have dealt with such systems for year's. but it can be a Marketing and PR Disaster and quite possibly scare away any casual (mobile) gamer's. But if they target mobile gamer's they are introducing guys who play candy

boost game YouTube game streaming, slowly steadily introduce a few AAA games from ubisoft (they've already tested it) and then get a large player base and it'll automaticly convice DEVs to move their AAA Game's over (dont expect PVP) SINGLE

Player, Story based games will thrive here Maybe Co-Op but PVE at best dont expect Rainbow 6 or Battlefield to work here and any racing game as well.

we might get alot of classic Game's here think about the classic Splinter Cell, Project IGI etc.
RTS GAMEs might just end up getting really big and evolve like crazy Cant wait for the next CIVILIZATION or even stuff like SONY's Until Dawn

games like TellTale did might just end up going mainsteam possibly even bigger then FPS shooters so yeah this is actually interesting. the potential for DIFFERENT Kinds of Gamng is huge Traditional Games still need a Strong System THE END.

But can it beat ze Soulja boi console tho???

Would anyone here use Google's cloud gaming services if they offer the following:
A) They price it around how Netflix has ($8 - $15)
B) Large library of indie, retro and AAA titles

I would give it a go, sure, might as well check it out for a month

I have serious doubts that Google will have success in that endeavor.

Until it has been proven that streaming games works 99.999% of the time ppl aren't going to jump on the bandwagon.

I can just see this headline, Google introduces new metric to record what people do in video games to tailor ads even farther

A keylogger, to log what you do in-game... But then you minimize the game to pay the bills or send some money... the keylogger spazzes out and starts recording your desktop keys outside of game, gets your bank details, then the google cloud will get hacked and you'll end up poor xD

But it's ok. Better ads.

Did anyone ask for google to get into gaming?

I swear, we'll need adblocker plugins for our games soon...

let's not forget Google is already providing biggest platform game store - Google Play, for all Android devices,
it's just a matter of time they push competition off the cliff

Anything that wants me to stream my games is going to get a hard no from me.

Why do i get the feeling it will be another Android console that will rely on the Google Play store.

Because that would be the logical conclusion :D

and besides most of the games are just cash grab anyway

Well if you are using something like the Nvidia Shield instead you do have android exclusives on there like Borderlands 2 as an example :P