You’d struggle to call a CPU such as the Intel Core i7-5820K low-end. Launching at the end of 2014, it’s getting on a bit in years but this is a CPU that can handle basically anything you can throw at it. During our benchmark tests for Far Cry New Dawn though, we discovered the PNY XLR8 GeForce RTX 2060 6GB was too much for it to handle.

During our original testing runs it scored 72 frames per second at 1080p/Ultra in New Dawn, and it initially seemed as if the CPU wasn’t being overly utilised. However, it quickly became apparent Far Cry New Dawn is heavily reliant on a single thread. That’s disappointing in this day and age. It means that you need a very high-clocked processor in order to take advantage of high frames at 1080p.

Today I delved a little deeper and ran some additional benchmark runs in Far Cry: New Dawn, this time testing the impact of clock speed. And, sure enough, we discovered the GeForce RTX 2060 was being noticeably hamstrung by the Core i7-5820K.

Following on from our benchmarks in Far Cry New Dawn over the weekend, today we're looking at the impact of CPU clock speed core count on FC:ND performance. The processor we're using is the 6-core/12-thread Intel Core i7-5820K, nitially running at stock clock speeds (3.3GHz) before rising up to 4.2 GHz. The official Far Cry New Dawn benchmark tool was used for these tests in order to replicate the test runs as best as possible. 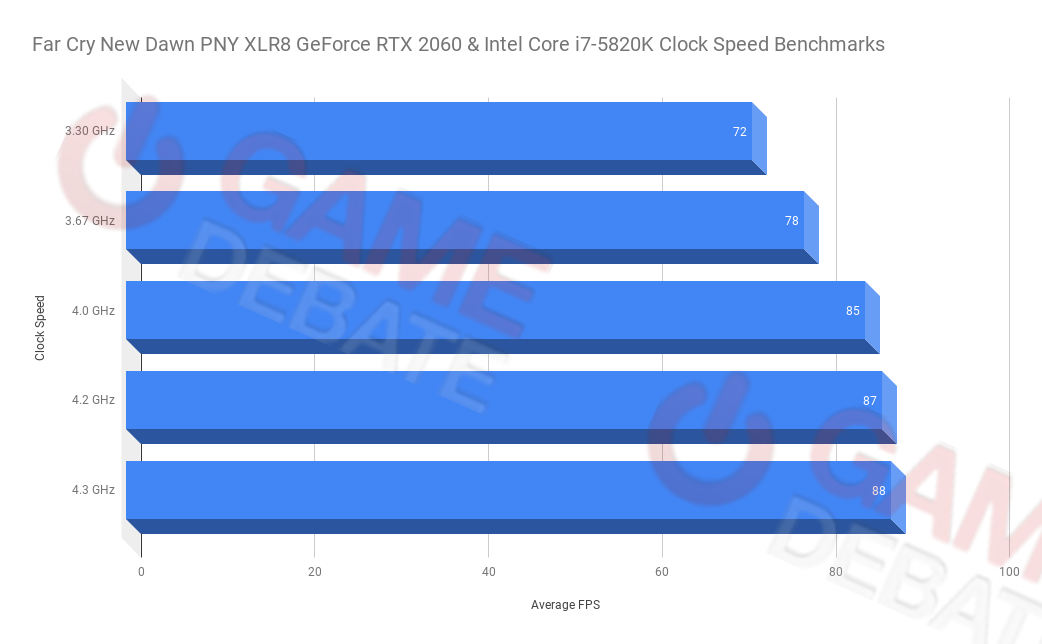 As you can see it's a case of diminishing returns as we up the clock speeds but, due to Far Cry New Dawn's focus on a single thread, the GeForce RTX 2060 can't really begin to stretch its legs until it's clocked at 4.0GHz, at least. Running FC: ND with an RTX 2060 and a 3.3 causes the RTX 2060 to run at just 81% of its potential capacity.

During our testing of the RTX 2060, instances of this are rare, but when poor multithreaded performance does become an issue, it can really hamstring the RTX 2060's performance. If you're planning in picking up Nvidia's entry-level RTX graphics card then you'll also want to put it with great CPU as well, particularly if you're playing at lower resolutions such as 1080p. Just a little something to bear in mind.

I always said that certain games, especially FarCry ones, rely a lot on the CPU. To the point where I can go to places where there's no fps difference between 1080p and 5K on my rig! Ubisoft likes to bomb the CPUs with draw calls. I wonder if DX12 would help with that...if they even cared to develop using it...

Game runs very well for me. CPU usually sits at about 30% usage.

CPU usage doesn't tell the whole story. You can have 100% CPU usage without utilizing all the instructions and execution units in your CPUs, just because a few instructions are spammed along with many stalls and awaits, which is basically a software limitation, forced upon a CPU. Then there can be the case of every component you have, being at much less than 30% and still, the game would run like crap, like ARMA 2 for example, again software limitation XD

lmao, whats up with the downvotes?:D

I'm used to them, people just like downvoting me XD

Its about time to put our cpus to rest (I'm waiting for Zen 2).

I'm glad i upgraded my 4690k, only thing ive seen come close to maxing out my CPU is playing Siege uncapped and streaming at the same time haha. Pegs all cores at 4.05ghz like 90% usage.

There must be something wrong with your PC mate, i've never ever had anything near 100% CPU usage, and I have the same one, only clocked to 4,8GHz

Well, mine isnt so it reaches only to 3.8GHz

Far Cry New Dawn has been crack, so.. you know..
...you could try it out to test-out your CPU & confirm the results for yourselves ^^

game sucks though, so not even sure if its worth the free download even..

dislikes, yes...
oh ok, so its because of people like you that like this sort of copy/paste sequels, that we almost never get new good games anymore... fine, enjoy your crap gameS! Yes, games!
Seriously, so now the notion that a game is not worse than before is enough to be seen as "passable" & "good"??

Have you played the game at all? That's the only thing I want to know. I got the game for my birthday and I'm having a blast with it. I love the game. It's Far Cry and it's fun. Honestly, even Jim Sterling said that it was a "perfectly adequate time waster" and "funner than Metro Exodus", and I'm pretty sure that saying those statements caused him real physical pain.

yes, I tried it out - I really dislike the horrible color palette, that's been sh*t all over the place. The gameplay & overall experience is the same since FC 4 (except the setting there was interesting & kind of adequate for its location).
When they said post-apocalyptic setting, I was expecting something very different - like, more of a Mad-max feel to it - this is why I'm so butthurt.

And if you read my last statement, we should NOT applaud the game just for not being worse than the previous - that is not progress!
If we continue to feed UBISOFT for these copy/pasted sequels (and its not even Far cry only! All of their recent games!), things can only get worse! They have the resources to make e tremendous / deep / endevourus open world experience, so I think its time for them to finally try & make something original (not just rely on silly chaos...)

you might have a point, but, does it hurt to ask nicely and not be salty ? there are a various statements that can be attached to saltiness to make a joke, this however is not funny

every review you see has them except here...why?

well, you have a point, 1% lows been standard for a while now

I always said that for price perspective, high refresh gaming in AAA games is not worth unless you want to drop nice sum of money from time to time for upgrades. 60hz is totally normal for your regular folk. So unless you want 144hz ish performance i wouldnt worry with your cpu clockspeed.

Once you go 144Hz it's hard to go back but im fine with 60 + FPS in singeplayer games as long as it's close to 100 for that smoothness.

im not starting another discussion if 144hz worth or not. I have been using 144hz monitor for 4 years and iv done bunch of tests with other 60hz ips monitor. I could jump to 60hz its not that bad just need to get used to it again. It is very subjective topic. Is it better? Of course yes, is it noticeable? yes. Is it cheap? no. Is it worth for average build? no.

You're right it's not a good option for an average or a budget build but if you're anywhere on the higher end of the things the difference it makes to the overall game experience is worth it.

For me the best choice is 75hz.If my rig is not powerfull enough for a title i lock it at 60hz,and if i play a shooter or a racing game,from 60 to 75 fps it's a night&day difference.