Mortal Kombat 11 came to PC yesterday evening, day and date with the console version, which is certainly something we could get used to. MK11 on PC is a game with a few teething problems but overall it runs great.

As with the majority of fighting games, Mortal Kombat 11's game logic is tied to the frame rate. 60fps is the cap and there's currently no way to get around it, or indeed even a need to. Playing at over 60fps would fundamentally break the game. 60 frames per second should absolutely be your target while playing MK11 though, else you could find yourself at a competitive disadvantage. Our advice is to drop every graphics setting you need to in order to achieve a locked 60fps. Failing that, use a tool like MSI Afterburner to cap your frame rate at 30fps. You're not going to want a fluctuating frame rate.

We've put together a Mortal Kombat 11 PC performance guide to help you achieve the perfect balance between great visuals and that all-important 60 frames per second. We've benchmarked each one of MK11's list of graphics options for their FPS impact.

Using the chart below, you can find out just how demanding each graphics option is in Mortal Kombat XI, demonstrating the percentage drop in frame rates when turning the graphics setting from Minimum to Maximum. This can provide an at-a-glance look at which graphics settings affect the frame rate the most in MK11.

Together with this, we've given priority scores based on how important we believe it is to enable these graphics options for the optimum PC gaming experience with Mortal Kombat 11.

For the benchmark results below we used an XFX Radeon R7 370, an Intel Core i7-5820K processor clocked at 4.2 GHz, and 16GB DDR4 memory. The tests were performed at 1440p in order to reliably produce FPS results below the 60fps hard-locked frame rate cap.

The further right the bar goes, the more demanding the graphics option is. Down below the chart we've also provided priority ratings. Graphics settings with high priority and a low performance impact are recommended to enable first. Those with low priority are deemed luxury graphics options. 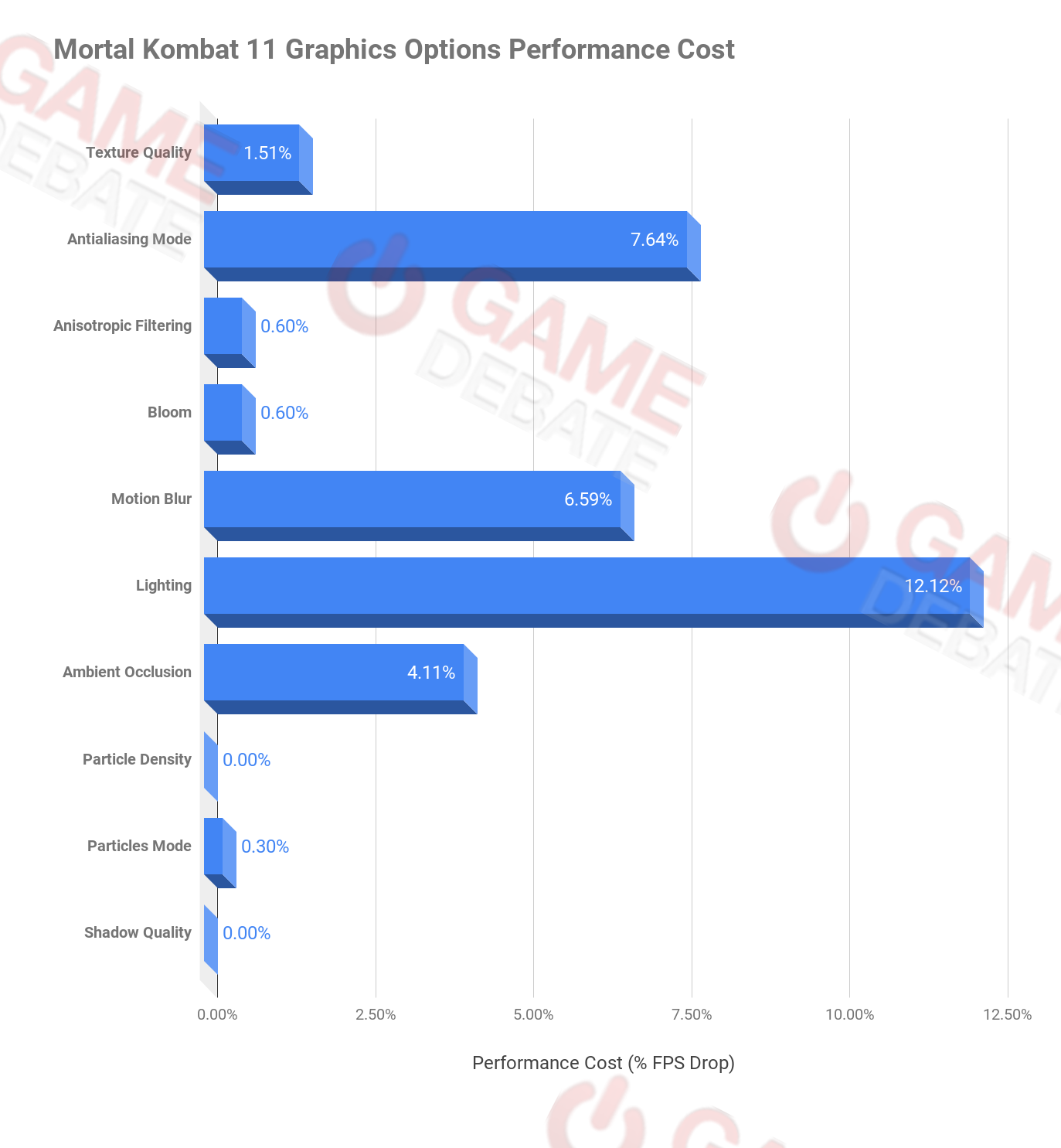 What are the most demanding graphics options in Mortal Kombat 11?

Three key graphics settings form the bulk of Mortal Kombat 11's graphical demands. They are antialiasing, lighting, and motion blur. The latter provides a 6.59% frame rate hit that just shouldn't really be there, and should be the first thing to strike off if you need to hit that buttery smooth 60fps. Both antialiasing and lighting are graphics settings that add a great deal to Mortal Kombat 11's visual quality, but you may have to make some tradeoffs and set these to FXAA and Medium respectively.

Texture Quality affects the resolution of the textures used in Mortal Kombat 11. The higher the setting, the greater the resolution. This improves the detail and clarity of in-game textures although its performance impact is VRAM and RAM-dependant.

There are four antialiasing options in MK11 - Off, FXAA, TAA, and FXAA+TAA. Antialiasing softens jagged edges on objects and so turning AA 'Off' will result in the lowest image quality. FXAA is the base form and slightly softens edges for a minimal performance impact; TAA is a more advanced technique which produces a clearer image; FXAA + TAA combines the two for optimum visual quality. AA is ultimately one of the most demanding graphics options in Mortal Kombat 11, although you should be able to find a happy medium between the three AA options.

Anisotropic Filtering, or AF, concerns the visual clarity of textures when viewed at oblique angles. Its impact on Mortal Kombat 11's frame rate is negligible so it's definitely worth cranking this setting up.

A matter of personal taste more than anything, Bloom is an effect that produces halo-like fringes of light to bleed from intense light sources. Bloom has little no impact on MK11's frame rates so enable or disable depending on your visual preference.

The single most demanding graphics option in Mortal Kombat 11, Lighting adjust the complexity of lighting on game objects, characters, and the environment. The higher the Lighting setting, the more realistic the lighting effects. Lighting causes the biggest hit on frame rates but it's also a large factor in visual quality. However, you can shift Lighting to Medium for a nice balance between graphical fidelity and performance.

Ambient Occlusion is a rendering technique which affects lighting and brightness of objects when nearby to one another. In Mortal Kombat 11 this GPU-dependent setting does affect frame rates slightly, although it improves overall fidelity nicely.

Mortal Kombat 11 is a particularly Particle-heavy game, especially where some of the special moves are concerned. Particle Density affects the number of particle effects generated on-screen at one time, including sparks, blood droplets, etc. Much of the load comes down to your graphics card, although during our testing we found even High had little to no effect on frame rates.

Particles Mode is a slightly unusual option in that it doesn't concern Low, Medium, High settings. Instead, users can choose whether their CPU or GPU is responsible for rendering particles. By default, the GPU is used, although you should set this to whichever hardware you feel is the least bottlenecked. If you have a high-end CPU, set Particles Mode to CPU; high-end GPU set Particles Mode to GPU.

Ordinarily, we'd expect a Shadow Quality graphics setting to have a large impact on both frame rates and image quality. In MK11, Shadow Quality has very little impact on FPS so make sure to get this as high as you can for improved shadow detail and resolution on characters and environmental shadows.

wait Shadow Quality have no impact on peformance?
thats usually the most demanding setting in games