Port duties for Mortal Kombat 11 have been handled by port specialists QLOC, who also worked on bringing Mortal Kombat X to PC. Before those alarm bells start ringing though, we've taken a look at Mortal Kombat 11's PC performance, as well as identifying any potential issues in our port report. Breathe easy, it ain't as disastrous, although it's not exactly perfect either...

One of the first and most important things to highlight is Mortal Kombat 11 utilises a locked 60fps. Game logic is tied to frame rate so this has been locked down for a reason, and any attempts to unlock MK11’s frame rate would just fundamentally break the game. This is pretty standard for a fighting game, particularly a competitive one where a level playing field is a must.

Keeping on the same sort of topic for a moment, it should also be an absolute priority for you to keep a steady 60fps in Mortal Kombat 11. If this cannot be achieved on your rig, even with low graphics settings, then you may be best off using a tool such as MSI Afterburner/RivaTuner to lock your frame rate to 30fps. This obviously won’t be as smooth as 60 frames per second but what do you not want is a fluctuating frame rate.

When it comes to performance, Mortal Kombat 11 seems to run pretty damn well. It’s certainly a whole lot better than Mortal Kombat X at launch. However, there are a few caveats.

Firstly,  ultrawide screen resolution support is a bit broken, which is disappointing to see. Gameplay is 21:9 but all the menus and the cutscenes are 16:9 with borders, as is the Krypt.

Secondly, the background animations appear to run at 30 fps, possibly even lower, and there are no options to change this. Considering Mortal Kombat 11 is fairly easy to run, it’s a little confusing why would this need to be the case. Even worse, this 30fps frame rate lock also inexplicably extends to Fatalities, cutscenes, menus, and the Krypt. Normal gameplay is 60 fps and then this figure plummets to 30 fps during the X-ray attacks and the like. As it currently stands there are no solutions to either of these problems.

And thirdly, TAA (Temporal Anti-Aliasing) is currently implemented fairly poorly and contributes to muddy image quality and a strange ghosting effect. It may even be flat out broken, although this is nothing a simple patch wouldn’t fix.

One final issue, and this isn’t really PC-specific, is MK11 is very reliant on an online connection. Even when playing single-player, info for pretty much all the stuff you do and unlocks you earn are stored server-side. Lose your net connection and you basically have to play Mortal Kombat 11 with a blank slate and anything you earn in modes like the Krypt and Klassic Towers will be lost. However, you can play the story mode and anything you earn will be stashed even if you’re offline. Some of these modes really shouldn’t rely on an online connection so this is definitely disappointing to see, and we can certainly see this causing a few problems, in particular,  for any folks who choose to sail the high seas. But, those folks aren’t NetherRealms problem, are they?

That catalog of issues of aside, Mortal Kombat 11 does perform well on PC, provided you can meet those all important minimum specs. We've tested it with both a Radeon R7 370, which is fairly equivalent to the minimum spec Radeon R9 270, as well as with a mid to high-end GeForce RTX 2060. 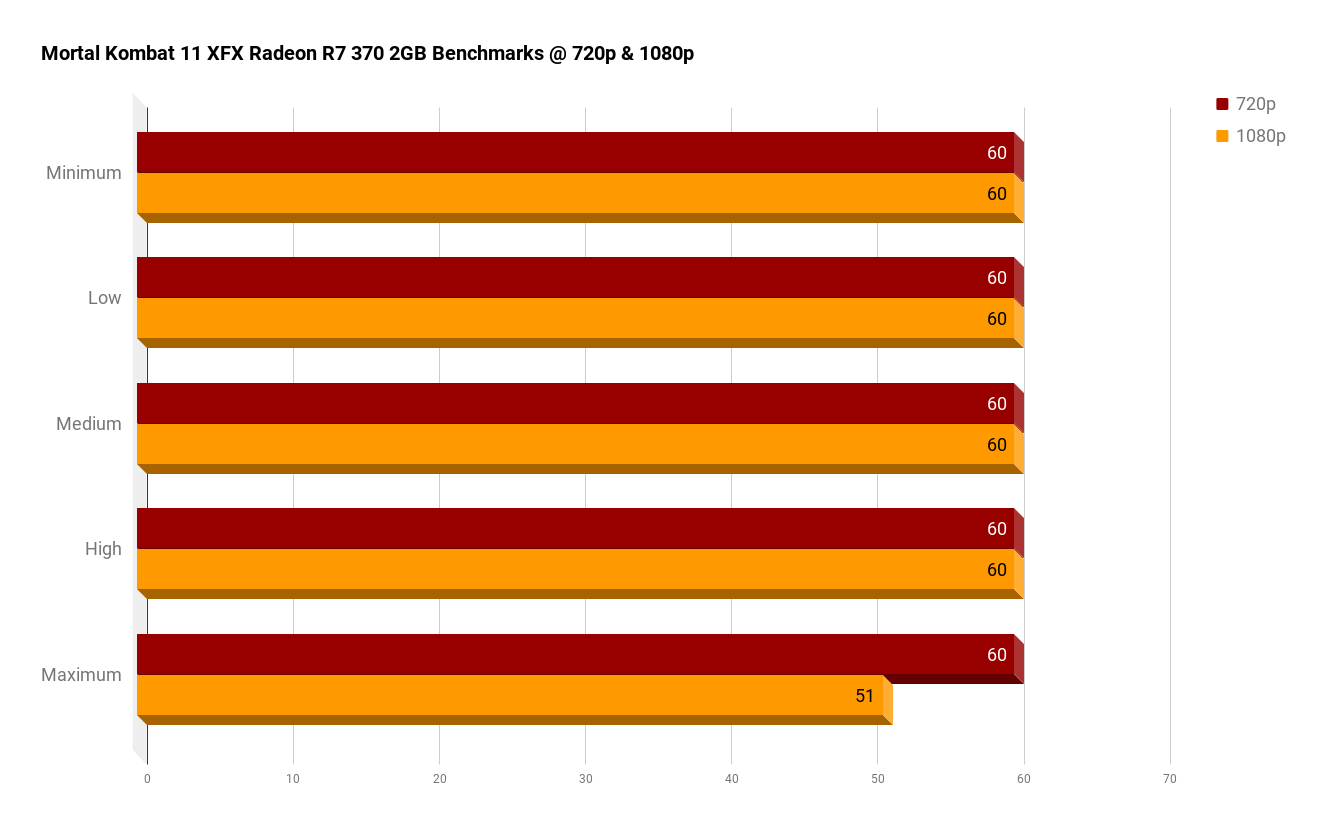 60 frames per second are very achievable even for mid and low-end graphics cards provided you play at lower resolutions and/or make use of the ‘Dynamic Resolution’ toggle. With a 2GB Radeon R9 270, I was able to hit  60fps at 1080p/High, albeit with some (fairly major) dips. Enabling dynamic resolutions helps to ease up on these dips though, dropping the resolution on-the-fly in order to maintain a steady frame rate.

Dynamic resolution isn't exactly an ideal solution but when you're playing MK11 with what is essentially a minimum spec GPU then there's little choice. Frame rate drops and stutters were few and far between but they can prove very disruptive to gameplay, so it would certainly be worth considering 900p or 720p in order to achieve the most stable gameplay possible in MK XI. 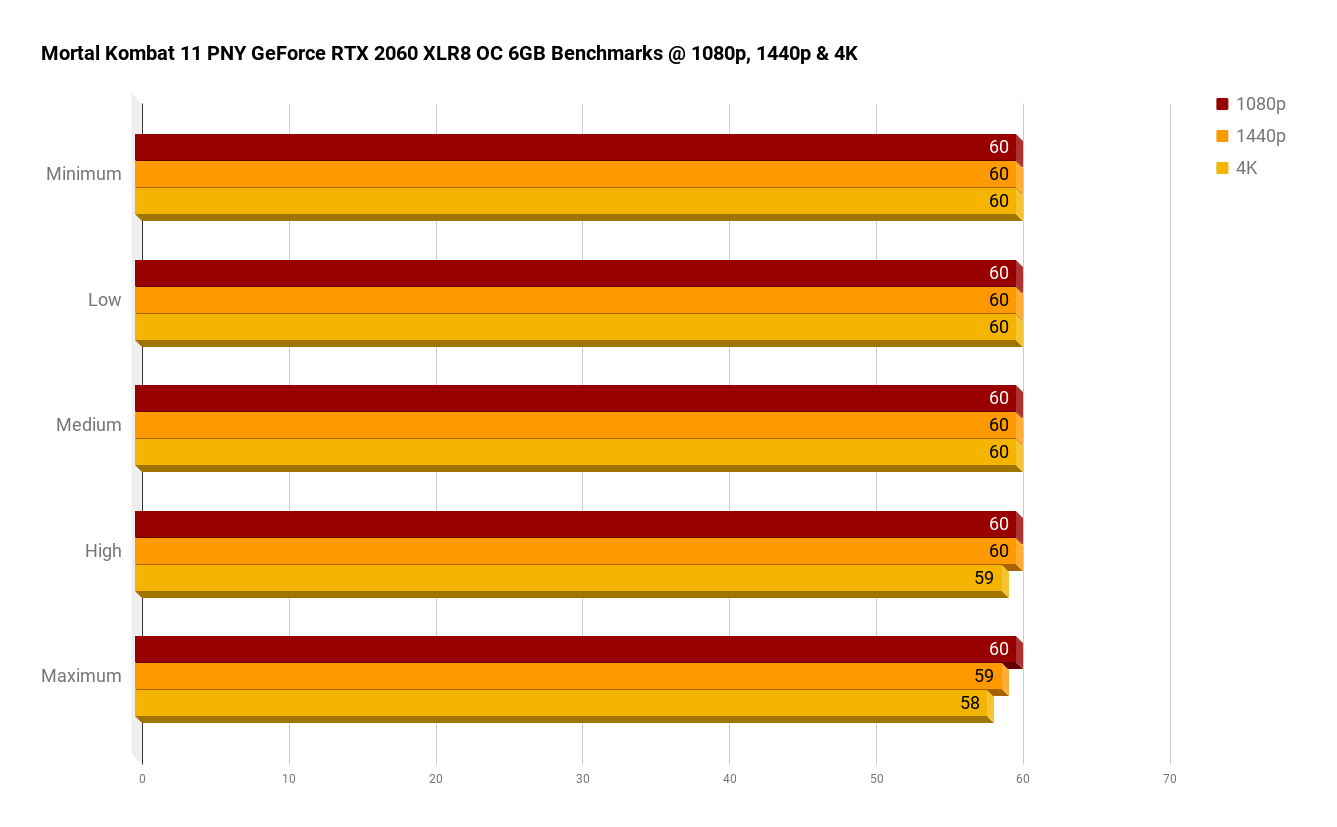 The GeForce RTX 2060, meanwhile, absolutely blasted through any benchmarks. The only time the RTX 2060 really broke a sweat was on 4K/Ultra. It still averaged 58 FPS but did have a low of 50.6 FPS. It’s impressive stuff though, and turning Lighting down to Medium was sufficient to achieve a locked 4K/60.

Actual benchmark graphs feel a bit surplus to requirements with the 60fps cap, but as you can see the GeForce RTX 2060 performed very decently indeed during testing. 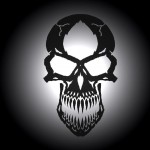 My question is regarding this and I quote:

If it's A then that's a real big con. which is quite unpleasant and if it's B then I can live with that. :)

So stupid they didn't include resolution scaling.

Not bad... Quite a refreshing to see this in these times of so very highly demanding games.

I suppose you need the Fatal1ty motherboard to play it.

I would really appreciate if all benchmarks adopted the 1% & .1% lows (if you'd want a constructive opinion) then again, thank you for the article Jon!

yeah 1% and 0.1% have been around a while dont understand the reluctance to use it msi afterburner records that with a press of a button...

Do ALL maps run the same? In MK X there was that rainy temple map that had ridiculous fps drops for everyone, with the rest of the game running absolutely fine.

I also never understood why they have fatalities/xrays locked at 30fps. Animation keyframes can always be interpolated very easily, especially in cases like these (fixed animation + nice, round framerate doubling), so I can't think of a single excuse of why this is.

Why does the text in the middle of the article reference FC: New Dawn?

I template the designs to keep them a regular layout. Just mistakenly left a bit in

Don't worry about it. I'm just messing with ya.

Well, as long as it made you feel better I guess

I gather from this that it actually runs well and it's not a mess MK10 was on release? That's AMAZING !

It has its own issues of frame drops bud trust me. I bought it and for the most part runs fine. fine enough to enjoy it but not the best experience.

1080p is fine but thing is it has weird bugs bud. The patch fixed some weird frame drops etc. I run it at solid 60fps on 4k ultra but it has issues and bugs that need to fixed.

With a machine as yours that's kinda worrying. Thanks though.

Can confirm. Also a 1080 Ti here and certain fight stages have issues running sub 60 at max settings. I play at 4K with Veryhigh(Ultra) settings.
Particles especially drag fps down from 60 to 50 in some cases.

It is horrible guys.