Panic has been developing Mac software for two decades, more recently turning to games publishing with Firewatch and Untitled Goose Game. Now they’re turning their attention to a most unusual handheld device.

Playdate is a fusion of old and new, offering up a tiny 2.7” monochromatic display with a resolution of 400 x 240. Underneath the hood, there’s USB-C charging support, Bluetooth, WiFi, and a headphone jack. The front of the device is quite Game Boy-like, sporting a d-pad and AB buttons. On the right is something very unusual indeed though - a crank which can be unfolded to form a rotating analogue controller. Surely this means a fishing game must be inbound? The only game shown for the device so far is Crankin’s Time Travel Adventure, a game built exclusively around using the crank. Some other games won’t even use the crank at all. 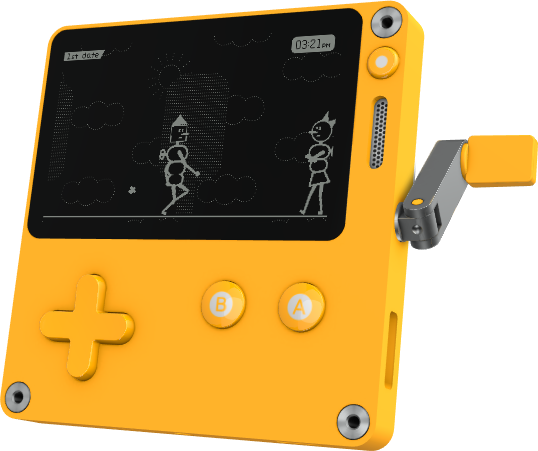 The slick design was created in conjunction with Swedish tech firm Teenage Engineering, and it’s certainly a bit of a looker. It’s probably the most hipster gaming device I’ve seen in my life, to be honest, but there’s an undeniable lure to its retro charm paired with a truly modern method of receiving new software. It helps that it looks remarkably like my old Game Boy Pocket, which is enough to set off the nostalgia alarms. That little yellow beauty fell off a canal boat. Rest in peace, my sweet prince.

Talking of which, Playdate’s $150/£120 price tag includes Season 1 of games. 12 in total, Playdate units will automatically download a new game each week for three months. Users won’t know what these games will be until they’re on the system, it’s just a surprise package each week which could be short or long, simple or complex. Judging from the Season 1 tag slapped on it, it seems safe to assume there are plans in place for further seasons of content.

About those games. We reached out to some of our favorite people, like @KeitaTakahash, @bfod, @helvetica, @shauninman, and many more.

Here's a peek at one: Crankin's Time Travel Adventure, from Keita. It's fun and funny. pic.twitter.com/0Ibwqr5k3I

It’s a very odd thing, no doubt about it. At $150 it’s probably a little expensive to justify unless you’ve fallen in love with the thing, but as a concept, it’s playful in a manner which gaming hardware seldom is these days. Factor in the small supply run, 12 exclusive games, and top-notch design, and it’s easy to see how the Playdate ramped up to this price point, but the value, as ever, is going to come down to the individual user.

Panic says stock of the $150 Playdate will be “very limited”, so if you’re interested then you can register your interest now to be notified when pre-orders go live. Shipping is expected to take place in early 2020.

Kind of disappointed. I thought crank was to charge battery ^^)

This reminds me so much of the member berries from south park. Some people just want to relive the moments of the past so bad. Eventually member berries will be a reality

Meanwhile for the same price you can pick up a used PS Vita, a 200GB SD card and a SD-to-Vita adapter, spend an hour hacking the thing and then enjoy a catalog of PSV, PSP, PS1, etc games and homebrew.

I get that this is a gimmick, but when the above option is available for the same price or less (depending on your ebay hunting skills) - why would anyone bother? A $150 paperweight with one stickman game a week..?

Is this a joke?

DOOM. There was a version for a TI calculator, so that one would be perfect with the monochrome display :D

I bet you have a smartphone.

yes Mr. Wyatt Cheng, I sure do.

Then you are used to the ergonomics.

IDK, these 6 inch phones are pretty much like this thing, pinky or pinky + ring finger underneath grip with both hands, boom just like a phone.

I mean, it's dumb as hell but that's kinda the fun of it?