In week or so since it came out, Total War: Three Kingdoms has enjoyed the best launch yet for a Total War game. Creative Assembly has said it's already smashed through 1 million sales on Steam. It's well deserved, as you can find out in our TW: Three Kingdoms review. Three Kingdoms: Total War can be a very demanding game though, especially when it comes to the CPU. Your processor is tasked with handling large troop numbers, strategic battles, and AI turns.

But what sort of CPU do you actually need to run Total War: Three Kingdoms? In our new benchmark tests, we've taken a look at the performance impact of core count and how well TW3K scales to multiple cores.

Following our GPU benchmarks yesterday, today we're looking at the impact CPU core count has on Total War: 3K's performance. The processor we're using is the 6-core/12-thread Intel Core i7-5820K, running at an overclocked speed of 4.4 GHz (versus 3.3 GHz at stock speeds). We used the official TW:3K benchmark tool for these tests, with an additional CPU core (two threads) disabled for each Three Kingdoms benchmark. Each benchmark test was run on the Low graphics preset in order to best stress test the processor. 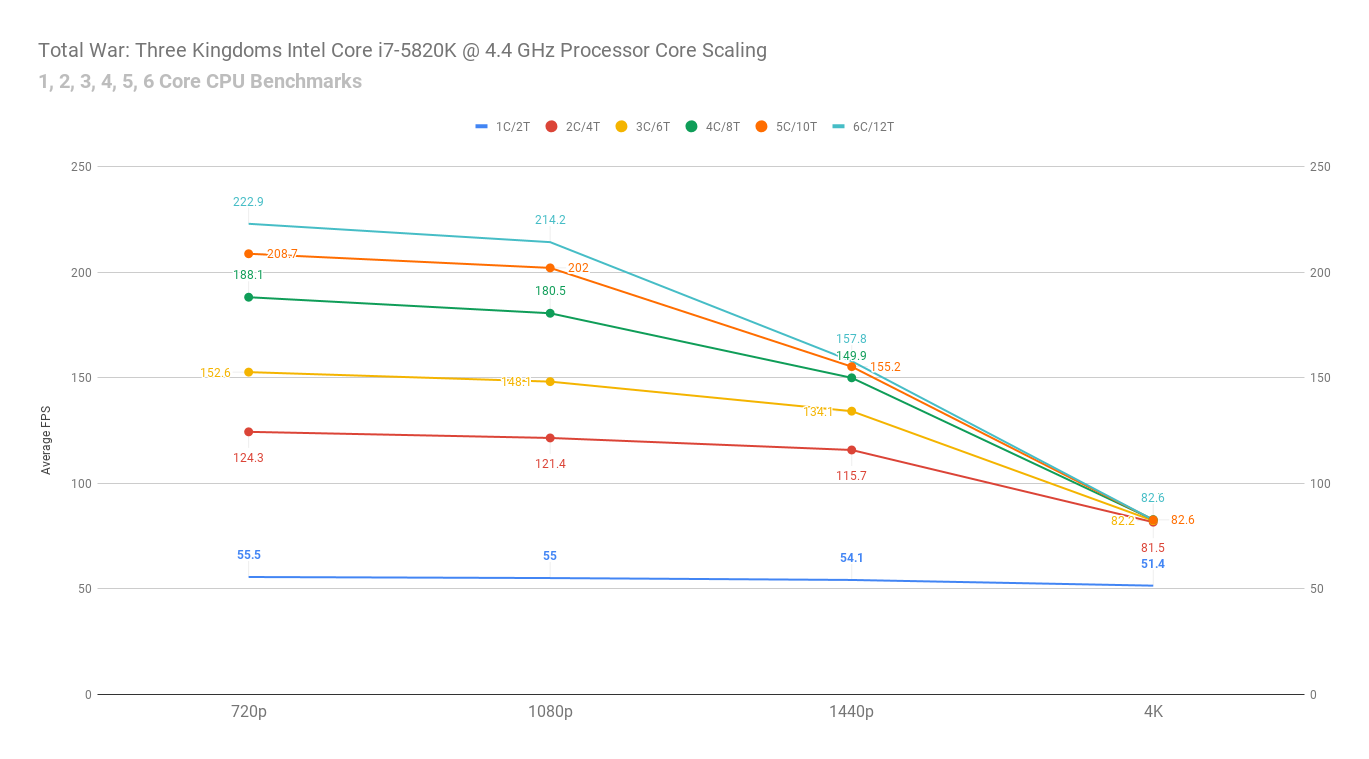 First things first, there are obviously a ton of variables in these results. Core counts and clock speeds don't necessarily translate to similar performance between different architectures and across different brands. This is just a look at guideline performance then, and how well equipped Total War: Three Kingdoms is in terms of scaling performance to high-thread counts, as well as the performance hit you can expect to see on low core count processors.

As you can see, at 4K the RTX 2060 is clearly the bottleneck in this scenario. Performance is almost identical at 4K regardless of the core count. The only result which stands out here is the 1C/2T benchmark which is evidently the CPU bottlenecking. Running Three Kingdoms on a dual-thread processor cripples potential performance and would certainly not be recommended.

Outside of this, we see TW: 3 Kingdoms scales very well to multiple CPU cores, particularly at lower resolutions where the GPU becomes less of a factor. Overall gains as we shift up the cores are fairly regular, indicating Total War: 3K is well-suited to using whatever CPU horsepower you can throw at it.

I am actually quite surprised how well it runs on 1c / 2t. They really spend their time will optimising this game.

Its a nice thread but i feel in these days there should be tests with 8c/16threads too because many newest cpus(including zen 2) have 8 cores with SMT and without.

Considering that from 4 core/8 thread to 6 core/12 thread the improvement is about 15-17%, when you hav 50% higher cores/threads, I'd say that adding 2 more cores/4 more threads to 6 cores/12 threads would add 33% more cores/threads, and probably no more than 5% more perofrmance best case scenario.

that's still an approximate calculation rather than proper test.

Well the 4/8 core/thread to 6/12 core/thread is an actual calculation from the benchmark above. The 5% is an apporoximation, but I can guarantee to you that it's damn near accurate.

For a video game it's very good and since it's an RTS and technically they should be some of the most parallel games out there.